Eat This Now: Amis’s Bucatini With Jalapeño and Almond Pesto 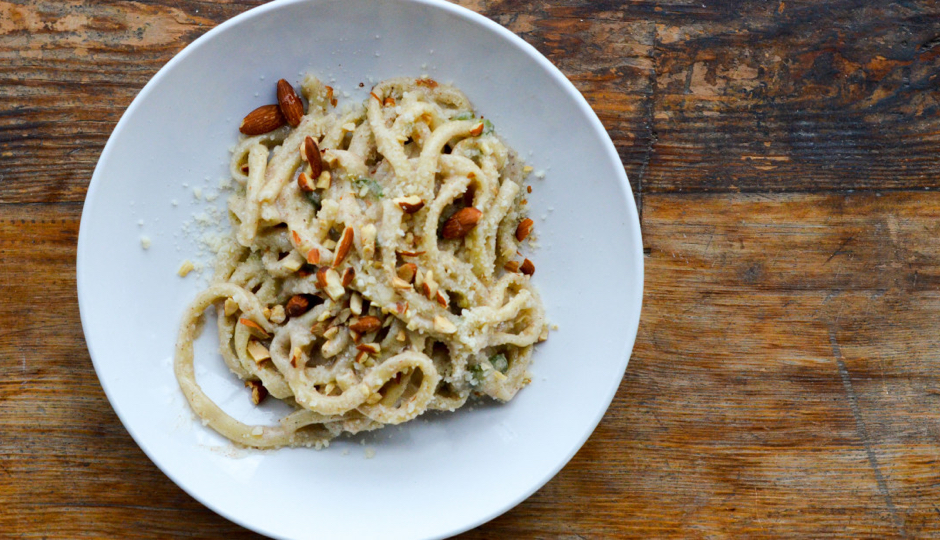 Writing about a pasta dish can feel a little silly. It’s pasta. Pasta is pasta is pasta is pasta. It’s dough that gets formed into fun shapes, so as to distract ourselves from crippling existential dread. Like edible Play-Doh for grown ups.

And sure, there’s good pasta (homemade, delicate, tossed with good ingredients) and bad pasta (overcooked and sloppy), but when was the last time you had a bad plate of pasta in Philly? This city has some of the best Italian chefs in the country — it’s borderline impossible to go wrong. Hell, even our non-Italian restaurants do incredible pasta-work (ever have the ravioli at Le Chéri? Kensington Quarters’s smoked guinea hen fusilli?). Making good pasta in Philly isn’t really that impressive anymore. It’s requisite.

So, how did Amis’s bucatini with jalapeño and almond pesto drive me to this? I’m waxing poetic about a pasta dish (in a city of a million great pasta dishes) made with three exceptionally ordinary ingredients — four if you include parmesan — even though I believe glorifying pasta, a dish traditionally enjoyed by both princes and peasants, is pointless.

But Amis’s chef Brad Spence captured something in this plate. It’s stuck in my head like a catchy pop song. This playful, easy little thing — sweet with garlicky pesto, frisky with jalapeños (uncommon on Italian menus here, but common enough around Italy) — haunts me. And, apparently, others, too.

Spence says he tried to take it off the menu once, but people freaked, so he put it back before the masses had a chance to gather their pitchforks. Now: “It never leaves.”

Han Dynasty’s cold sesame noodles — equally as addicting — inspired the dish. I buy it. It’s got the same personality — nutty, spicy, makes your lips smack. Just a brother from another mother.

Find it at both locations, WashWest and the Navy Yard.