Plus, his hatred of Coors Light and a certain football team. 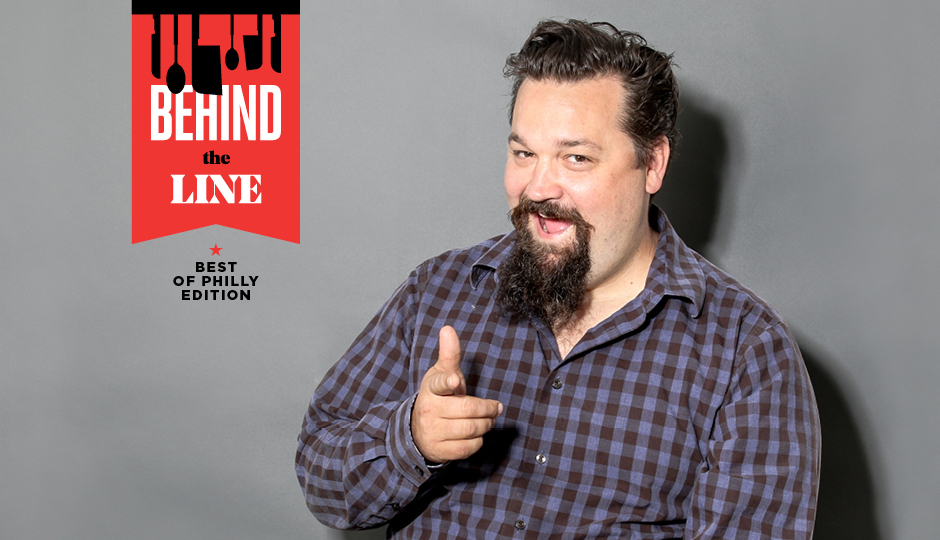 My full name is… Casey Wayne Parker. I was told the reason my name is Casey is that my parents wanted a name that would work whether I was a boy or a girl.

I was born in… Philly at Pennsylvania Hospital, where both of my kids were born, too. Then I grew up in Trenton, then boarding school in Manhattan from 5th through 8th grade, and then I went to public school in Trenton. But I was raised on the Eagles, so, really, I’m all Philly.

I came back to Philly as an adult because… of UARTS. I wanted to act and sing, so I came here in ’93 to go to school there, and I never left. I graduated with a bachelor in musical theater. Did a tour of To Kill a Mockingbird for a few months, worked as an actor and singer for Historic Philadelphia, did some shows at the Arden. And then I decided that I just couldn’t afford to be an actor.

My first restaurant job was… at Tony Clark’s at Broad and Sansom. It’s now a bank. I was a bus boy. And Founders at the Bellevue. And I got a job bartending at Fergie’s Pub, and my life changed. I learned a ton.

I opened my first bar… in 2007. August 29th is our tenth anniversary of Jose Pistola’s. I Can’t believe it.

Next up, I’m opening… Pistola’s Del Sur at Juniper and Passyunk. We’ve always wanted to open up places that are like hanging out in our living room and throwing a party. This is going to be more of a neighborhood spot than the others. I’m leaving the kitchen up to Adán, because he’s incredible at it. And the rest, my partner Joe Gunn and I are figuring out. We’ll have draught margaritas, which I’m very excited about, and we should be open very early in September.

The hardest thing about being a small business owner in Philly is… the triple-net lease, which means you’re responsible for pretty much anything that breaks on the property. That and taxation.

If I opened a Pistola’s outside of Philly, it would be… at the beach. I have a pipe dream that involves a frozen drink stand on some beach. I’d also be intereste in opening in the ‘burbs, but I have this aversion to places where you have to drive to drink, so I dunno.

The Philly Soda Tax is… horrible. Any kind of new taxation in this city is scary, because you don’t believe for a second that it’s going to the right place.

My last meal on death row would be… La Rosa’s pizza with extra cheese and sausage. Well done. And, if I’m allowed to have alcohol, Zinnebir from Brasserie de la Senne, which we’ll try to have on tap at the new spot all the time.

If you’re taking me out for dinner, let’s go to… Wm. Mulherin’s. Vernick a close second.

If I’m buying, let’s go to… Bud & Marilyn’s. That place is really good. Fried chicken, mac-and-cheese, and that Frosé, the frozen rosé.

The worst beer on the planet is… Coors Light. But I’ve never had Not Your Father’s Root Beer, so, who knows?

My secret talent is that I can… roll my belly like a belly dancer. It’s awesome.

My kids refuse to eat… everything. They’re six and four. The only things they eat are chicken nuggets, cheese sandwiches, and peanut butter sandwiches. Oh, and mac-and-cheese but only Annie’s White Chedder, otherwise they won’t touch it. They won’t even eat hot dogs or hamburgers. I can’t deal.

My go-to karaoke song is… Sweet Child o’ Mine.

[Ed Note: Casey has performed with his hair metal tribute band Welcome to My Face, as seen below]

Yelp is… whatever. I used to hate it. Now it’s just whatever. And, I mean, if I go to another city that I don’t know, most of the time I’m looking at Yelp. So there’s that.

The actor who should play me in my biopic is… Michael Madsen. Well, he’s dead. Or Corey Feldman. He’s kind of dead, too.

One Philly operator I really look up to is… William Reed from Standard Tap. He has such a cool eye. And, of course, people like Tom Peters and Fergie have taught me a shit ton. But I wouldn’t mind being as good at my job as William is at his.

The last time I was in a bar fight… wasn’t really a bar fight, but I got knocked out by this guy late at Jose’s. I was walking him out of the bar, and the dude clocked me from behind. When I woke up, one of the bartenders at Fox & Hound across the street had the guy pinned to the ground outside.

One restaurant Philly Mag should really write about is… L’Angolo in South Philly. I usually order a veal chop, but get whatever you want. It’s all good.

You can’t get me to eat… sea urchin. Ick. I’ve tried it, but it’s just not my thing.

To try to stay in shape, I… do bro-ga with Jake Panasevich. Yoga for men. I do it twice a week.

The last thing I ordered at Wawa was… a sausage, egg and cheese classic with mayonnaise and bacon. Delicious. Usually for a hangover.

The thing most people don’t get about this biz is… that it’s really hard to make money. People think you own a restaurant so you must be making beaucoup bucks. Just not the case. You’re there all the time, and you have to work really hard to make good money.

When I want a burger, I go to… Charlie’s Hamburgers in Delco. It’s what McDonalds’ wants to be but never can be.

When I want coffee, I go to… Starbucks. I know, I know.

If someone tells me they want to open a bar, I tell them… to do it! It’s awesome! Well, if they’ve never been in the restaurant business ever, I tell them it’s a very dumb idea. But other than that.

One Philly bar I’ll never go into is… Xfinity Live.

One dive I really love is… McGlinchey’s.

One restaurant trend I wish would die is… cocktails with 27 ingredients.

I cannot fucking stand… the Dallas Cowboys. Dallas sucks, man. Cowboys fans are cockroaches. And there’s lots of convicts on the team. I hate the Cowboys. My wife, her father’s name is Dallas, so for a very brief second when we knew we were having a boy, she started with I’d love to name him after my dad. I was just like, that is not gonna happen. There is one name we cannot name this child.