The split between one of Philly's best Italian chefs and his former employers is as messy as they come. 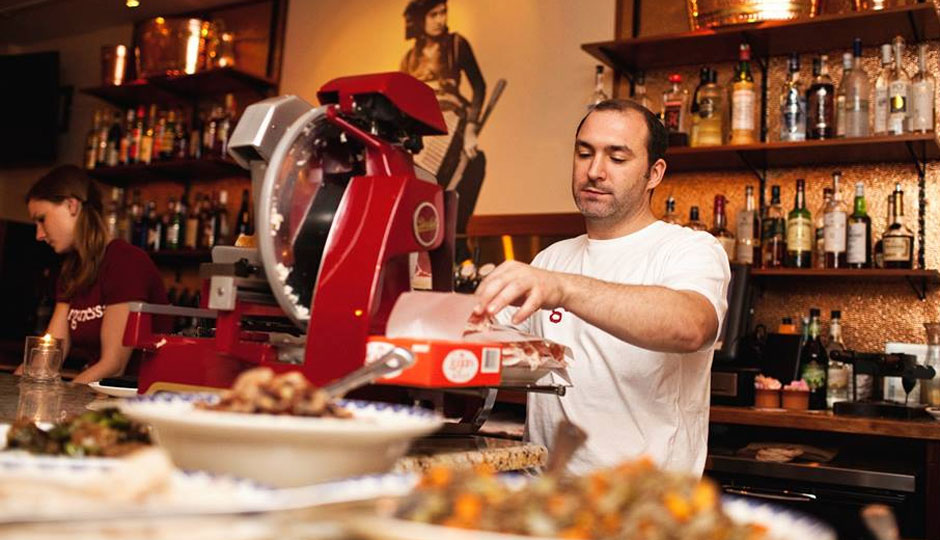 The breakup between Le Virtù and Brigantessa owners Francis Cratil Cretarola and Cathy Lee and chef Joe Cicala culminated in quite the social media frenzy over the weekend.

On July 27th, Cratil Cretarola and Lee notified the press that their new executive chef, Joseph Voller, would be replacing Cicala, Le Virtù’s executive chef of seven years and part-owner of Brigantessa. When Philly Mag reached out to Cicala for a comment that evening, he responded: “I will have no statement until I consult my legal counsel” — which usually indicates trouble behind the scenes.

Such was the case. On Saturday afternoon, July 29th, Cicala and his wife, Angela, released a statement via Facebook regarding the news of Joe’s termination from the company, saying that his firing had come as a “complete shock.” The Cicalas were on vacation in Italy when family and friends who had just read a Philly.com story on the change began texting and calling Joe at around 3 a.m. local time.

But the entire ordeal really began months ago. Cratil Cretarola and Lee were thinking about selling their restaurant, Le Virtù, to the Cicalas. “They approached us [in February],” says Cicala, but they wanted me to stay on until October, which is the month of their 10th anniversary.” (Cicala says October is also the month in which his ownership stake in Brigantessa would increase to 50 percent via a “sweat equity” mechanism built into his Le Virtù contract and dependent on his performance there; Cratil Cretarola tells Philly Mag “There is no such mechanism giving him 50 percent in October. Joe is a minority partner.”)

Cicala didn’t go with her (“I have a family [to support],” he says), but, in a precautionary measure, Cratil Cretarola and Lee posted an ad on Craigslist seeking a new executive chef in case he decided to leave as well. Cicala says he brought it up to Cratil Cretarola in a face-to-face meeting and assured him that he’d stay on: “I’m the chef. I’m a partner of Brigantessa. And I’m going to continue working so we can figure out a plan for the purchase of this restaurant.”

But working as a chef is difficult when your fingers get mangled in a pasta sheeter. Cicala couldn’t work for six weeks after a freak accident destroyed his left hand in May. He says, “I had strict instructions from a workers’-comp attorney that said I shouldn’t work in any capacity while I was accepting benefits.”

That got tricky, because while Cicala was an employee of one restaurant — Le Virtù — he wasn’t of the other. “I’m not an employee of Brigantessa. I’ve never been an employee — I’ve only ever been an owner,” he says. “So, because I’ve never accepted a paycheck from Brigantessa, I don’t have workers’ compensation [from Brigantessa]. My workers’ compensation benefits are from Le Virtù because I’m a salaried employee at Le Virtù.” He grants that he wasn’t responding to corporate emails because he didn’t want to give up his workers’ comp income, but he assures Philly Mag that he was participating as a business owner at Brigantessa in in-person meetings, contrary to a Philly.com report that included a quote by Cratil Cretarola detailing Cicala’s increasing despondency at work: “It had become obvious that Joe wasn’t happy. He wasn’t responding to daily reports. He wasn’t responding to emails. He left everything in our hands. You can’t do this when you’re an owner of a restaurant.”

But it wasn’t the workers’ comp that ultimately caused the break. Nor was it the situation with Angela. It was the tour company Angela started, Antico.

After the Cicalas’ statement went up on Facebook, Cratil Cretarola and Lee retorted with one of their own. In it, they asserted that the Cicalas, via social media, had announced plans to create a tour company, which they hadn’t known about it until they saw the announcement online. Cicala argues that Angela had begun the planning stages for her tour company back in fall 2016, and that Cratil Cretarola and Lee were very much aware of it — it just wasn’t until December that they officially announced it. Cicala says he integrated Antico’s first tour with a management-approved vacation set for July 28th though August 9th.

In Cratil Cretarola and Lee’s statement, they said they weren’t made aware of the tour’s details until the itinerary was all set: “It was never discussed with us, but presented as a done deal. We acquiesced, but requested repeatedly (right up until they boarded the plane) that they sign a waiver separating the tour company from the restaurants.” (The Cicalas held an event at Brigantessa promoting Antico, so Cratil Cretarola and Lee — who had no involvement with the planning stages of Antico’s first voyage — wanted to disassociate their names from the tour company.)

But Cicala says they didn’t sign, namely because they took issue with the fact that there was a section in the waiver that required the Cicalas to give up all of their intellectual property, “even family recipes and any recipes or dishes that we ever created at Le Virtù or at Brigantessa.” 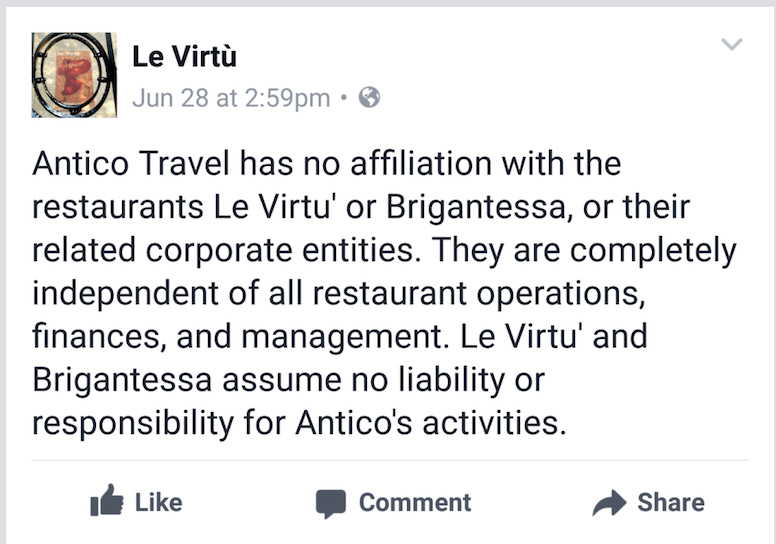 The question remains: Is Cicala still part-owner of Brigantessa? As of right now, yes. He tells Philly Mag, “I can go in there and make a pizza if I wanted to.” But Cratil Cretarola and Lee said otherwise in their statement: “Cathy and I are the majority partners of Brigantessa, and — along with Cathy’s mother — the only financial contributors to the restaurant, and the project was leveraged using Le Virtù. While certain formalities must be observed, Joe is out.”

“Completely false,” says Joe. “Our house is also collateralizing a third of the $400,000 loan. That’s our financial contribution.”

Cicala continues, “After consulting with our legal team, our lawyers insist that we still own a third of that restaurant, and there’s nothing that they can do about it, because we’re still collateralizing the loan, our name is on the liquor license, etc. But, yeah, this is going to be the legal battle here — how to dissolve the partnership of Brigantessa, but right this very moment, I’m not out.”

Cretarola ended with this: “We know the facts, we know the truth. We’re not frightened by any of those facts or truth. In the proper context, with a dispassionate arbiter, we can tell a story, and we have no fear of the outcome. They will try to argue this in the press and in public, and we no longer want to honor that, because when will it end? The answer is it won’t.”

In the meantime, the Cicalas will continue their trip in Italy. Per their statement: “We look forward to discovering more culinary hidden gems, deepen our knowledge of the cuisine and culture, and strengthen our relationships with farmers and chefs while we actively court investors for our own brick and mortar restaurant in Philadelphia. Interested parties may contact us through email.”