Brick And Mortar Is Over And Done

It closed without fanfare after a sputtering final week. 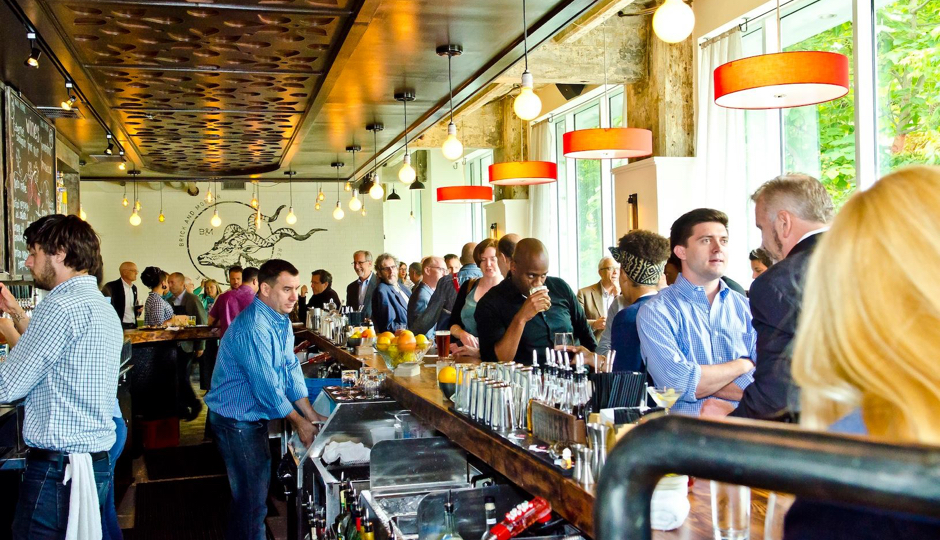 Brick and Mortar — the Callowhill gastropub that lasted two years at 315 North 12th Street, in the Goldtex Building — is gone. Owner Mike Welsh confirmed it for us about an hour ago, but staunchly refused to answer any questions as to why, exactly, the place went under. Wouldn’t even speculate. So for all we know, he ran over a witch with his car. Or was cursed by a genie. Or maybe the Goldtex Building was erected on an ancient Indian burial ground. We just don’t know.

Look, Brick And Mortar was a decent restaurant. It was never the best joint around, but it was far from the worst. They had a good cocktail program, did some interesting things with the beer list, were more than willing to adjust the concept when the neighbors (or changing tastes) demanded it. They added a brunch when everyone else was adding brunch, and basically pulled every trick a restaurant could — took every risk, jumped at every chance. They got into retail sales, courted the medical trade, and basically just hustled. They did so many events and special dinners it was sometimes hard to keep track. The crew there wanted very badly to be the perfect Philly neighborhood restaurant — this almost mythical, better-than-you-expect-it-to-be combination of local tavern, street corner bistro and chef-driven post-gastropub-gastropub. Brick And Mortar did everything it could to survive in this market.

And then it closed. All of a sudden. Know why? Because no one loved it.

There were some signs that the place was in trouble. A few days lately with the lights out and the doors locked (though they were still up and running as recently as July 26). A worrisome lack of press coverage in the last six months or so — basically since the appointment of a new exec chef to take over for opening chef Brian Ricci. And it’s just so easy to forget a restaurant these days — particularly a place that regularly fell just on the good side of mediocre.

What killed the place? We don’t know for sure (I’m still betting on that witch thing). But we can certainly guess. High rent, a challenging neighborhood, a concept that never completely came together. Any one of those things can end a restaurant in Philly these days. And all three together? That’s just the kiss of death. Because we’re in a place now with Philly’s food scene where that bright and hopeful gleam of newness buys you maybe three months of grace. After that, you’re on your own. And if you can’t win over the crowds, you’re done no matter how much you hustle, no matter how many services you add, no matter how many beer dinners you throw.

And that’s scary. Because there are a lot of restaurants in Philly that are in situations not a lot different than B&M, and plenty that I don’t think will last out a single year, let alone two. A lot of places operating on the ragged fringes of named neighborhoods, doing ok-but-not-great business, making small waves in a pond that has grown exponentially bigger with each passing year.

Brick And Mortar may be the most recent example of Philly’s scene recalibrating its tolerance for mediocrity, but trust me: It isn’t going to be the last. I see closures like Brick And Mortars as heralds of bad things coming. Culls and die-offs and the re-focusing of this city’s scant attention. Now maybe that’s because I’m just a depressing motherfucker who sees disaster everywhere he looks. But maybe not.

Until I hear a better story about what killed this place, I’m going to be wary. Because these things always start small.

Or maybe it really was that witch thing. Who knows.