Plus: He says he will close his insanely popular Girard Avenue joint in March. 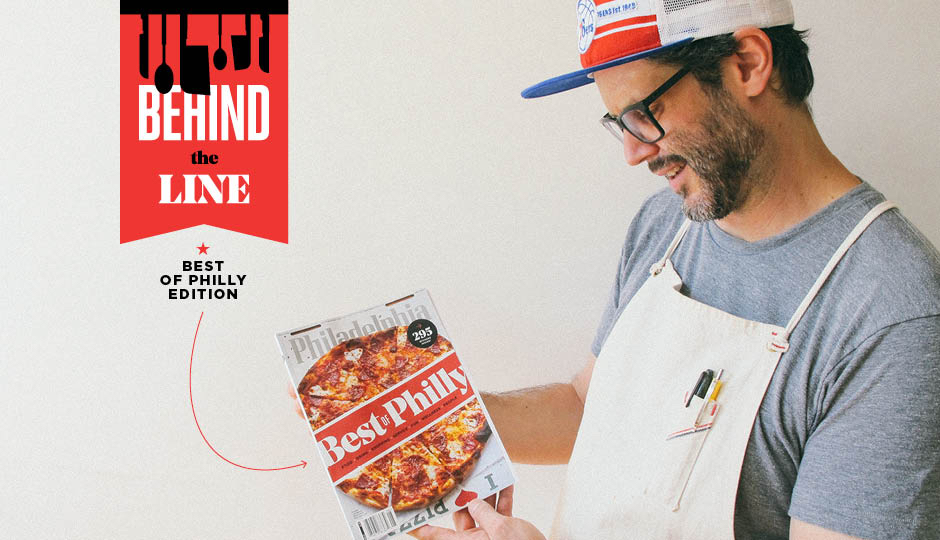 Joe Beddia with a copy of the new Best of Philly issue inside his Fishtown pizzeria.

Behind the Line is Foobooz’s weekly interview series with the people who make up Philadelphia’s dynamic bar and restaurant scene. Click the links to read the previous Behind the Line interviews with Marc Vetri and Michael Solomonov or click here for the full archive.

The 2017 edition of Best of Philly is now out, so we thought we’d pay a visit to the guy whose pizza graces the cover: Fishtown pizza guru Joe Beddia. We caught up with him on Thursday morning inside his perpetually sweltering Girard Avenue shop.

My full name is… Joseph Patrick Beddia. Technically, it’s pronounced BED-ee-ah, but everybody says “beh-DEE-ah.” It’s Sicilian. My dad was born in Sicily.

I grew up in… Lancaster. Then I brewed beer in Reading, and I also went to Penn State at a suburban campus.

My very first job was… as a groundskeeper at a hotel-resort in Lancaster. I hated it. Eventually, I went to work at the restaurant there, because that’s where all the girls were working. I basically set up a morning buffet. It was terrible. Everything was in the pans or whatever. That was the first time I ever met gay people. The chef was probably from prison. It was an old school kitchen environment. 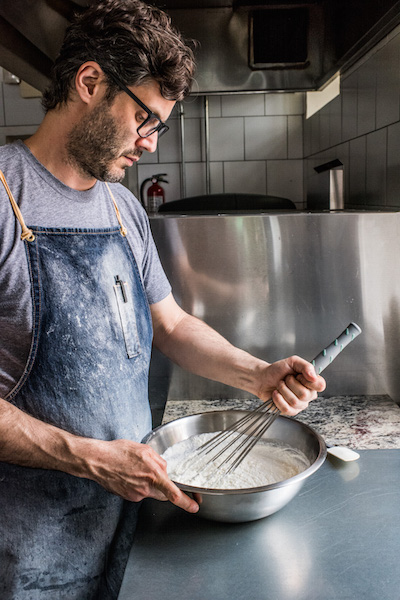 I learned to make pizza… at home. It started out as a hobby. And then I started going to New York and eating pizza and having pizza parties at my house. Then I did a stage at Osteria and then I went to Pizza Brutta in Madison, Wisconsin. And then, I got a job at Zavino when they first opened.

A pizza at my shop will cost you… $22 to $27, plus tax. That’s for a 16-inch pizza, approximately. Right now, the $27 pizza is a cream-based pizza with rainbow chard, garlic, basil and pesto. But really, this is a choose-your-own-adventure place. I always say the simpler the better. Like, two toppings. But you can get whatever you want. People always say I’m a pizza nazi, but I’m actually very accommodating.

Being a small business owner in Philly has been… pretty easy. I haven’t had a lot of issues with the city. It’s been friendly. The city wage tax isn’t great, but I’m also happy to be here.

My relationship status is… single. I wouldn’t say single and looking, because that will be a whole thing. Single with my fingers crossed. Single and not dating online. Single but hopeful.

My staff is… one guy: John Walker. That’s it. I don’t have anybody else. He helps prep, does the cash register, peels garlic.

If you’re coming to my house for dinner, I will cook… nothing. I don’t cook at my house. We’ll probably go to Kensington Quarters for pasta. If I do cook at home, it definitely won’t be pizza. When I was working as a brewer, people would ask me what I was brewing at home. I just did that for 50 hours this week! Last thing I want to do is make pizza. I rarely even eat pizza. It’s not that I’m too good for it. I just ate all the pizza.

When I saw that Philly Mag named me Best New Celebrity Chef, I thought… I don’t want to be famous. I want to be fucking rich. I’m not looking for celebrity. All that stuff… you sound like an asshole. Someone wants to come in with their camera in my face, I do get upset about that, because it’s rude. But if you ask if you can take a picture, I will probably say yes.

My usual workday looks like… an 8:30 wakeup. Then for six or seven years, I’ve been trying to get into Transcendental Meditation, so I meditate for 20 minutes. Then probably La Colombe for coffee. My house is right behind the La Colombe here in Fishtown. Then I start the dough, which means the dough for the next day, which I then let rest overnight. And then I take yesterday’s dough out of the refrigerator, weigh it, shape it. Then I’m making tomato sauce, slicing pepperoni by hand, and making sausage using pork that I get from Kensington Quarters.

The best part of being in Fishtown… is that I feel comfortable here. It’s familiar to me.

The worst part of being in Fishtown… is a lot of the bad new construction, whatever they call the bridge-and-tunnel crowd, obnoxious drunk crowds on the weekends, and the “Broverflow” at places like Johnny Brenda’s downstairs. I won’t even go there on the weekends anymore. It’s just insanity.

The restaurateur I respect the most around here is… Joey from Zeppoli. He really cares. He’s not looking for fame or anything. He works really hard. The care is tangible. His Palizzi thing, I love, and it’s great to see him on this side of the river.

The thing most people get wrong making pizza is… the dough. The dough is paramount. It’s 99 percent of what you’re eating. You need good flour — I use organic flour from Central Milling in Utah — and a nice slow fermentation.

The music I play in my shop… changes a lot. The first year, we listened to old country. Then I got into jazz for a while. Then the Grateful Dead. Now we’re listening to African stuff. The music is for me so I can have something that makes me happy while I’m working, and it may be loud. Whatever makes me happiest.

If you’re taking me out on your Philly Mag expense account… I want to go to Walnut Street Cafe. Great wine selection. We’ll drink a bottle of 2012 Clos Rougeard. I think it’s $195 there and $120 in the store. In the restaurant biz, that’s a good value. It’s pretty much an extinct wine.

I’m drinking more wine than beer these days… because beer doesn’t make me feel very good anymore. I need to watch my weight. I don’t exercise enough. And beer isn’t doing me any favors. The natural wine movement has been really interesting to me, and that’s kind of my next thing. I want to explore winemaking.

My next concept… will give me more balance in my life. This is going to be done in March. That will be five years. This is great and I’m happy to have done it, but in the future, this is not going to be an answer for me. The only way to do it is to train other people and do it on a larger scale, and that’s what I’m doing next. It will definitely be in Fishtown.

I’m approached about franchising… not very often. I don’t have any contact sort of information out there. No phone number. No email address. When you go to Momofuku, they don’t have a phone number. I bought a phone when I opened this and in the first two weeks, there was nobody to answer a phone, so I don’t use it.

Yelp is… something I don’t care about anymore. It was affecting me personally, because this venture is so personal. I know what we do here. I know how we treat people. I try to make the best pizza every time I make one. If someone has a problem, it’s probably the energy they brought in with them. It’s more on you than on me.

People who say my pizzas are too expensive… don’t care about the fact that I use organic flour and good pork and have to charge money for it. If that’s the way you feel, this is probably not for you.

My book that came out in April… was written from a home-cooking perspective. Certain big chefs have wood-fired ovens in the restaurants and then they write a book about how to make pizza. There’s a disconnect there. If you buy Thomas Keller’s Ad Hoc cookbook and buy a great chicken and follow his recipe, you’ll wind up with a great roast chicken. But if you buy a Roberta’s pizza book, you’re not going to wind up with a Roberta’s pizza in your home oven at 500 degrees.

One good pizza I had in Philly recently was at… Rione’s at 21st and Chestnut. It’s Roman style. To me, it’s perfect. Very light and airy. The pizza sits out on trays and you can get them to reheat it, but I would recommend eating it at room temperature. I don’t need hot pizza.

The temperature in my shop right now is… 88 degrees, and the air conditioner is on. Fortunately, it doesn’t get hotter than this, but it’s pretty much always like this.

My days off are… Sundays and Mondays, when we’re closed. When I’m off, I like to drink wine, eat, travel a bit. I like to sit at Whole Foods and drink wine and watch people grocery shop.

The most overrated pizza in Philly is… definitely Lorenzo’s. You have all these well-established places where the ingredients are just of the lowest quality. You’re never going to make a mushroom out of a can taste like anything other than a mushroom that came out of a can.

If you want a pizza quickly at my shop… get here early. Every day, people start waiting in line at 4:00 for when we open at 5:30. The pizzas come out every five minutes or so if you have 30 people in front of you in line… It’s like a monster.