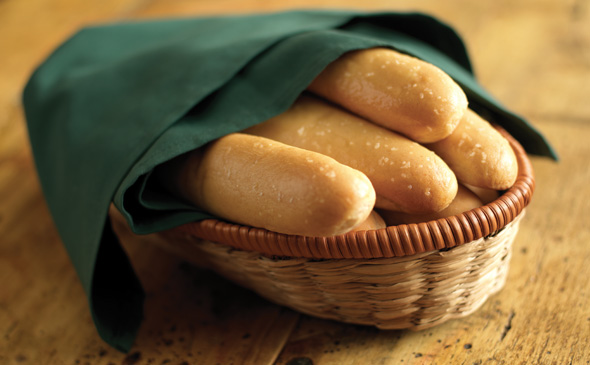 Here we are again. Another weekend done. Another Monday morning upon us. And if you’ve found yourself here, it’s probably because you want to see some sneakers made of sushi or know the truth about what Trump eats at the White House. Because that’s the news that really matters on a Monday morning.

But we’re going to start with something else this week. Today, we’re beginning with an important piece of investigative (Twitter) journalism: The truth behind what goes on at the Times Square Olive Garden.

New York magazine has the skinny on what goes on behind the scenes at the universe’s biggest Olive Garden — as told via Twitter, as a Q&A during a date between actual twitter employee Joe Wadlington and a dude who used to be GM at the Times Square OG. It is…amazing? Horrifying? Hilarious? I don’t know. It kinda depends on what sort of emotional baggage you bring with you to the story. But I can tell you that it does reveal what happens when the Olive Garden runs out of breadsticks (borderline civil unrest) and the story of a knife fight between two women during a dinner shift. Happy Monday everyone.

Last week, we told you about the caffeinated bagels at Einstein Bros. This week? Eater has a whole new way to abuse bagels: Bagel broth. No, really. It’s a consomme made from everything bagels. Plus, there’s a video to show you how to do it yourself.

It sometimes seems like Donald Trump makes an appearance in this column every week. And that’s (almost) true. But it’s not like I’m going out of my way to dig up Presidential food news. Rather, his eating habits have become like a key to his personality — a window into the mind of a man who demands that he gets two servings of ice cream when everyone else gets one and only eats pizza with the crusts cut off. Anyway, this week Vice has a piece (which is referencing a larger piece by TIME), in which they’ve revealed the President’s eating habits and culled an insider’s look at dining at the White House after-hours.

Also from Vice’s “Munchies” channel, a look into the shocking rise in ER admissions for “Avocado Hand.” Don’t know what that is? Then you should definitely check it out before you start prepping that avocado toast for your lunch.

Teen Vogue has the scoop on the newest crossing point of food and art: Sushi art sneakers. They’re created by Italian chef and artist Yujia Hu who shows his creations off on his Instagram feed. Teen Vogue talked with the artist and then curated some of his best work — including a sushi version of Hugh Jackman as Wolverine which is kind of completely awesome.

And finally this week, one of my former employers, Westword Newspaper in Denver, recently ran a piece called Five Cocktails Only A Dickhead Would Order. Inexplicably, that list included the Old Fashioned, the daiquiri and the dirty martini. It was followed by a response from barman (and occasional Westword contributor) Sean Kenyon who systematically takes the original piece apart and, in the process, drops a fair amount of nice bartender wisdom and ably defends his trade. Also, he makes it VERY clear that the Old Fashioned is a classic cocktail for a reason, and that any bartender who judges someone for ordering one should really find a different trade.