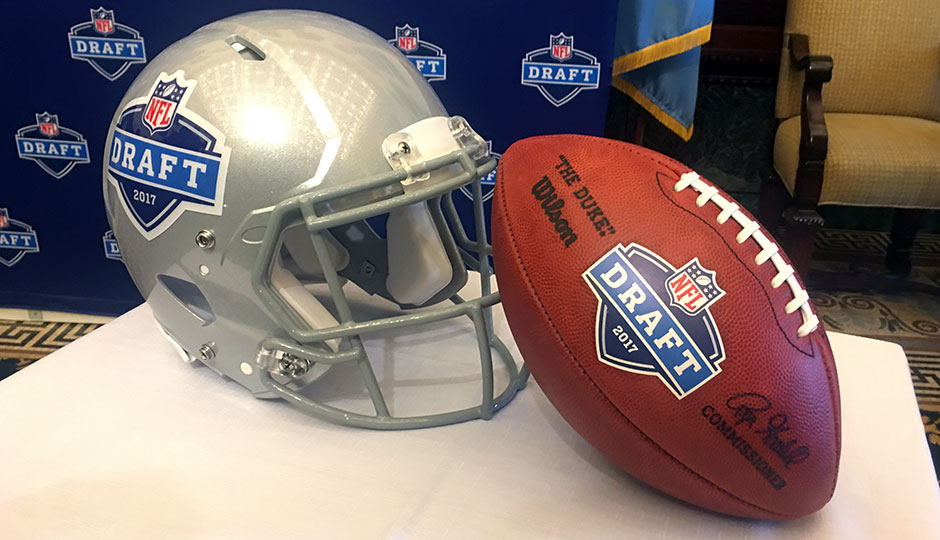 You’ve heard that the 2017 NFL draft is being held in Philly, right? You’ve heard that it’s going to be this massive, multi-day party on the Ben Franklin Parkway which will snarl traffic, close major streets, and keep tourists from running up the Rocky steps?

Okay, maybe you haven’t. I’m not exactly sure what kind of overlap there is in the Venn Diagram of super-dedicated football fans and Foobooz readers, but in case you’re one of those to whom this whole draft thing comes as a surprise, you can read all about it here. But if you did know it was coming and were thinking to yourself, “Hey, with this massive football festival in town for three days and 200,000 people expected to be in attendance, I wonder what kind of food they’re going to have?” then you have come to the right place. I talked to NFL spokesman Kamran Mumtaz yesterday, and he let me know about everything edible that’s being planned for the event.

The festival — which is being called the NFL Draft Experience — will run for three days, April 27 to 29, from noon to 11 p.m. on Thursday and Friday and 10 a.m. to 6 p.m. on Saturday. An absolutely massive number of people are expected to attend, and the part of the city that’s being closed down to accommodate them is roughly the size of 25 football fields. There’s going to be all kinds of football-y things going on to keep people occupied during those three days (interactive exhibits, games, autograph sessions, some kind of virtual reality experience and, you know, the actual draft), but all those fans? They’re gonna need to eat. And Mumtaz had this statement about what’s going to be available and how vendors are being chosen:

“At the NFL Draft Experience, our goal is to feature some of the best food Philadelphia has to offer. We are creating a diverse culinary selection, highlighting the cuisine for which the city is known. This includes menu items that local residents would be proud of being represented and that visitors want to try when they come to Philadelphia.”

And ok, that’s gonna mean a lot of cheesesteaks, sure. Because, you know, cheesesteaks. But to their credit, the folks from the NFL Draft Experience didn’t stop there. Granted, it’s not like Laurel or Royal Izakaya are going to be setting up shop on the Parkway, but if you’re looking to give someone a stand-up taste of Philly, offering them a dripping Schmitter and some crab fries from Chickie’s & Pete’s while surrounded by tens of thousands of sweaty football fans all arguing about the Eagles and complaining about the PPA is a pretty accurate experience.

As of right now, the actual list of vendors is still evolving. There’s an application process, and according to Mumtaz, some of those applications are still being, you know, processed. But as of yesterday, here’s how the list stands:

Fried cheese curds, crab fries and water ice? Check. Soft pretzels? Check and double-check. Garces Fish tacos, grilled cheese sandwiches and Korean fusion? Yup. Cheesesteaks? Multiple checks (plus some Nick’s roast beef for those who want something a bit, I don’t know, racier). Plus you’ve got DiBruno’s for something a little bit classy, Antney’s for something a lotta bit South Philly, a Schmitter without having to drive all the way out to McNally’s and like nine different varieties of street BBQ.

It’s not the hands-down greatest list of vendors I’ve ever seen in one place, but honestly? It ain’t bad at all. After six hours wandering around in a football haze, I’d be thrilled to see something like Meltkraft or Village Whiskey on the horizon. And while I’m not saying that it’s worth braving the lines, the inevitable security, the parking hassles and everything else just to get a Joe’s cheesesteak and some fried cheese, if you’re legitimately psyched about going to the NFL Draft Experience anyway, at least you know you’ll probably be well fed while you’re there.

As for me? As I do whenever some big-ass event like this descends on the city, I’ll be using the concurrent lack of traffic everywhere that the event is not happening to eat at all those places where 200,000 sun-stroked football fans aren’t.