You'll be sure to find Hellmann's at his new cheesesteak shop. 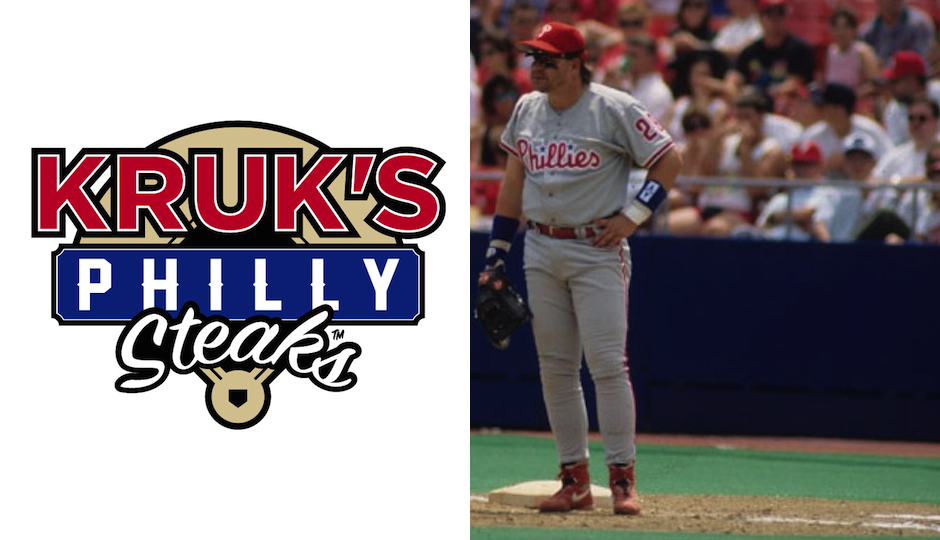 Left: The logo for Kruk’s Philly Steaks. Right: Kruk with the Phillies in 1992. (Photo via Missouri State Archives/Wikimedia Commons)

Former Phillies star John Kruk is a man full of surprises. Even though he built a real tough guy reputation while playing for the Phils, Kruk has never been on a motorcycle, he refuses to get a tattoo, and his preferred drink these days is water. And now we’ve learned that Kruk eats his cheesesteaks with mayonnaise, an admission that might have some hardcore cheesesteak purists crying foul.

Kruk, who recently announced that he’s joining the Comcast SportsNet Phillies broadcast booth, is opening his own cheesesteak shop in Naples, Florida, where he’s lived with his family for the last eight years.

Kruk’s Steak Shop is scheduled to open in late February, Kruk told us.

“We’ve been doing a lot of taste testing,” he says. “I probably had three or four cheesesteaks just the other day. My favorite is with American cheese, grilled onions, ketchup and mayo. I love a ketchup and mayo mix.”

You’re a legend, John, but mayo?

“Yeah, I’ve had people question me about the mayo part,” he explains. “Remember, though. I’m not from Philly.”

Pat’s King of Steaks owner Frank Olivieri says Philly shouldn’t be too hard on Kruk for his questionable taste in cheesesteak condiments.

“I’m not completely opposed to it,” offers Olivieri. “But not on a Philly-style cheesesteak. For me, mayo seems to find a better home on a cheesesteak made in South Jersey, like at the White House or Dino’s or Sack O’ Subs. Something about the bread in New Jersey is a better vehicle for the mayonnaise. Although it’s really a South Jersey thing, we do have little packets of mayo at the store for those weary travelers from South Jersey who just can’t do without it.”

And, as fate would have it, Kruk lived in Mount Laurel for years while he was involved with the team.

At Kruk’s Steak Shop, you’ll be able to build your own sandwich or choose from a specialty sandwich menu that includes plenty of Phillies nostalgia: The Krukker is Kruk’s own mayo version; Mitch Williams gets a nod with The Wild Thing (chicken steak, buffalo sauce, and American cheese or blue cheese ranch dressing); Darren Daulton is channeled in The Dutch (roast pork, sharp provolone and broccoli rabe); or, if you prefer long hots over the broccoli rabe, order a Chooch.

“We already have a bunch of Primo’s Hoagies down here,” says Kruk, referring to himself and his partners. “We bought a majority of the Florida territory to open Primo’s Hoagies. And the steak shop is my next step.”

Of course, the one really important question is this: Where is he going to get his bread? We all know that you can’t get real bread in Florida.

“I can promise you that it will come from a Philadelphia bakery,” insists Kruk. “But I can’t tell you which one yet. We’re still finalizing everything and testing things out. We have tried every cheesesteak place in Philly.”