Yet another knockout dessert by the Queen Village cafe. 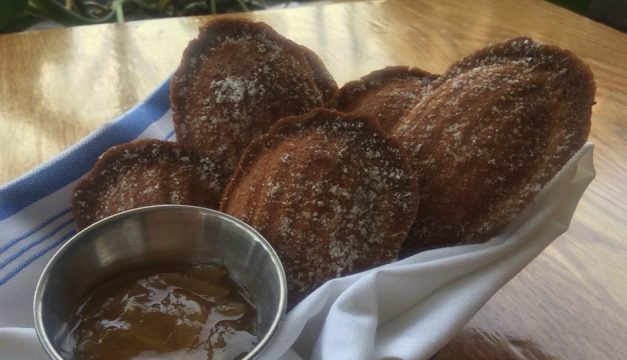 Look for the nipple. That’s the secret to a great madeleine — the nipple, or téton as the French would say. It’s the bump on the backside of the shell-shaped dessert native to the town of Commercy in the Lorraine region; the bigger the nipple, the fluffier the cake.

By now, you probably know the Hungry Pigeon origin story, but here’s a recap: two chefs, friends for many years, decide to open an all-day cafe together in Queen Village. Pat O’Malley, the pastry-half, returned to Philly after running one of the New York City’s most revered bakeries, Balthazar’s. He reunited with Scott Schroeder, and together they opened an easy, breezy locavore restaurant on the corner of 4th and Fitzwater Streets. Where Schroeder succeeds in bringing to the table simple and ingredient-driven pleasures like McMuffin-like breakfast sandwiches, pigeon pot pies and braised chicken taco dinners, O’Malley’s been able to catch critics’ eyes with glistening croissants and gooey banana bread sticky buns.

The madeleines are new; O’Malley found a vintage mold and decided to bake a few. Now they’re available (for the time being) as an after-dinner treat. They’re baked to-order, so treat them as you would a soufflé (there’s a small wait). When they arrive, they’ll be warm, slightly crispy on the outside, fluffy in the middle, freckled with powdered sugar. On the side, a Meyer lemon marmalade for spreading, or dipping, or, you know, spooning directly into your mouth.

They’re $8 for a plate of six, available only during dinnertime.