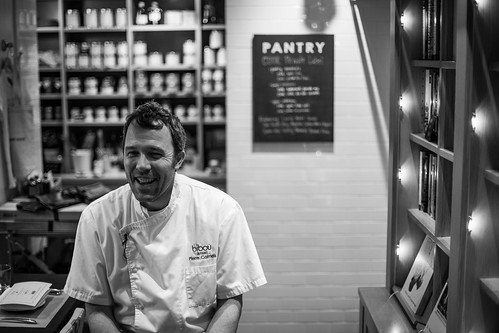 Charlotte and Pierre Calmels of Bibou are ready for their next venture. The couple who run one of Philadelphia’s most praised BYOBs are heading to Rittenhouse Square and the Rittenhouse Tavern space in the Art Alliance building. Michael Klein reports that couple are turning Rittenhouse Tavern into a classic French restaurant with a liquor license and at a price point lower than Bibou.

No name is set but they’re hoping for an October opening. Restaurants have struggled at the Art Alliance despite its location, attractive interior and tranquil outdoor garden. But the Calmelses have made a name for themselves at Bibou and the restaurant is one of just five restaurants that have received Craig LaBan’s four-bell rating. Before opening Bibou, Pierre Calmels was Georges Perrier’s chef de cuisine at Le Bec Fin for six years.