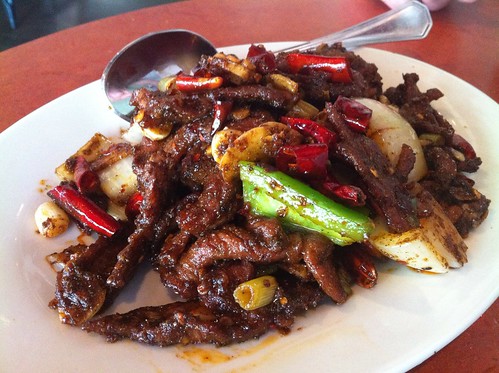 Remember all that nonsense a few years back about water sommeliers? How there were thousands of brands of bottled water out there, and pretty soon the world’s Michelin-steered gourmets would be perusing water menus to slake their thirst?

I know what you’re thinking: turns out the Great Recession had an upside, after all.

Anyway, I thought I’d forgotten about those H2O evangelists (and their unlikely apologists) for good—until a clear sip from a cold glass at the new Han Dynasty brought the memory gushing forth.

Now, I should say that I’ve got nothing against people savoring water the way they savor wine. I’m not personally about to veer away from tap, but hey, whatever floats your boat. Further, I’ll freely concede that water from different places has different qualities. I have a friend in Bangladesh who can’t resist drinking the water from certain wells in the countryside around Dhaka—even though he knows they’re contaminated with arsenic. He just loves the taste, and figures that an occasional pleasure isn’t going to give him kidney cancer. Which sounds reasonable enough to me, even if that water didn’t spellbind my taste buds the way it did his.

But here’s one thing I can say with absolute certitude: you could taste every bottled water on earth and never come close to the sensation I had at Han Dynasty. It was tap—just Philly’s finest, nothing more—but that’s not what it felt like when it splashed over my tongue in the wake of the chili-oil-drenched cold beef and tripe and a spoonful of pickled vegetable and pork soup. No, something about that particular one-two punch—the chilled conflagration of tripe ribbons and the sour balm of the soup—contorted my sensory apparatus in a way that only became fully clear when I chased it with water.

I’m not even sure how to describe it. It tasted metallic and tingly and acidic, and for a split second as sweet as aspartame—but for such a fractional split that I was sure I had to be wrong, even though it kept happening each time. It was like water that had been electrocuted and weird ions were lingering after the voltage had gone out. There’s a considerable possibility that I discovered the Higgs boson in there—right on the tip of my tongue.

Well, maybe no one. But I’m going to go out on a limb and say that if anybody experienced this tongue trickery courtesy of Wylie Dufresne, or Mugaritz, or any other flag-waver of the culinary avant-garde, people would be lining up for triple-digit tasting menus to get in on the rapture. And one of the beautiful things about Han Dynasty is that it contains such unexpected and tongue-twisting phenomena with none of that pretense and hardly any of the expense.

Devotees of Han Chiang’s Old City Sichuan restaurant know this already, of course. But they should be pleased to learn another beautiful thing about Han Dynasty, which is (as I discovered in recent meals in West Philly) that the formula takes well to cloning.
Chiang’s new branch near the soulless intersection of Market and 38th streets has enlivened that awkward location in a way that Daniel Stern’s Mid Atlantic never quite managed. The lunch and dinner hours buzz with energy amid the eclectic décor of rustic wood planks and bundled florescent tubes. Blue-shirted nine-to-fivers slurp down hot-and-numbing bowls of splendidly balanced dan dan noodles, Asian grad students nimbly chopstick ice cubes into cups of green tea while Chinese family hoedowns cheer the arrival of platters mounded with whole crabs in spice paste. It’s a happening place even when it’s too early in the day to partake of bartending guru Katie Loeb’s harmoniously layered Scorpion Bowls—whose resurrection as a drink that doesn’t smack of high-fructose corn syrup is most welcome.

The secret to Han Dynasty’s success in Old City has always been Chiang’s canny blend of full-bore spicing (in the true Sichuan style) and ingredients that (perhaps a little less authentically) are entirely familiar—no sea cucumbers, pork kidney, or jellyfish here. In a phrase, he figured out how to get Philadelphians hot but not completely bothered.

And the West Philly location attempts to replicate that; indeed the menu is identical. Judging from two small lunches (though there is really no such thing as “small” here) and a sprawling dinner, it’s working—with just a few little wrinkles.

Some of those are welcome. The space itself is heaps better than the Old City location, both inside and out on the stone patio. And the hosts and servers at Han West are far more polished and engaging than any I ever had in Old City.

But that second thing cuts two ways. The problem in Old City was always that if Chiang himself presided over your meal—with all his fabulous profanity (“Fuck you, Dirk,” he once said, after asking permission to curse, to one of my dinner companions, who was then obliged to inform Chiang that his name was, in fact, Kirk), and his opinionated meddling (on the same occasion, he wrote down our order only to insist on striking an entrée from it in favor of a vegetable, “because you have too much meat.” When I asked him his favorite, he replied, “I don’t like vegetables.” Since they were good for our sex life, however, he brought us pea greens which were—since we’re already using the restaurant’s vernacular—fucking delicious) you could count on him to orchestrate an unforgettable feast—both because of his impish sense of humor and his rare knack for retooling your order into a meal that truly cohered into something finer than the sum of its parts. But if you drew any other waiter, you were basically of on your own. At Han West, though, you can count on personable service and reliable descriptions—but with Chiang off minding other parts of his empire there’s no one who can take charge of your meal in his inimitable way.

With a couple exceptions, I was pleasantly surprised by the cooking at Han West. On many dishes the new kitchen hit the same highs I’ve come to expect. The dan dan noodles struck the perfect relationship between numbing Sichuan peppercorns, spicy chilies, and voluptuous sesame paste—every bit as good as my first unforgettable bowl in Old City. Ditto the soothing cold sesame noodles, and the cumin lamb, which was aggressively spiced and surpassingly tender. Dry-fried pork teeming with bamboo shoots and Sichuan chilis was also on the same level.

But a couple dishes didn’t quite resurrect the Old City magic (which, to be fair, is built on some of the best cooking in the city, for any sort of cuisine). That cold beef and tripe had the same haunting funkiness I remembered, but not the sesame seeds and peanut shards that made my original encounter so multidimensional. Three-cup chicken (named after the troika of soy sauce, sesame oil and rice wine) featured intolerably fatty chunks of chicken. A giant bowl of flounder layered with soft tofu, whose spice level the menu pegged at the top of its 10-point scale, had an oddly muted flavor and an alkaline mouthfeel (which may have been intentional, in which case I suppose my failure to enjoy anything beyond the silken texture of the tofu is my own shortcoming).

Nevertheless, I could eat dan dan noodles here three times a week and get pretty close to Nirvana. Only, now that more of my big dinner comes back to me, I would need to add the occasional bowl of sweet and sour chicken and mushrooms, whose sauce—all mellow finesse—engulfs crispy rice cakes. Oh, and crispy spicy cucumbers. How could I possibly come without ordering that alchemical amalgam of sweet coolness and heat? And who knows what crazy sensation will be the next to wallop my tongue after that tap-water sorcery?
Plainly, I will have to go back and find out. And what a boon to have a Han Dynasty within walking distance, at last.