Around the Web: Doughnuts Edition 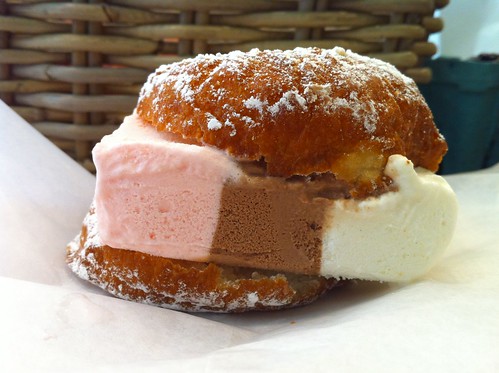 We’ve had Meal Ticket’s post on Frangelli’s ice cream doughnut sitting in our RSS reader for a couple of weeks now. But today we finally clicked on it and holy crap, it’s an ice cream dougnut! Not sure what else we thought it would be but wow, are we enthralled.

Table Matters’ Meg Favreau hops on her bike and pedals around to see if any of Philadelphia’s doughnut spots match up to what she tasted in Los Angeles. What she finds is a mixed bag and some true crazies. Among the tested:

Fries with that Shake knows doughnuts too and for her birthday she enjoys a couple at Frangelli’s.

Some of doughnut we love and an ice cream that intrigues: