The team’s fortunes looked bleakest in Las Vegas. Then the flowers started to bloom. 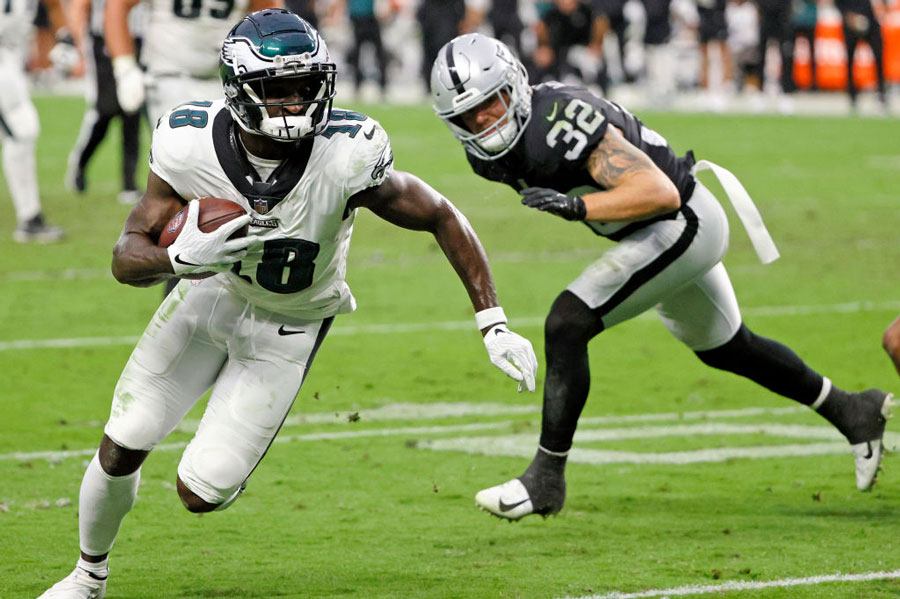 Jalen Reagor scores on a 17-yard touchdown pass past defensive back Dallin Leavitt of the Las Vegas Raiders during their game at Allegiant Stadium on October 24, 2021. / Photograph by Ethan Miller / Staff via Getty Images

The Eagles were almost a cliché, just another example of a tortured soul hitting rock bottom on the Las Vegas Strip.

When Philadelphia lost to the Raiders, 33-22, on Oct. 24th, all hope looked lost, and the Eagles seemed like they were far closer to being one of the worst teams in the NFL rather than one of the best.

As Nick Sirianni walked off the field at Allegiant Stadium, dodging a discarded jersey from a disgruntled fan, his team had dropped five of six games, and many of the setbacks weren’t even all that competitive.

Then came the flower talk, maybe the worst sin of them all in a city that regards itself as tough above all else.

Just like Tom Hanks as Jimmy Dugan said “there is no crying in baseball” in A League of Their Own, there are no flowers in football, not in Philly.

One-and-done talk started to pop up when it came to Sirianni among the uneducated who didn’t understand things really were growing “under the soil” just as the softer part of the schedule was on the horizon.

Since the infamous flower talk, which actually went over like gangbusters with the players according to multiple team sources, the Eagles are 7-2 and actually clinched a postseason berth one week early.

“I just think you can’t flinch, and I don’t think we flinched, not one bit,” quarterback Jalen Hurts said. “We never flinched as a football team regardless of any expectations of anybody else or any opinion out there. We didn’t flinch. We controlled the things we could, we approached every day with the right approach and just continued to attack.”

Overcoming the adversity has also created a tight-knit feeling in the locker room.

“It’s such a special feeling when you’ve bought into the system, the process that your head coach and your coaches are implementing,” left tackle Jordan Mailata said. “And so for us, when we look back at that 2-5 start, we knew we were going to go somewhere. We knew the weapons we had on our team. We understood the process.”

Process can be a dirty word in Philadelphia thanks to the hijacking of the term by the 76ers to better brand a tanking philosophy. The Eagles, though, are trying to take it back.

“Trusting the process was that next step that we had to take, and once we started trusting in the process and listening to the coaches and going through the details and making sure that we weren’t repeat offenders and making the same mistakes over and over again and holding each other accountable, that’s when the ball started rolling,” Mailata explained.

Through it all Sirianni was the steady hand on the rudder.

“The thing that coach Sirianni has done so well has been keeping the messages the same,” middle linebacker T.J. Edwards said. “There’s never been a panic. Even when we were down at our worst, there’s never been a time where anyone’s freaking out. Obviously, after a loss there’s a lot of disappointment and people are frustrated with how we’re playing and things like that, but our process has stayed the same throughout this entire time, whether we’re winning or losing.”

Rookie coaches who get off to poor starts typically do not recover, as evidenced by the fact that Sirianni is just the second freshman mentor to lead an NFL team to the postseason after such an inauspicious start, sparking some Coach of the Year buzz.

Sirianni tries to remain insulated from all the talk even when it was at its most negative.

“I don’t look too much into that,” the coach claimed. “Again, I try not to hear the outside noise. I know sometimes, you’re going to hear it because, obviously, that’s part of my job, is to do the media multiple times in a week. You’re naturally going to hear some of that stuff.

“… But everyone has a job to do, and when we were not playing good, there was criticism. When we’re playing good, you get praise. I think when it’s the quarterback and the head coach, they get – I think when you’re winning, you probably get more praise than you deserve, and when you’re losing, you’re getting more criticism than you deserve. … My job is to block all that out and focus on the task at hand.”