Nick Sirianni Needs to Double Down on Being Himself

The Eagles’ rookie coach was the butt of more than a few jokes Wednesday for comparing his struggling team to a growing flower. 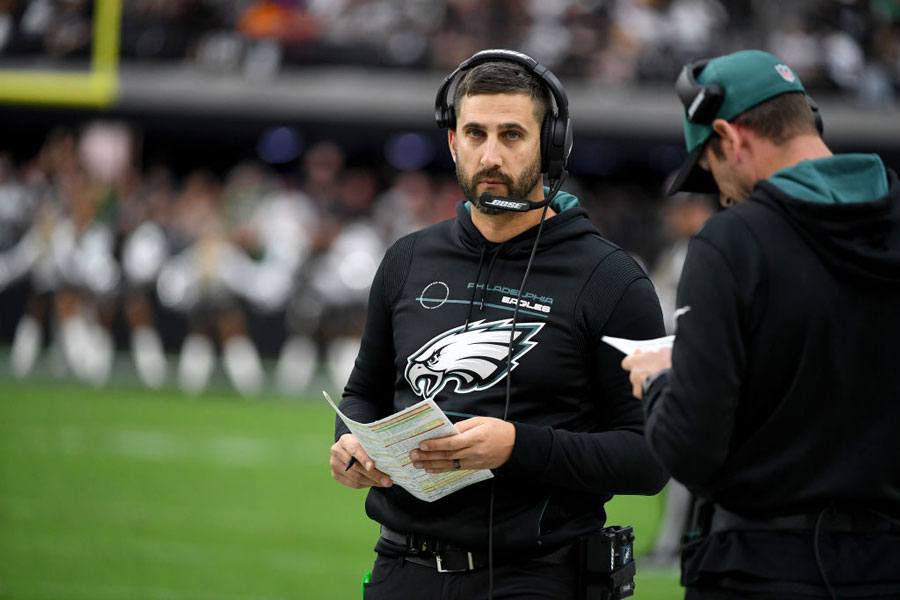 Nick Sirianni during the game against the Las Vegas Raiders at Allegiant Stadium on October 24th. / Photograph by Sam Morris / Stringer via Getty Images

This is a city where the head coach of the Eagles once compared opponents to home invaders trying to violate his own players’ families, so you can imagine how the current mentor’s analogy tying his struggling football team to a soon-to-be budding flower went over on social media.

Football coaches are supposed to be tough guys teaching tougher guys, not amateur botanists well-versed in daffodils, but there was Nick Sirianni discussing his latest motivational message designed to keep a struggling 2-5 team on the right path.

“Like there’s got to be a message that I have to keep everybody together and keep everybody sticking to what we really want to do,” the coach explained before launching into an explanation that generated hundreds of local memes from the very same fans who are somehow shocked that a first-time head coach might have some growing pains and that a second-year quarterback who struggled with accuracy and decision-making is struggling with accuracy and decision-making in his first go-round as a bonafide NFL starter.

We had baseball analogies with Jim Schwartz. Now we’re on to botanists. #Eagles pic.twitter.com/yj8U6iKAvo

The thought was actually a pretty solid juxtaposition, yet somehow showing a flower is tantamount to incompetency, while Ray Rhodes’ missive about sodomy back in 1996 is more appropriate for football players?

Who knows? Maybe one or two of the Eagles actually likes working in the garden.

One or two certainly like the messaging, perhaps a surprise for those who conflate Fletcher Cox’s personal unhappiness with the defensive scheme into a team-wide mutiny.

“I thought we had a great meeting today,” tight end Dallas Goedert said. “Sirianni was really passionate, talking to the team, giving the message that we all needed to hear. Like I said in the [Raiders] postgame press conference, we’re close. He just hit on that. We’re really growing in the building. Our record might not show that, but like I said in the past, we’re close. He believes that. As a team, I think we believe that. We just gotta keep trusting in the process and go out there and continue to get better each and every day. Once we start rolling, we’re going to be rolling.”

Jordan Mailata was also on board.

“I think Coach Nick Sirianni came in very passionate today,” the left tackle said. “I think throughout the whole team they kind of understood his message of just the daily deposits. You could tell we needed that. And he showed it through just his raw emotion when he was telling us about that plan and the flower.

“I think it was well-received between, I guess, every single player on the team sitting there. Daily deposits, the rent is always due, those kinds of things that we say. And I think just focusing on the process, doubling down on what we know, how to practice the fundamentals and just the daily process.”

The more important part to all of this is Sirianni connecting with his players, not the players from a generation ago or not those watching who want Andrew Sendejo-trademarked “Make Football Violent Again” hats on their early holiday gift lists.

From there it’s about turning everything into wins on the football field.

Whether the coach can do that remains to be seen, but the last thing any fan should want is a daily dose of coach speak that’s offered up by Sirianni’s top offensive aid, offensive coordinator Shand Steichen, during his weekly pressers.

Sirianni certainly needs to improve his offense and his game-management skills. What he doesn’t need to do is be something he’s not. In many ways, he got his job because people like Jeffrey Lurie gravitate toward his almost folksy authenticity.

Maybe those roots are taking hold.