The Eagles’ veteran defensive end has to help the team in different ways now that he’s lost for the 2021 season. 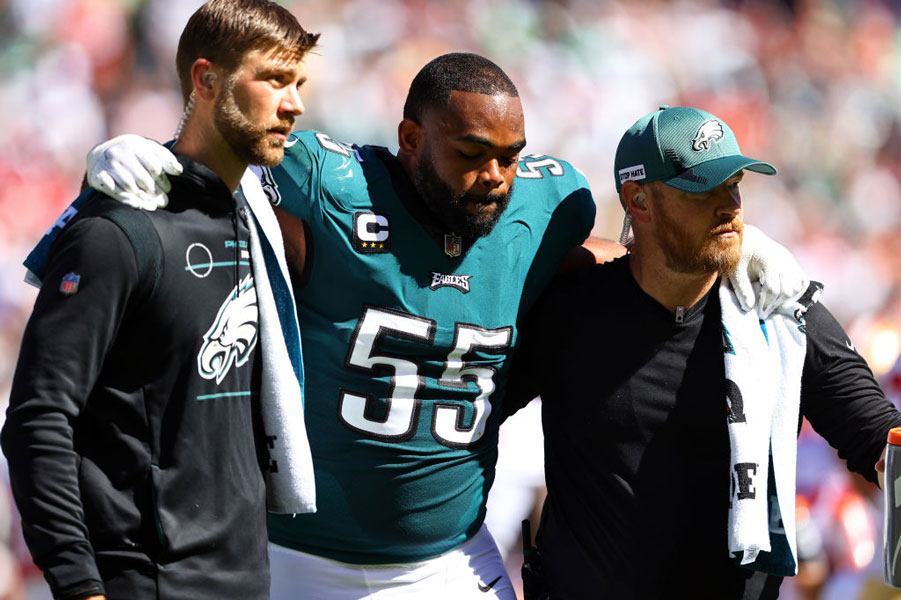 Brandon Graham is helped off the field during the first half against the San Francisco 49ers at Lincoln Financial Field on September 19, 2021. / Photograph by Mitchell Leff / Stringer via Getty Images

A positive attitude has worked well for Brandon Graham so far.

The ever-effusive Graham, 33, is the longest-tenured current Eagles player. But his 12th season was cut short by a ruptured Achilles’ tendon suffered in a 17-11 loss to San Francisco.

Despite the injury, Graham showed up on crutches last Monday night in South Philadelphia for his weekly radio show on 94 WIP — a clear example of why Nick Sirianni called him “the heart and soul” of the team earlier in the day.

“When I got hurt, I said a prayer, and I was just like, ‘Let’s go,’” Graham told NBC Sports Philadelphia’s John Clark. “I tried to have the best attitude I could have. Of course, I was hurt this morning when it kind of set in, but I ain’t stay there long. I’m just going to enjoy it from the sideline. But I’m still going to be there. I’m going to give everything I got. The intensity is still going to be there.”

Brandon Graham what an attitude

“I was hurt this morning when it set in a little bit… No sense in crying over it. I’m going to work my butt off to get back while I’m working my butt off to help the team” pic.twitter.com/H8bXzpdXSr

Graham has been through it all in Philadelphia since arriving as the 13th overall pick in the 2010 draft. Once described as a bust, he slowly developed into one of the NFL’s better edge players and the architect of the most important play in modern franchise history: his strip-sack of Tom Brady in Super Bowl LII that put the punctuation on the Eagles’ first and only Lombardi Trophy.

He’s not the Liberty Bell or your favorite cheesesteak spot, but he is the closest thing Philadelphia sports has to comfort food, an indelible bright spot in the culture of the city’s passionate fans.

“Obviously, we’re going to miss the heck out of B.G. He is the heart and soul of this team,” Sirianni said. “Look forward for guys stepping up, different guys leading, just a continued role for [DT] Fletcher Cox to lead. I think he’s a great leader. He’s been sharing that with B.G.; now, he gets to take over on the field to run that defense and help run that defense.

“So look forward to everybody that gets an opportunity to step up in the absence of Brandon Graham. But we’ll definitely miss Brandon, and he’ll be missed throughout the entire building.”

Someday, Graham will be honored by the Eagles as a member of their Hall of Fame.

His injury affected those who’ve been around him over the years, some for close to the decade. “B.G. has been my locker mate since I got here, and now, we still get to laugh and talk about things,” an emotional Cox said. “It’s just he won’t be on the field on Sundays; it’ll be in the locker room. So I’m looking forward to that and making sure he stays in a good place.”

“It’s terrible,” Pro Bowl right tackle Lane Johnson added. “He’s probably one of the greatest humans that I’ve had the pleasure of playing with and competing with for eight, going on nine years. He’s really the heartbeat of this team by the way that he conducts himself, the way that he leads, and the way that he plays. … I’m heartbroken for him.”

Graham’s impact on the team wasn’t lost among the younger players, either. “That is huge,” linebacker Alex Singleton said of Graham’s injury and upcoming absence. “That emotional leader. You guys all know him. He always has a smile on his face and is always doing the right things. He is always one of those guys that could always overlook somebody. I remember when I was still on the practice squad and he was the guy every day telling me I would play someday. He is that guy for this team, and he’ll still be that guy. That’s the best part about him — that we might lose him on the field, but we won’t lose him in the room and in the building.”

Sirianni’s first core value as a coach is “connecting” with everyone, from his players and coaches to the fans — something that’s second nature for Graham.

While Kelly and former quarterback Carson Wentz often wouldn’t make eye contact with media members outside a press-conference setting, Graham stood at the exit of the NovaCare Complex after the 2018 season to give every reporter a bro hug and a goodbye when he thought the Eagles might not bring him back as free agency loomed.

By the 2022 season, Graham will be an expensive 34-year-old coming off surgery for a serious injury — a potential death knell in a young man’s sport.

“No sense in crying over it. Might as well just get ready for what’s to come,” Graham said. “I’m going to work my butt off to get back.”