The Pennsylvania state senator got thousands and thousands of retweets when he called President Trump a “shit-gibbon.” Politics in 2017. 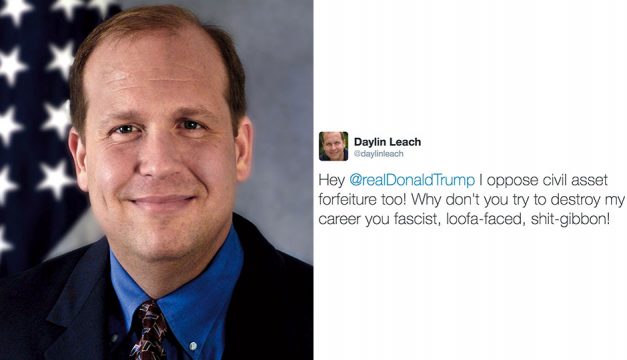 Daylin Leach has been making jokes on the Internet about as long as I have.

Okay, maybe he wasn’t posting image macros in AOL chatrooms in the 1990s. But it was 2005 when Leach, then a member of the Pennsylvania House of Representatives, amused (and annoyed) readers with his personal blog. He even feuded with the the guy who wrote Marley & Me (and the Inquirer as a whole) over the blog, which he took down after the kerfuffle.

“This has been a learning experience for me — I have a much better understanding that, while I believe comedy is for all people, not all comedy is for every person,” Leach said when shutting down the blog.

But thanks to Twitter, everyone literally is now a comedian. And so Daylin Leach is back at it again on his Twitter account, where he tweets with abandon, clashes with critics, and dishes out sarcasm: “But its fair, because both rich and poor alike are free to donate $6,000,000 to federal candidates each cycle.” (His Twitter bio says he’s “Frequently mistaken for Brad Pitt” … hey, that’s my bit!)

A tweet he made earlier this week, however, caused more of an uproar than anything he’d tweeted or posted on LeachVent.com before.

Hey @realDonaldTrump I oppose civil asset forfeiture too! Why don't you try to destroy my career you fascist, loofa-faced, shit-gibbon!

Here’s what happened. On Tuesday, Donald Trump met with county sheriffs from around the country. While there, they discussed civil forfeiture — a legal maneuver in which the government confiscates peoples’ property and sues in order to keep it. It’s rife with abuse, and some lawmakers have made efforts to curtail the practice.

One such lawmaker, still unnamed, is in Texas. Though it was very clear from the conversation that Trump literally had no idea what civil forfeiture is, he did say he’d try to “destroy” a lawmaker who was attempting to push back against civil forfeiture.

This led to Leach’s tweet: “Hey @realDonaldTrump I oppose civil asset forfeiture too! Why don’t you try to destroy my career you fascist, loofa-faced, shit-gibbon!”

Leach has tweeted plenty of jokes before, but none took off like this one. He told the Inquirer he had calls from as far as London, and that one man even called up to send him a bunch of shirts with “shitgibbon” on it.

Philly.com surmises the term “shit-gibbon” came from a tweet a person in Scotland sent to Trump after Trump praised the Brexit vote. (Scotland voted against exiting the EU.) Leach told the Inky he didn’t come up with the term but filed it away for later use when he heard it.

It all worked out, of course, as he’s now received 14,000 retweets and 32,000 likes for his Trump tweet. Why did it go so viral? It was funny, of course. “Loofa-faced shit-gibbon” is pretty funny. And those not familiar with Leach’s history online must’ve been startled to see an actual elected official call the president of the United States a shit-gibbon.

Leach isn’t the only local pol to attract a viral following due to Trump. Sen. Bob Casey — once so bland and unknown nationally that one line in a song about him is “he loves to say the Pledge of Allegiance” — now racks up thousands of retweets every time he comes out against President Trump.

We’re less than a month into the Trump presidency, but one thing is already ringing true: If you’re a politician who goes after Donald Trump, you’ll get an instant following online. If you do it with a little vulgarity, you can get 10,000-plus retweets. The first pol to start making funny photoshops of the groper-in-chief might become our next president.