Agriculture K9s — all beagles — work at PHL Airport, but they're not sniffing for bombs or drugs. They're using their noses — and big, puppy-dog eyes — to protect America's food supply. If you step off the plane at PHL after a long international flight this holiday season, there’ll be someone there waiting for you when you walk into baggage claim: An adorable, cuddly beagle.

While you’re waiting for your luggage, as many as three of these little guys could be wandering around baggage claim looking impossibly cute. But these dogs are not here to cheer you up after a weary trip. The beagles are working. They’re sniffing your luggage to see if you brought any food from overseas.

The beagles at PHL are part of Customs and Border Protection. They’re agriculture K9s. While other dogs hunt for explosives and drugs, the beagles at baggage claim are only trained to sniff out food. Travelers coming in from foreign countries are banned from bringing many foods into the U.S. Those who have food must declare it to a CBP officer.

But this isn’t some bureaucratic measure to boost airport concessions; it’s done to protect the U.S. food supply. “We found Khapra beetles coming in on a flight from Doha,” says U.S. Customs and Border Protection public affairs officer Steve Sapp. “It’s one of the most destructive insects in the world.” The Khapra beetle feeds on grain stores, which means it could be devastating to food supplies.

But most of the travelers sniffed out by three beagles Philadelphia magazine observed earlier this month weren’t carrying anything that destructive. Instead, the three K9 dogs — Auburn, Maddie and Yoshi — found mostly fruit (apples, bananas, oranges) buried at the bottom of incoming travelers’ bags. 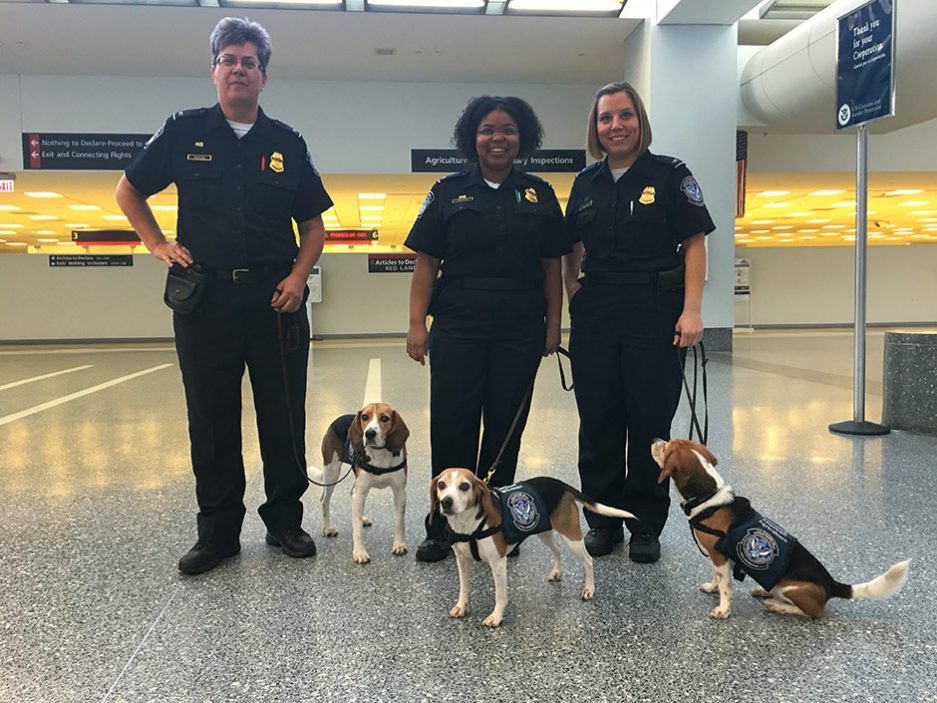 Agriculture K9s and Their Handlers

From left: Mary Yasson and dog Yoshi, Sharon Taylor and dog Mattie, Melissa Wallace and dog Auburn (who did not cooperate with the camera for this shot). 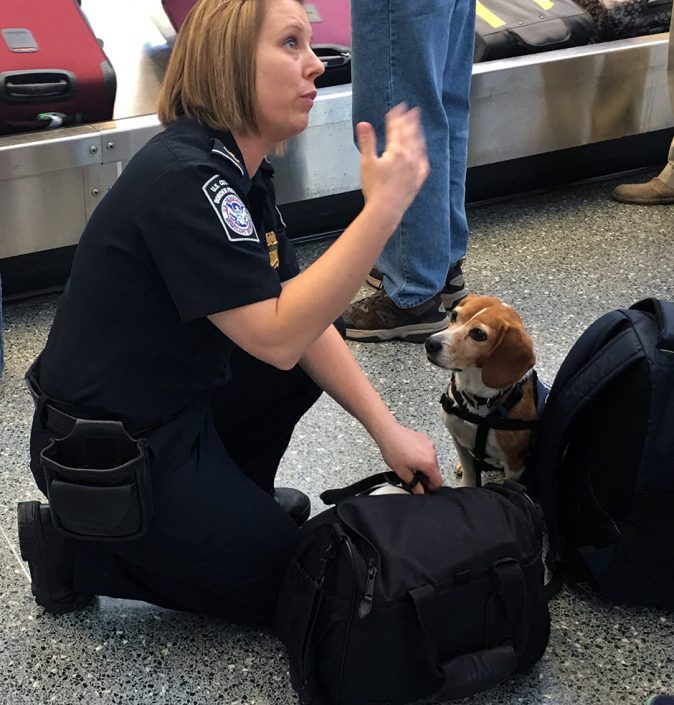 Melissa Wallace, with her dog Auburn, talks with travelers after the dog sniffed out food in their bags. 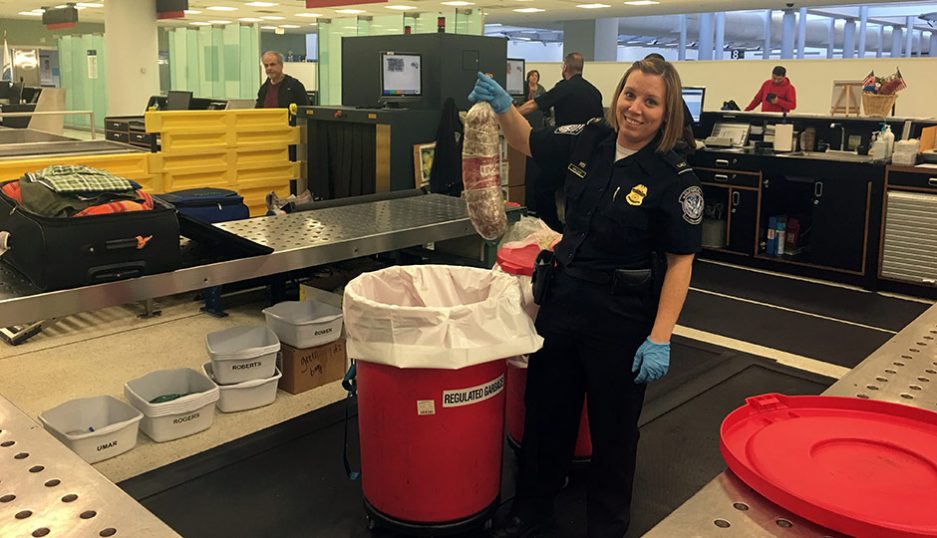 Melissa Wallace holds some of the food confiscated at PHL on a day earlier this month. 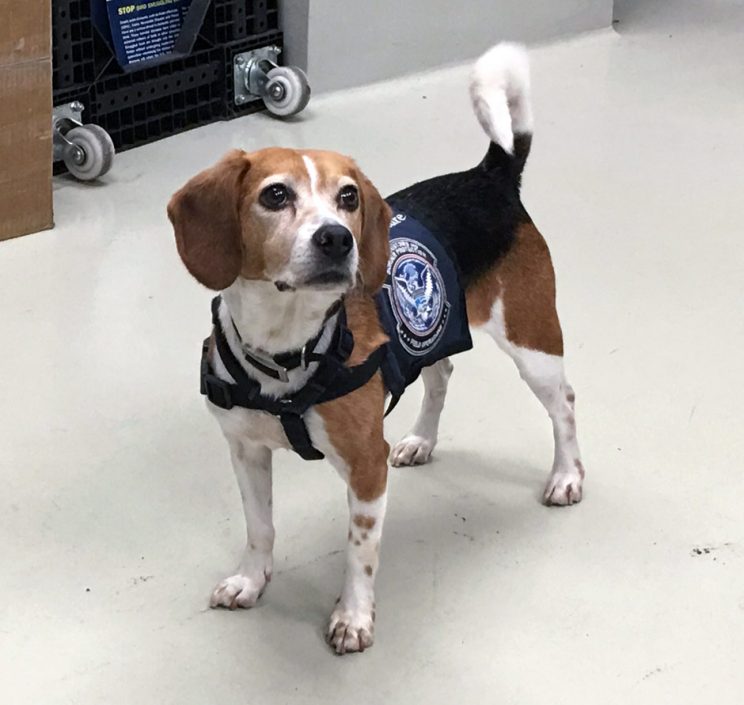 K9 Auburn, showing off her Customs and Border Protection vest. 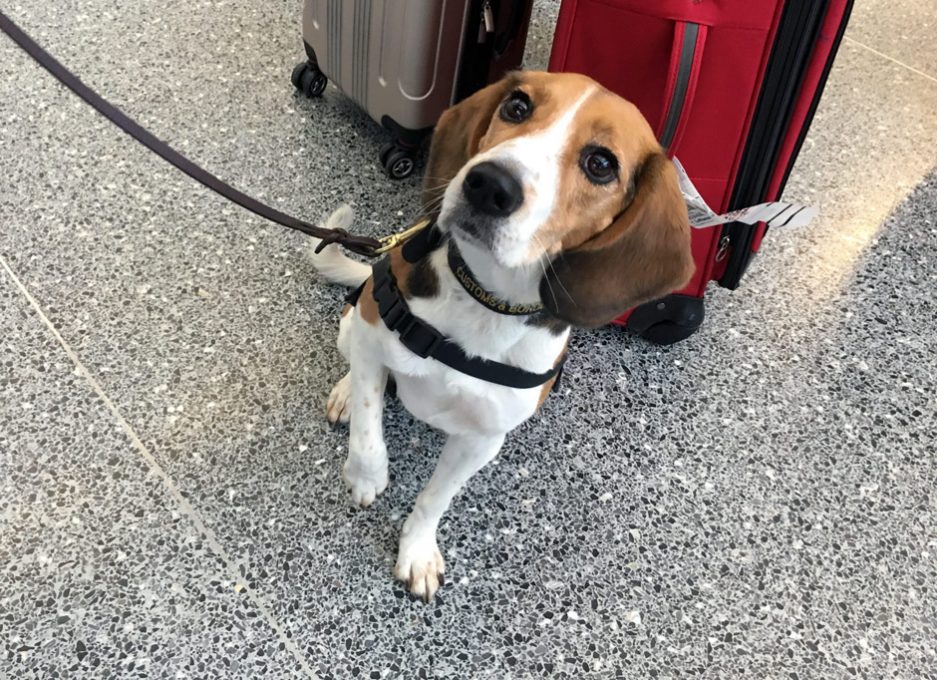 Handler Mary Yasson will be adopting K9 Yoshi after the dog retires next year. 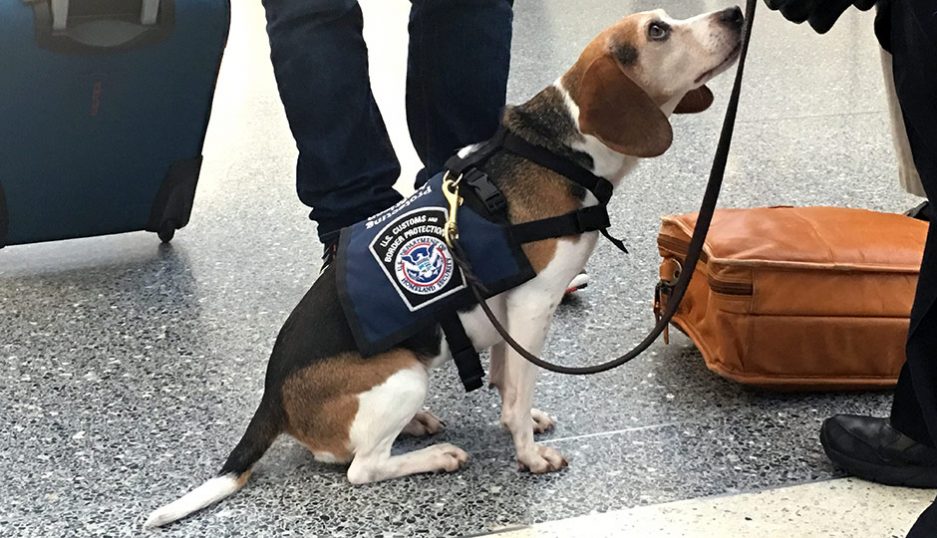 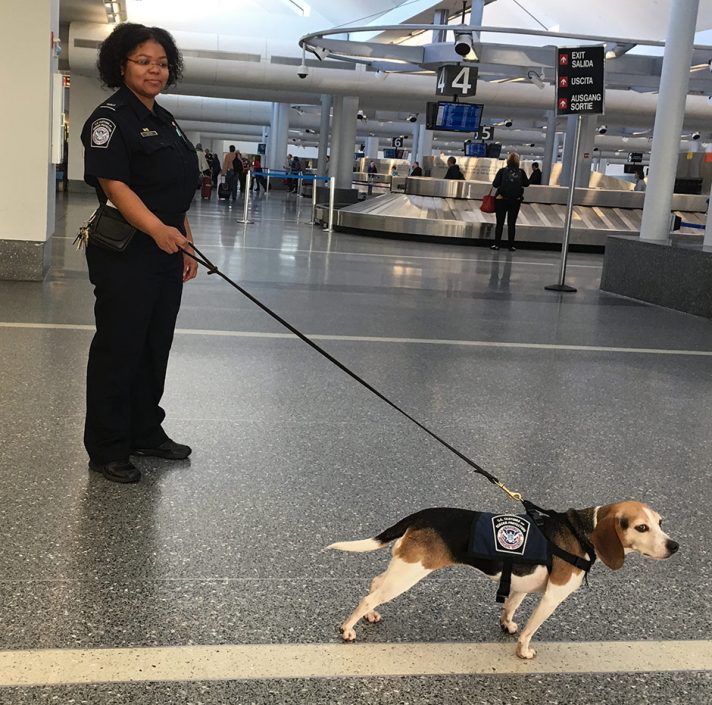 K9 Mattie, on a leash 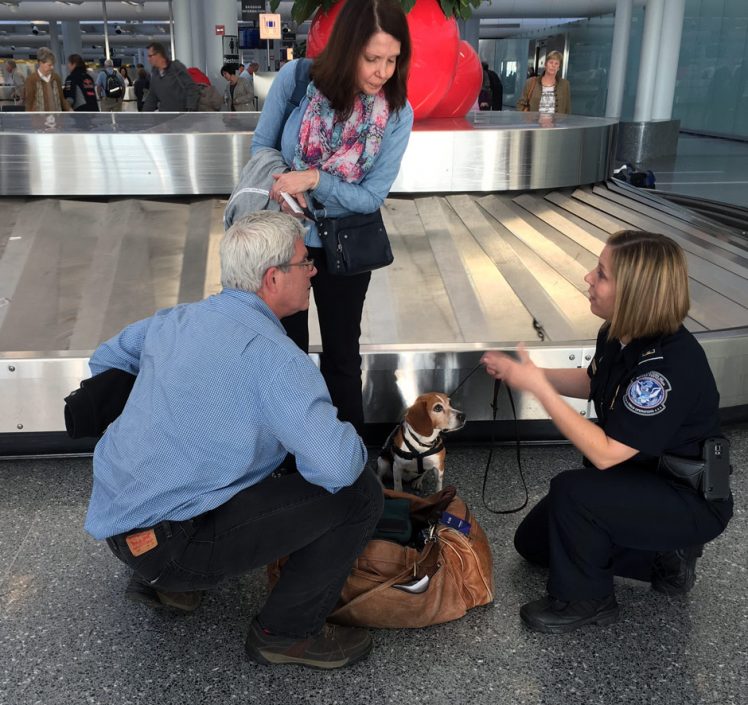 Melissa Wallace, with her dog Auburn, talks to travelers after the dog found food in one of their bags. 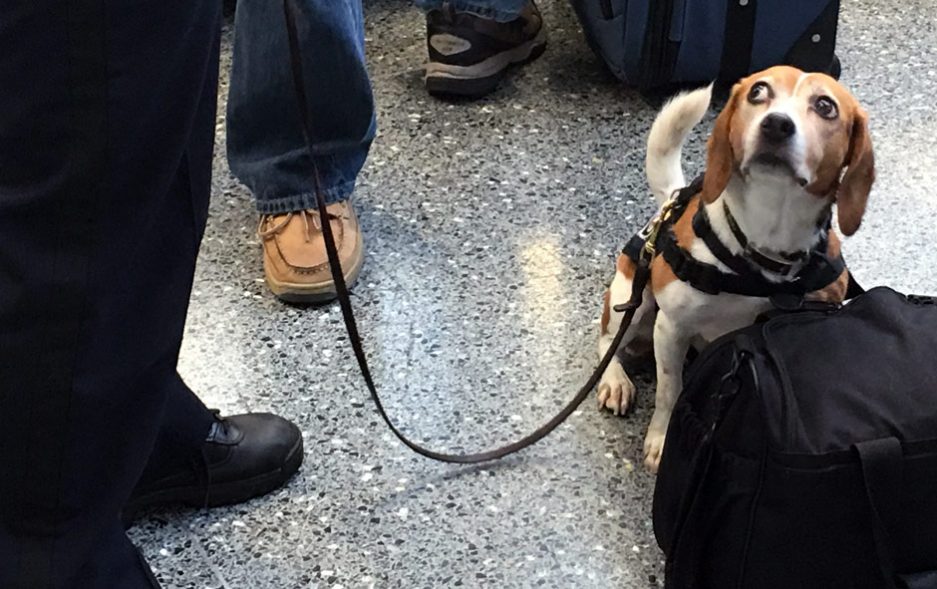 Auburn the dog side-eyes her handler. 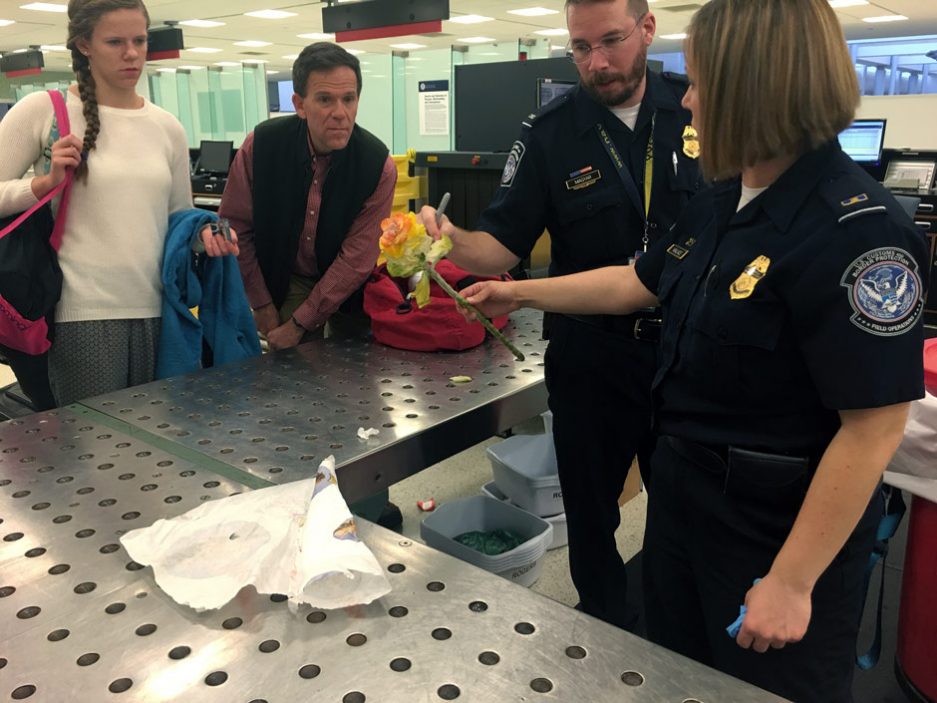 Melissa Wallace holds a flower that was confiscated from luggage at PHL. 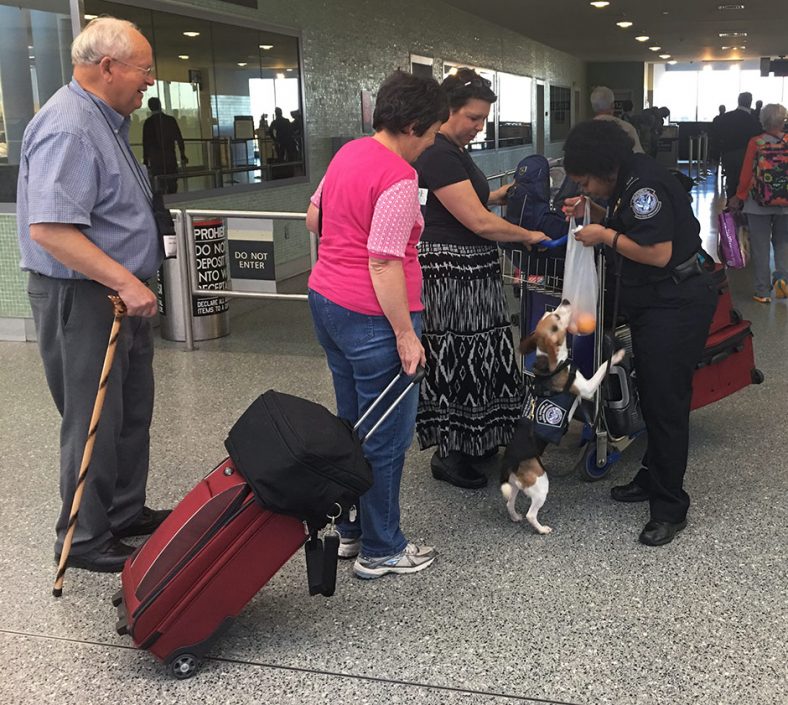 Handler Sharon Taylor checks out oranges in a passenger's luggage after being alerted by K9 Maddie. 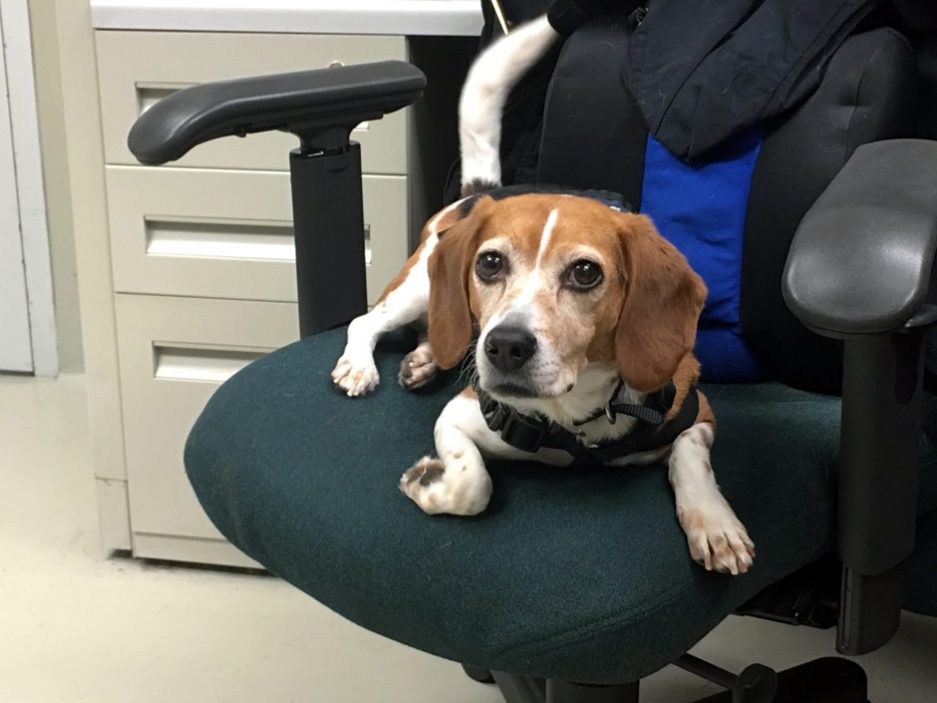 K9 Auburn the dog takes a break and relaxes on her handler's chair.

When customs officers find food on a traveler, he or she is directed to a separate area where the food is inspected. Sometimes travelers are able to keep the food and continue through, but often it is confiscated. (Travelers who knowingly bring food into the country can be fined up to $10,000, though in practice fines are usually much lower.) That food is later inspected by CBP officers for invasive critters and the like, and then incinerated. The whole incineration thing may seem harsh, but agriculture products from other parts of the world can harbor unseen threats like plant pests or animal diseases.

PHL Terminal A West handles about 3,700 international passengers a day in winter and 6,500 in summer. (This excludes most flights from Canada, where passengers are pre-cleared by U.S. Customs before leaving.) Generally, three agriculture K9s are on at one time. About 1,300 dogs work for Customs and Border Protection across the country.

Travelers sometimes recoil at drug- or bomb-sniffing dogs, which tend to be more imposing breeds like German shepherds. But on a recent afternoon at PHL, everyone was friendly to the doggies — even though they were inspecting their luggage for prohibited items. It’s actually a problem: People want to pet the working pups, when they really shouldn’t. “People always want to pet the dogs,” says Melissa Wallace, K9 Auburn’s handler. “It’s almost hard to keep them away.”

But why beagles? The breed is ideal for sniffing out travelers’ luggage at the airport for just that reason. Most travelers don’t get spooked by a beagle —what with their smaller frames and big, puppy-dog eyes — as they might a German shepherd, a dog commonly used in drug and bomb detection. Using beagles is just good PR. And since they were originally bred to aid in hunting, beagles are great at sniffing out prohibited fruits, veggies, meats, cheeses and other food items from travelers’ bags.

K9 Auburn recently sniffed out plants from a “trusted” traveler at PHL, which also netted an additional $40,000 in undeclared currency. And, rare for an agriculture K9, Auburn has a drug seizure to her credit: She sniffed out 89 pounds of the mild stimulant khat, a controlled substance, in 2010.

Wallace is partially deaf, but is able to understand travelers by reading lips. She says the job has gotten easier over time. “When I first started this job, it was just harder because people have different accents,” she says. “But after a while, the questions become repetitive. I know what they’re asking now, so it’s not as hard as it used to be.”

K9 Auburn is eight, and about a year away from retirement. Like many handlers, Wallace plans to adopt Auburn when she retires. (Mary Yasson, who handles K9 Yoshi, will also be adopting her dog when it’s time for retirement.)

Wallace, who has a degree in environmental science from Rochester Institute of Technology, was previously an agriculture specialist with CBP. “One day I started working at the airport, and I see a K9 officer walking by with a beagle. I said, ‘I gotta do this.’… I’m very happy. I love this job.”