The Beautiful Destruction of Market East

The old Snellenburg's department store building came down to make way for the new East Market development. It's been gorgeous to watch. A few years ago I bought a $10 photograph at Mostly Books. My friend told me it was too much, but I didn’t bother to haggle and now it’s on my wall. It’s of Snellenburg’s at 11th and Market. I’m not sure where it’s from, but there’s a card glued to it describing the old department store. The card says the photo is courtesy the Community College of Philadelphia. I’ve assumed it was in the lobby of a since-closed building, but that’s just a guess.

Of course, I never saw that Snellenburg’s in real life. The store closed in 1962. By the time I was a kid, it had been altered and was unrecognizable to the building today. I live nearby, and I occasionally stopped by some of the stores in the building (on the way back from The Gallery). It was your usual Center City strip: City Blue, USA Boutique, Hallmark, an eyeglasses store, a cell phone shop, a dollar store, a scrub shop, a store called “FUNKY” I never set foot in.

Now those stores are gone. Over the past few months, the building has been demolished for the East Market development, a fancy new project that’s one of the many changes coming to the neighborhood.

The demolition started from the back — the Ludlow Street side — and moved forward. It seemed like “The Destructors.” It has been beautiful. I’ve taken photos with my phone every time I pass the demolition site for the past few months. Here’s a collection of them. 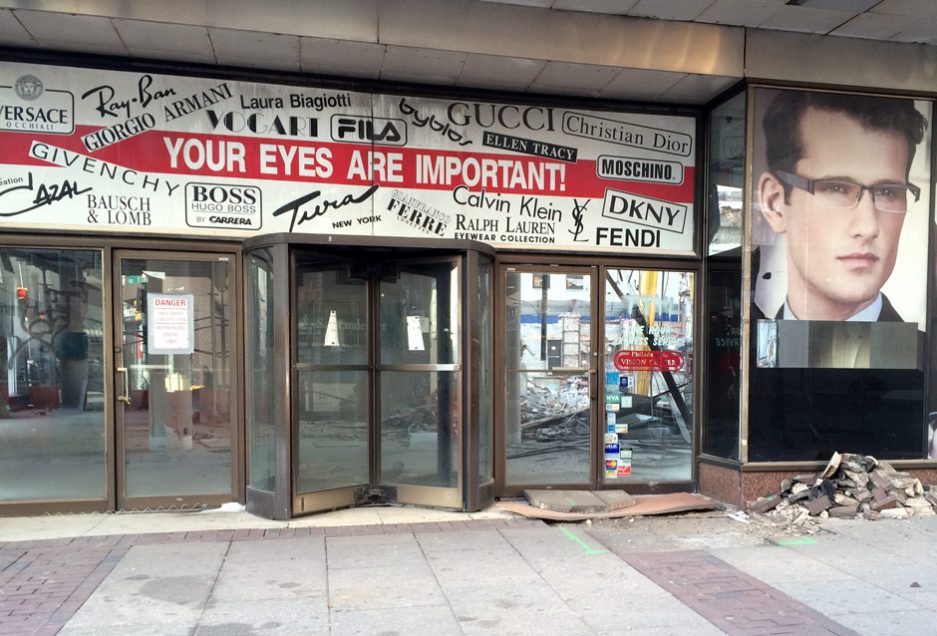 Your Eyes Are Important!

There was at least a month where you could walk by the site and see storefronts with absolutely nothing behind them.

This was always my favorite store sign on this block. Is this jewelry for the New Age or for the previous Ice Age? Or is this store predicting a new Ice Age? Now that it's gone, I'll never unravel this mystery. 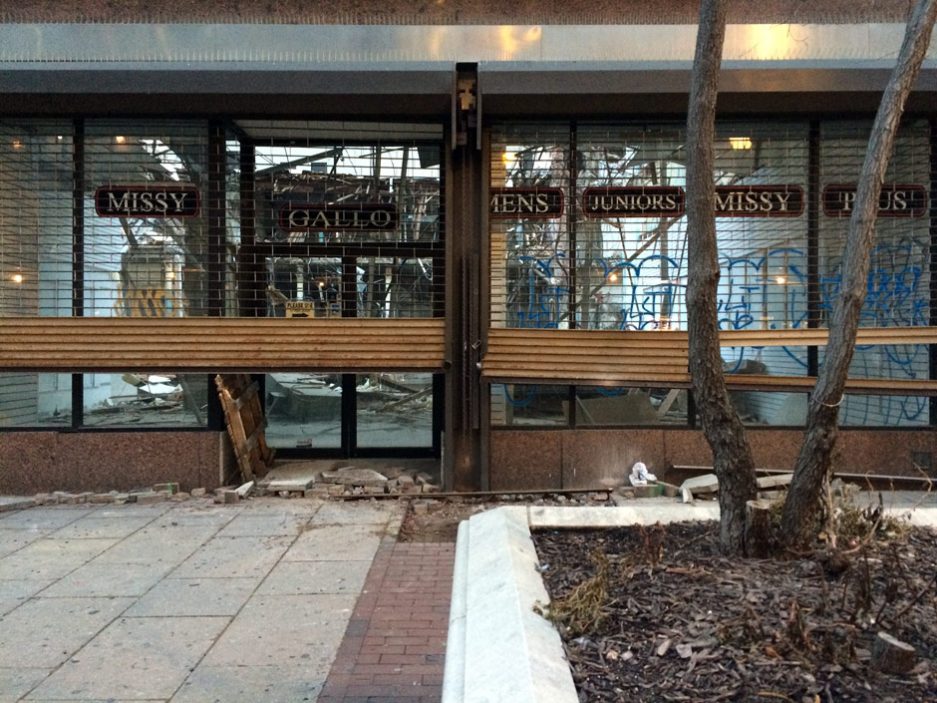 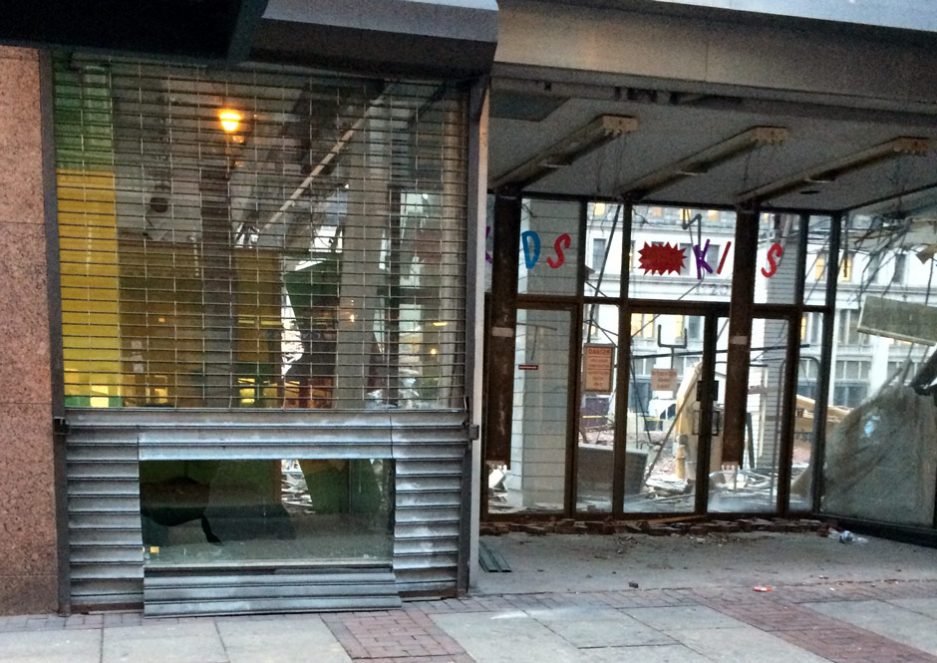 Another look inside the demolition. 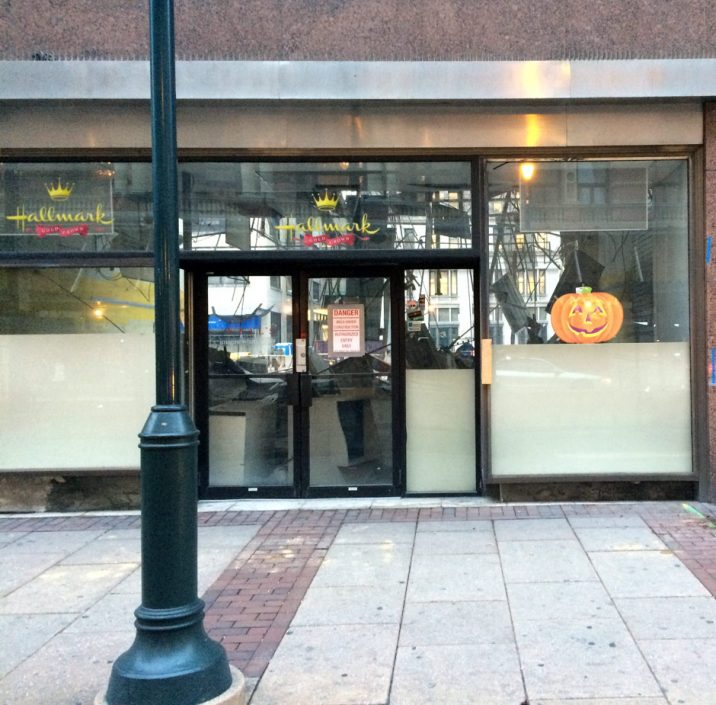 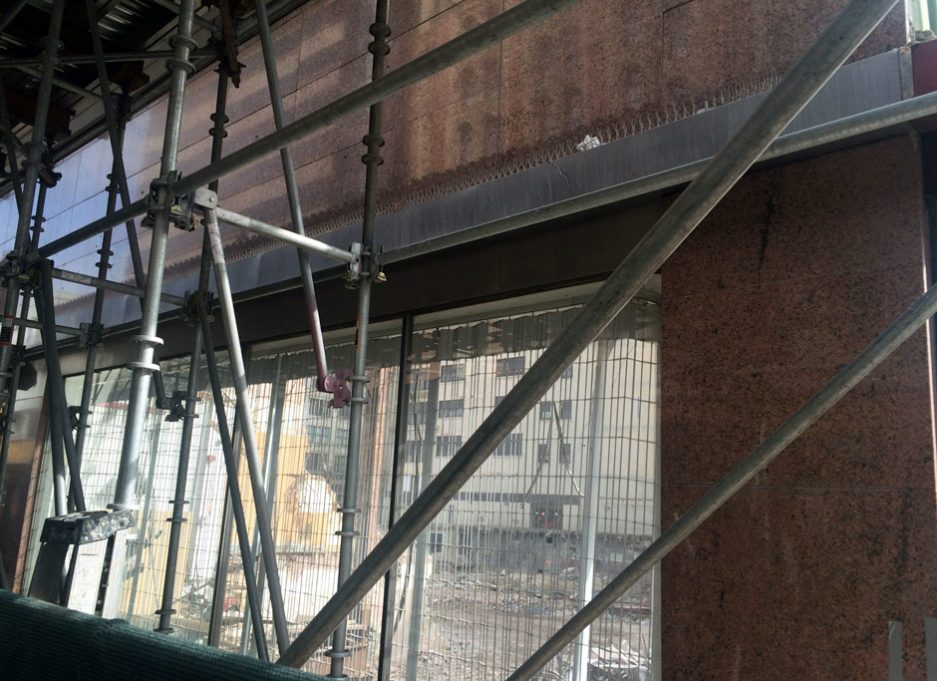 You can still walk on the south side of Market Street, as there's a covered walkway in front of the construction site. This was the view for a while. 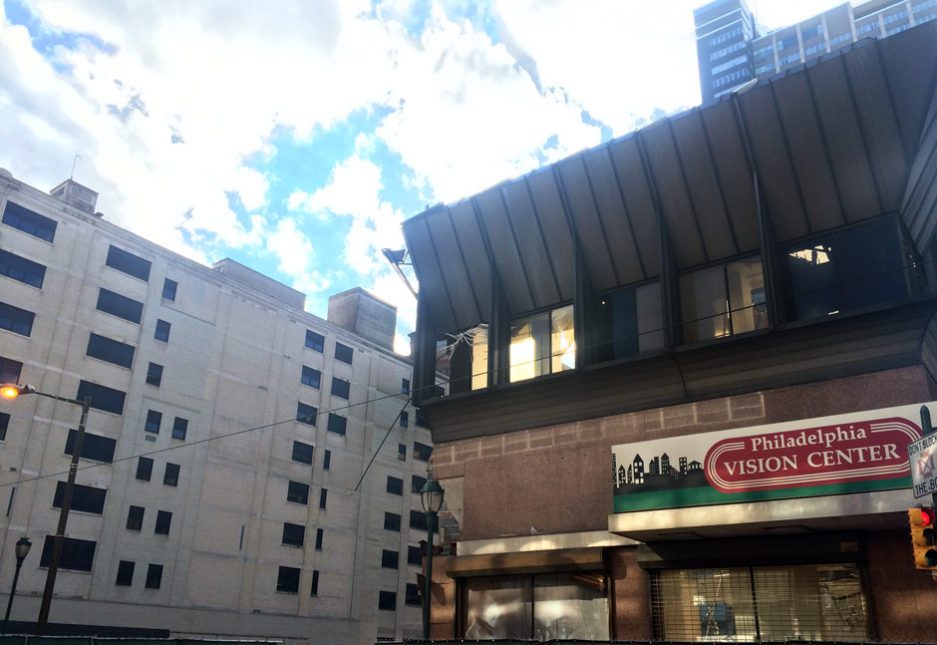 Eventually, the facade began to come down. 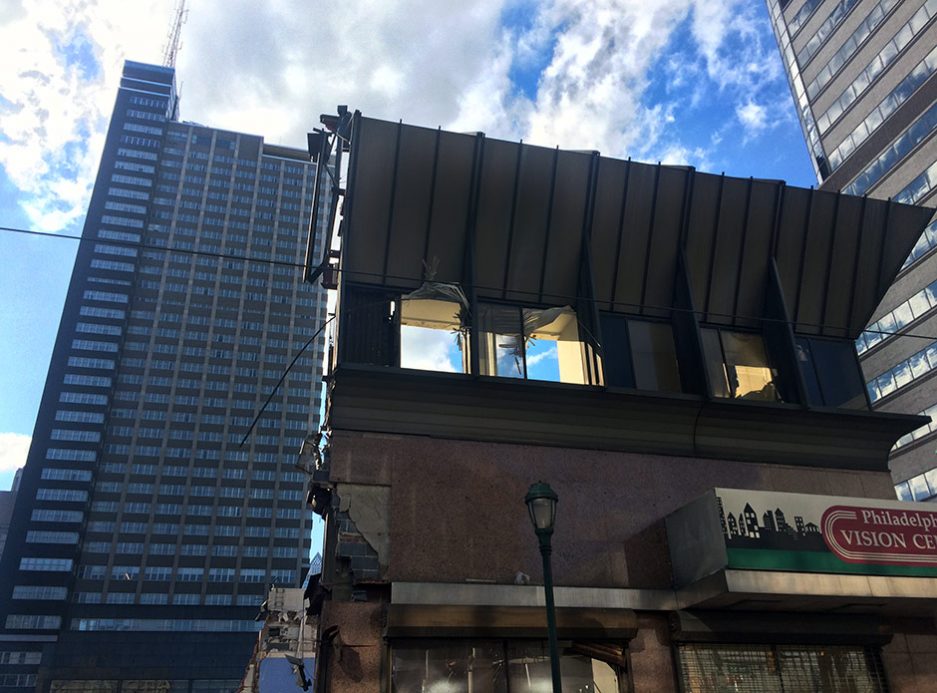 As construction continued, you started to be able to see buildings from the street you couldn't really see before. 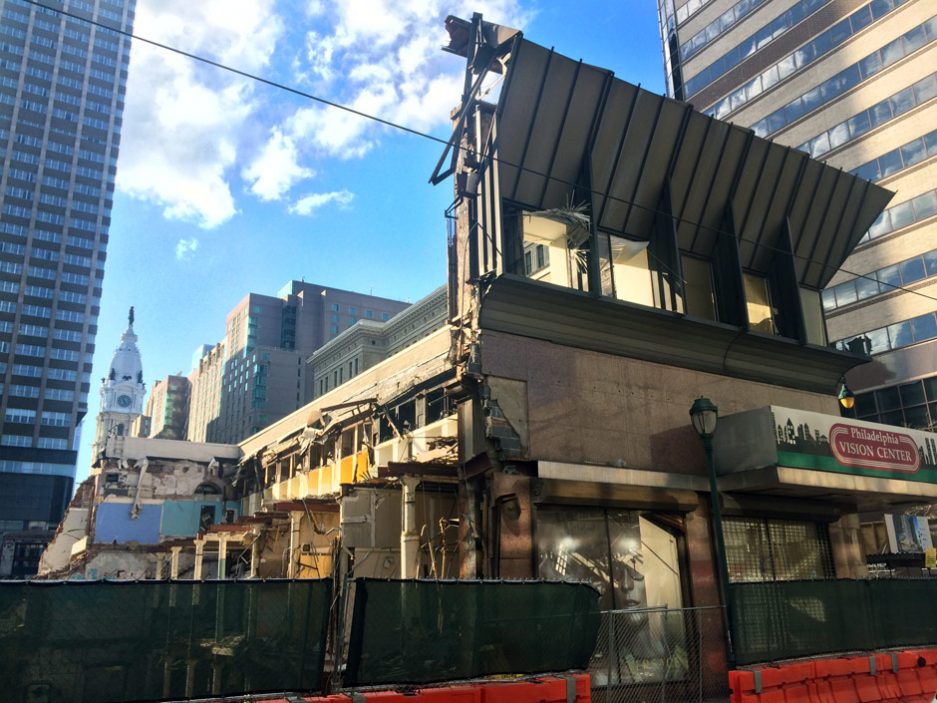 See, you could see City Hall from 11th Street! Normally you'd have to, um, go farther up 11th Street to see it. Okay, maybe it's not that exciting. 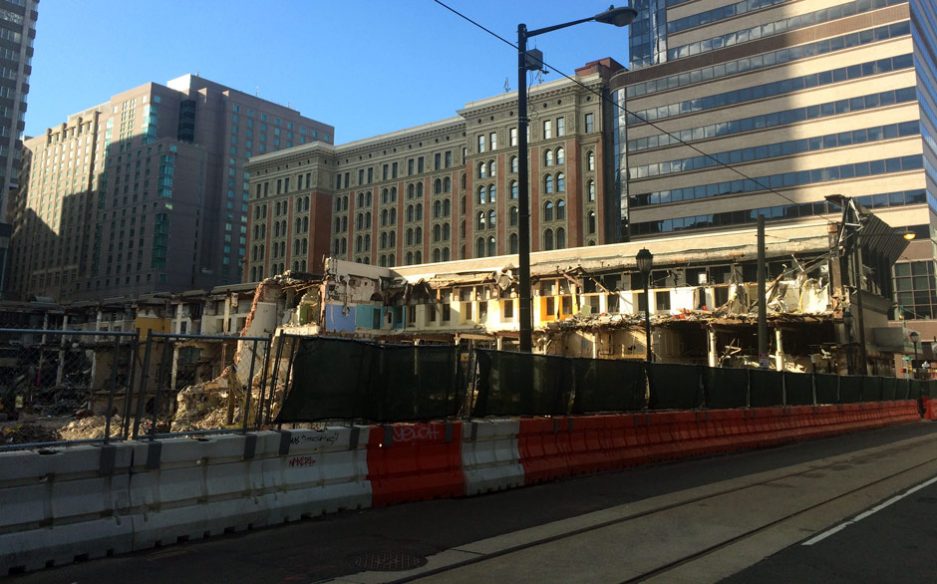 Demolition, From the Back

It became a game for me walking by. What would be changed this day? Eventually the building was almost completely demolished. 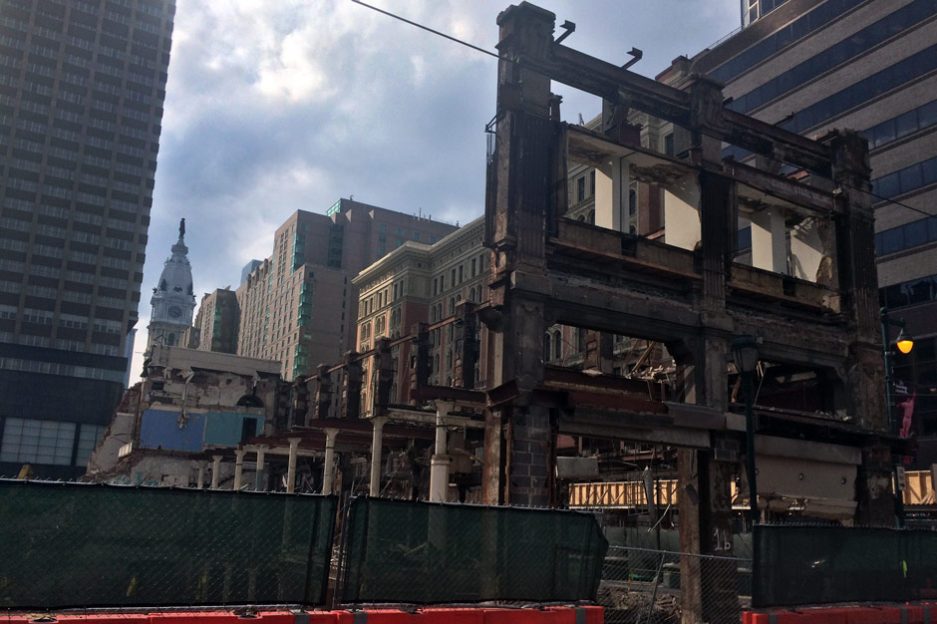 A Skeleton of a Building

Eventually, it started to disappear completely. 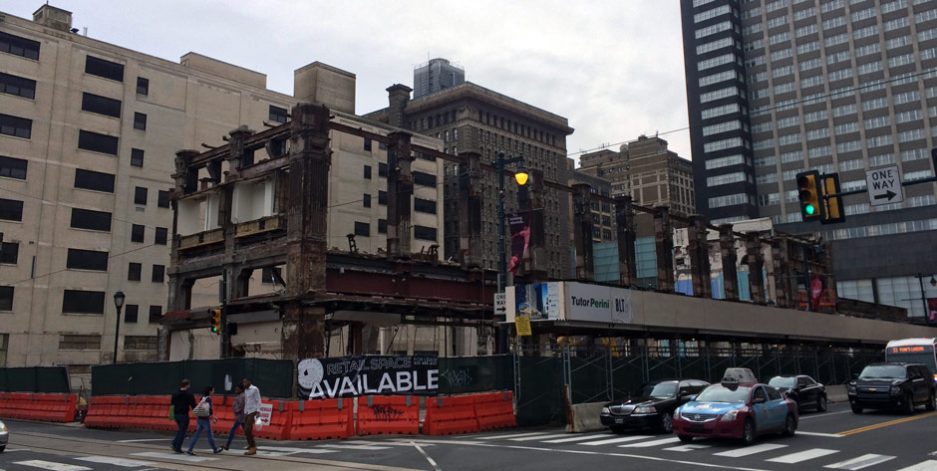 It took a while, but after a few months the building was almost completely gone. 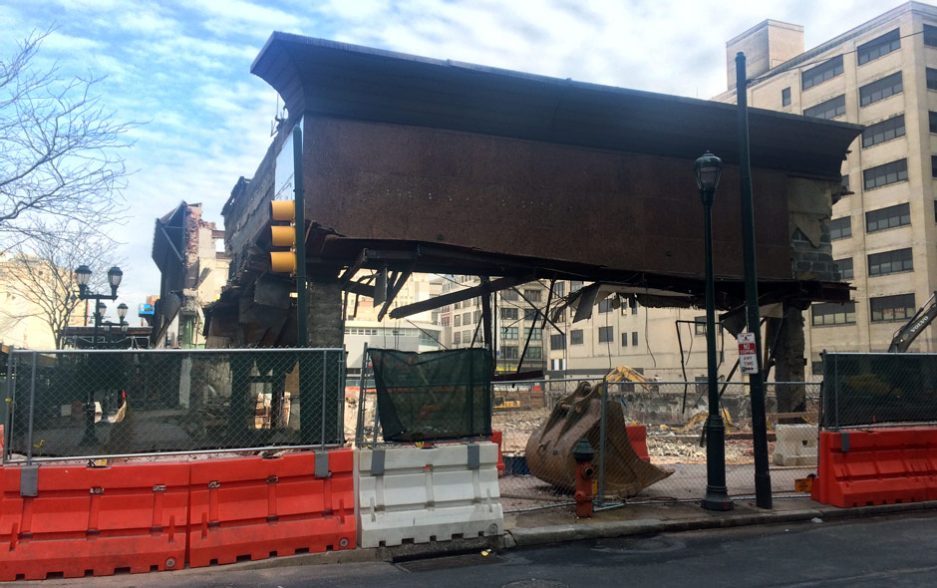 There used to be a cell phone store in this spot. 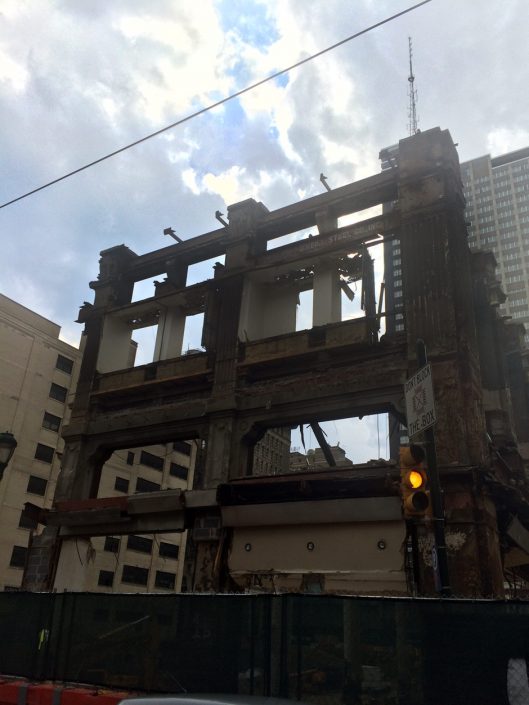 As demolition continued, you could start to see the old Snellenburg's facade that had been covered over years before. 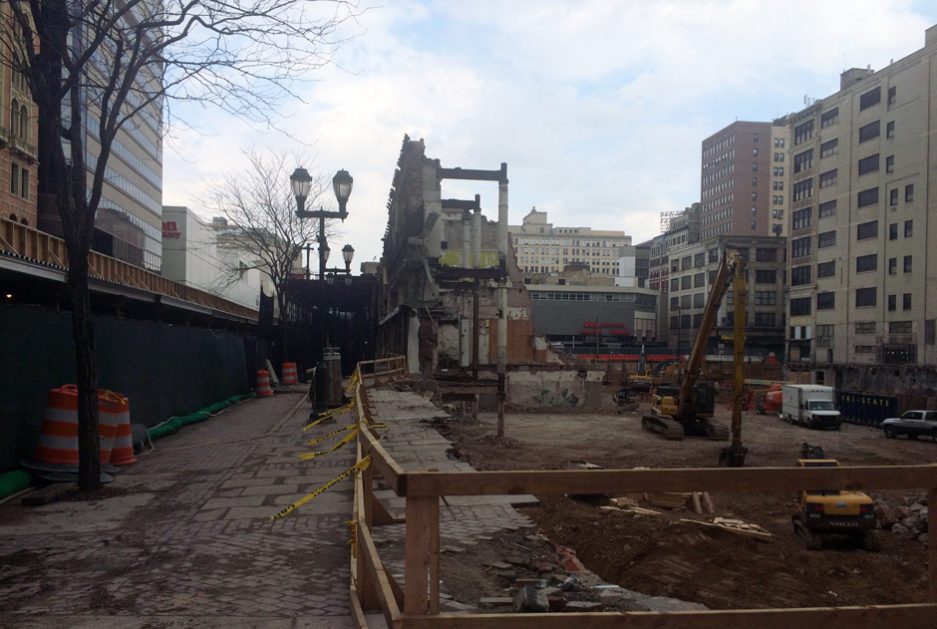 The part closest to the center of the 1100 block stayed up the longest. 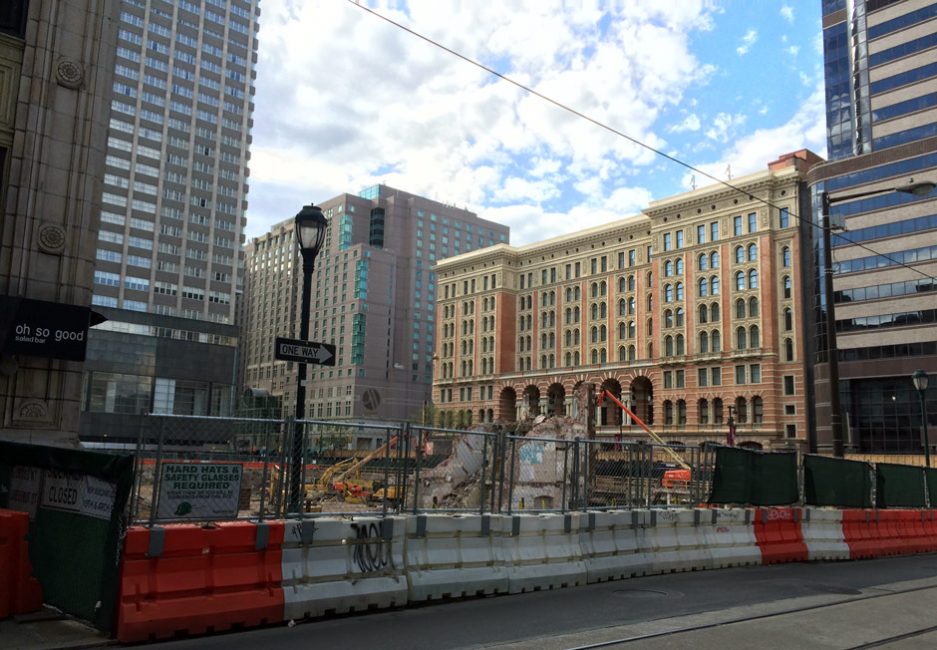 Reading Terminal in the Background

You generally only get a glimpse of the old Reading Terminal (and current Convention Center entrance). Seeing the whole building from more of a distance really gives you more of a sense of how cool it is. 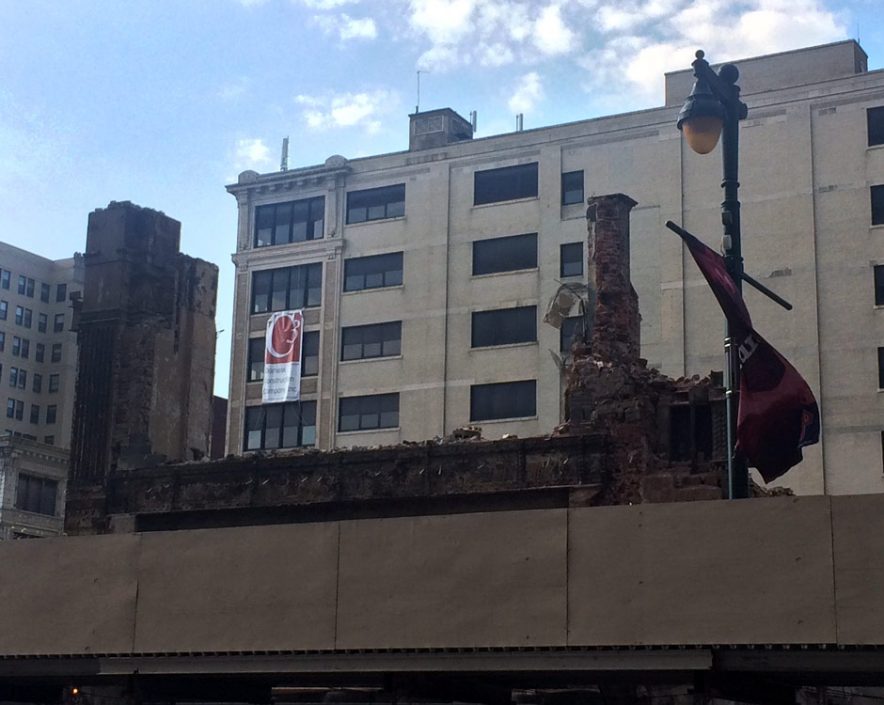 This was the final part of the building left. It's gone now. 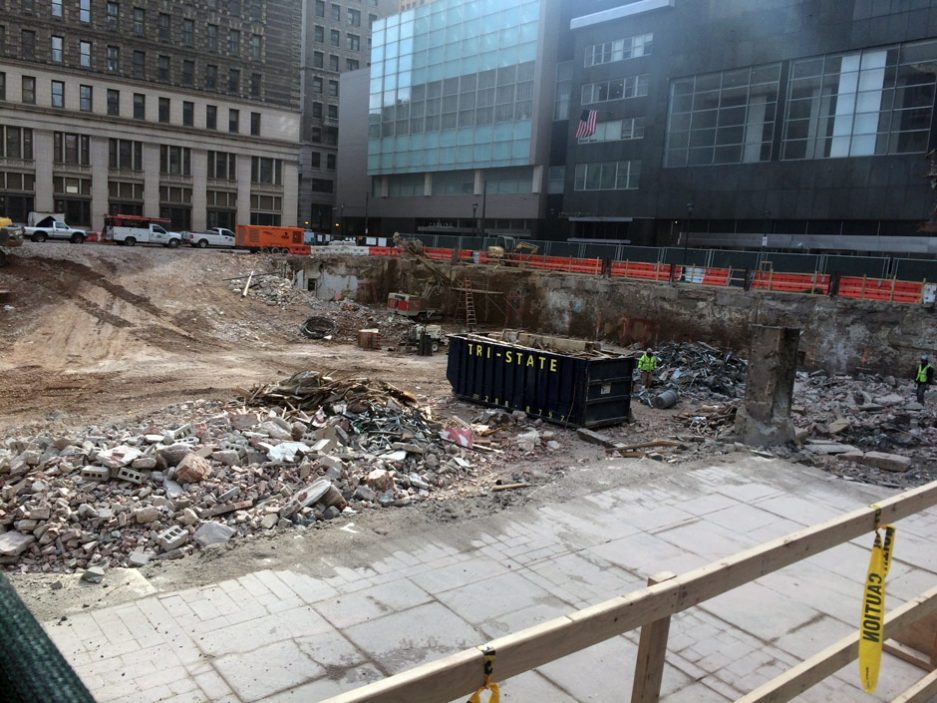 Now, it's just a construction site. Bring on East Market!