Research shows that women are more likely to get interrupted when speaking. These tactics can help. 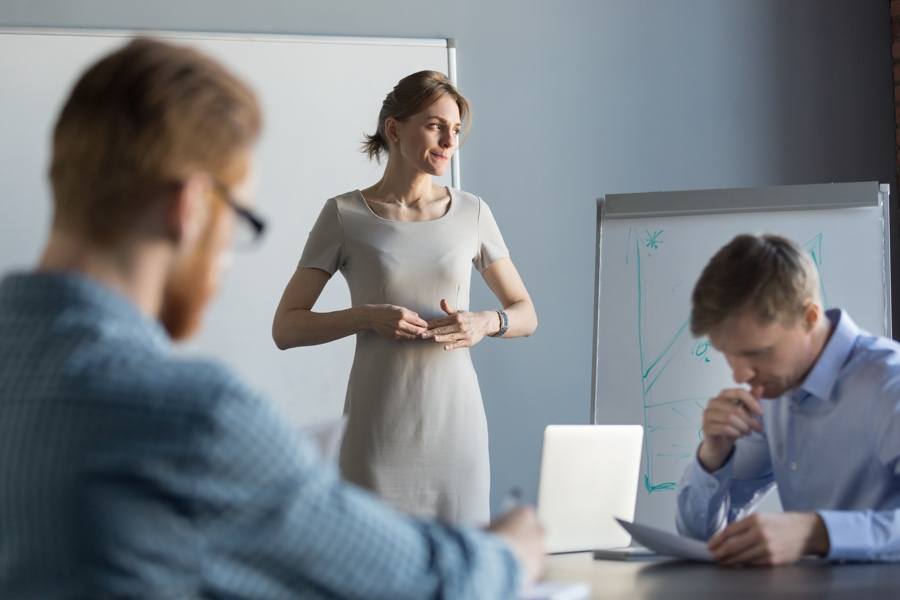 Imagine sitting in an important meeting when you have an exciting new idea you want to share. You muster the courage to say it but when you get to the punchline, someone talks over you. The point gets derailed, the moment is gone, and people forget you were even talking.

Interruptions can be disheartening, and though it might seem like a universal issue — something we’ve all likely experienced — it’s not. Research shows it is 33 percent more likely to happen to women. It even happens more often to female Supreme Court justices.

Overcoming interruptions isn’t just about being heard in the moment. It’s also about people seeing you and your ideas as having weight and importance. And it helps to have some comebacks prepared to immediately address everyday slights like interruptions that diminish your voice.

Just because you’re more likely to be cut off doesn’t mean you have to let it happen. There are ways to smartly address interruptions in a productive way, while still getting your point across.

Below are the techniques I’ve used in meetings to be heard when I keep getting talked over, and in my experience, they work. They vary between direct moves that shut down interruptions to less direct approaches that still redirect behavior.

One of the most important things you can do when you’re constantly interrupted is to continue talking. Don’t yield to the interrupter just because they’re greedily grabbing the mic.

This technique works best for the serial offender — the person who consistently and blatantly interrupts you (or other women).

With these types of interrupters, it’s important to be assertive with your voice because it lets them know that you can — and will — stand your ground.

Sometimes these people might be unaware that they’re talking over people. But if you let them get away with it, they’re going to keep doing it. It might be uncomfortable to get into this habit but know that if you still can’t be heard over the offender, you may need to speak even louder!

2. Use Your Body Language

I learned this tactic while parenting my young twins, and I quickly learned it’s effective in business scenarios, too.

This simple trick works by playing on more senses than just the ears. When people can see you claim space, they’re more likely to pay attention to you. It also helps if you use other bodily cues like making yourself “bigger” either by standing, sitting up straight, or even spreading out papers in front of you on the table.

Too often women make themselves physically smaller in social situations and this makes it much easier for others to ignore them.

If interruptions are way too commonplace within your team, it’s worth having a constructive conversation about it. Keep it fact-oriented by calling out specific instances of interruption.

The key here is to avoid using hypotheticals or innuendo. This approach gives interrupters an opportunity to correct their behavior if they are somehow unaware of it, and keeping it in the group context takes the pressure off of any one person.

You can extend help to other women, too. As women in Obama’s white house cabinet learned to do, amplify and repeat other women’s messages when they make a key point. Cut off those interrupting your fellow colleague and put the spotlight back on her.

4. Bring It Up Outside of the Group

We all know it can be humiliating to get called out in front of a group. If there’s a serial offender in your organization that blatantly interrupts others, it may be best to take it offline. Especially if you suspect they’re unaware of how their behavior is affecting others.

For example, Carrie, one woman I trained, was being chronically interrupted by her manager. Courageously, she decided to confront him privately about the situation. He apologized and ended up addressing the issue openly with the team.

Not only did she solve the issue with her manager, but by bringing it to light, Carrie catalyzed a bigger change: giving the whole team a chance to consider whether they could be more inclusive and aware of their habits.

If all else fails, partner up with a teammate or manager to call out the interrupting behavior. Ideally this will be someone who’s already motivated to foster inclusivity and collaboration within the team, such as a male ally.

You can build your ally’s awareness by pointing out specific instances and observations so they can pay close attention in meetings and help you challenge interrupters.

Often, people who are called out for interrupting will reevaluate, but for those who are slow to change, it might help if more than one person is calling them out on it with specifics. Try saying things like, “You keep interrupting Mary” or “The way you’re talking over people is making me uncomfortable.”

You and your ally can also boost women’s voices by helping each team member “pass the mic” in an equitable way. Try saying, “We’ve heard a lot from Seth and Carlos today, I’d like to hear what Karima and Jen think.”

We’re entering a new era of work, and that brings challenges and uncomfortable conversations about how gender bias still lives. But the work we do now will usher in a new generation of confident, outspoken women who aren’t afraid to make themselves heard.

You deserve a voice at the table just as much as anyone. And your ideas? They’re good enough the way they are. In fact, they’ll only make your team better.

Selena Rezvani is a VP at Be Leaderly, where she teaches women at all levels to self-advocate and negotiate like a boss. She also consults to employers on how to make work truly “work” for women – by architecting workplace assessments and culture change. She’s the author of Pushback: How Smart Women Ask—and Stand Up—for What They Want and is based in Philadelphia. Follow her @SelenaRezvani.