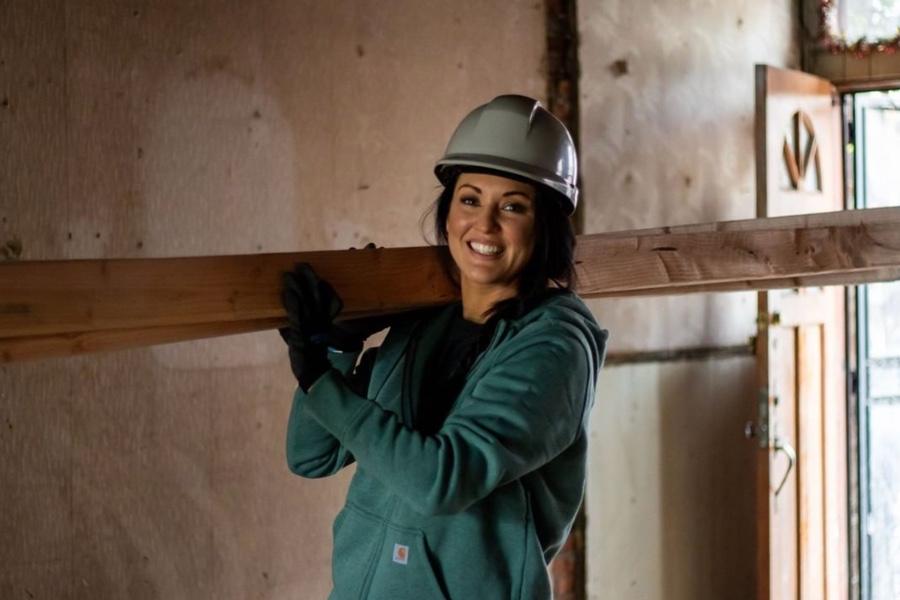 Los Angeles has the Kardashians. New York has everyone else. But now Philly has a TV celebrity of its own: Rachel Street. The Hestia Construction founder and president hosted and starred on the home renovation show Philly Revival, which aired this spring on the DIY Network. Street could be seen doing everything from tearing down walls and hammering lumber to picking out backsplashes for rehabbed urban kitchens. The Philly native and Temple alumna talked to us about the show, along with her insights on rehabbing — not flipping — the city. “Flipping implies that it’s a cheap renovation,” Street said. Here, she explains what’s next amid the DIY Network’s buyout, the state of Philly’s houses and what it’s like to be a woman in the construction industry.

I grew up in… Chester Springs.

My job is… I do everything. I’m a real estate agent and a contractor and a designer. So I do everything from purchasing the property to designing it, renovating it and then selling it.

I started my business… as a response to seeing a ton of rehabs on the market that looked exactly the same. We try to keep as much history and character in the homes as possible or in some cases add it back into it if it’s been stripped of everything good.

TV changed my business because… before the TV show, I was doing a little bit of each [real estate, construction and home rehab]. I still am, but we’re no longer doing construction work for other people. I’m working on my own projects, which I was doing some, but definitely the show pushed me into doing work solely on my own projects to renovate and sell, which is really where I wanted to be anyway.

I’ve become focused on...the charity side. I’m trying to start a program doing free renovations for people in need. As somebody that’s fixing up these homes, we are contributing to raising the home values in the area. I wanted to be conscious of that and think about ways that we could also benefit the community and those in those neighbors that might be struggling.

Philly’s homes have problems like… We really see a lot of people living in homes that aren’t habitable. And a lot of those problems that are associated with those homes are from something that started probably pretty small, like a small roof leak, which then over time turns into mold and rots. From something that maybe could cost $200 to fix, now you have a $25,000 problem.

Being a woman in construction…. was definitely a bit tough when I first started out. If you’re a guy and you walk into a building supply store and you order a bunch of lumber, nobody second-guesses you, even if you’re 25. It’s normal for them. But if you’re a woman, it’s like, “Oh, are you doing a little project?”

One time people doubted me… was when I started out, I was working on one of my first renovations. I had a really old, beat-up pickup truck that I bought for $500 in North Philly. I would pull up and be shoveling out buckets of sand and stone to mix concrete or whatever I was doing. I live in Passyunk, and I would pull up in front of that fountain. I was working there; I have a house there. There are a lot of older gentlemen that would sit in that little park around the fountain and watch me and make fun of me. In the beginning, I was so self-conscious.

Now… those same people embrace it. They saw the finished product, and now they come to me for construction advice.

One of my favorite neighborhoods to build in is... South Philly. I love it because I live there. I love going around the neighborhood and working around the people I see everyday. It’s fun to see some of the same faces and learn about the history of those homes. One of the homes that I’m going to be starting [soon] was actually owned by Jerry Blavat. They used to call him the “Geater With the Heater” as a DJ. It’s a really fun history.

Being on TV is… At first you’re so nervous, and then it kind of becomes second nature. You kind of start ignoring the cameras. What’s good is we really had an awesome crew, so it really was a nice process start to finish. It’s still surreal to see myself, like when I flip on the TV and my big face is on there, I’m like, “Oh, God.”

What’s next with my TV show is…. we finished filming the first season, and it aired. Right now we’re trying to figure out what’s going to happen with it. The DIY Network got purchased by [Chip and Joanna Gaines]. They’re making the whole network into the Magnolia Network, so we’re not really sure yet what that means for all of our shows, if they’ll go to HGTV or another Discovery channel or what will happen with them.