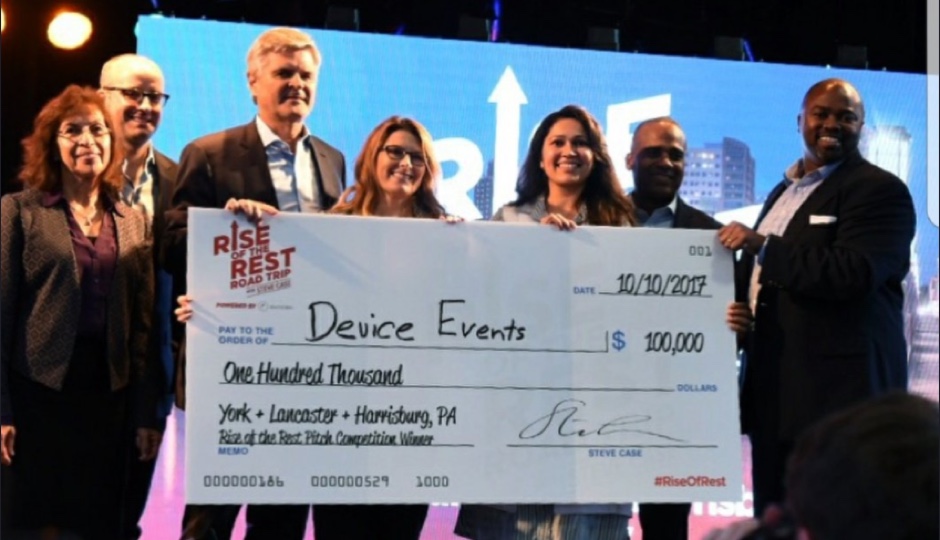 Judges on stage at central Pa.’s Rise of the Rest pitch competition. Image via Twitter.

We are better and stronger together. Revolution’s Rise of the Rest (ROTR) Tour stop in central Pennsylvania on Tuesday proved this when it brought together the tech communities of York, Lancaster and Harrisburg for a day of networking, frank conversations and, of course, the tour’s $100,000 pitch competition.

The day celebrated the unique aspects of tech entrepreneurship in each city but also put a spotlight on the region as a whole as the bus traveled from York to Lancaster, and to the final stop in Harrisburg. Governor Wolf was present for much of the tour and spoke to the high economic impact of entrepreneurship, specifically tech entrepreneurship. Deputy Secretary Sheri Collins was also present as she was for when AOL cofounder and Revolution’s chairman and CEO Steve Case visited us in Philly in 2015. The Pitch Competition at the Harrisburg Midtown Art Center brought tech startups from across the central Pennsylvania region to compete for the $100,000 check. I joined Steve on stage along with four other judges:

Excited to welcome @SteveCase and @revolution back to PA! @GovernorTomWolf saying a few words before the fireside chat! pic.twitter.com/tVM10kxKz7

The winning company, Device Events, “develops software that identifies patterns of problems with medical devices to improve patient safety and reduce risk.” (Find a complete list of finalists at the end of this story.)

More than the investment from Steve, the ROTR events are an opportunity for communities to come together and explore ways to invest in each other. As Steve noted, he and his team get on the bus at the end of the day and roll to the next stop. It is up to us to keep the momentum going and to make things happen in the communities we call home.

Pennsylvania boasts strong higher educational institutions throughout the state that are surrounded by deeply committed and community-focused tech professionals so it is not surprising the Revolution team has visited us so many times. The diversity of innovation occurring in the state – from robotics to life sciences to agtech – that have the ability to scale nationally and globally, is another reason Pennsylvania is attractive to investors.

We have an opportunity to bring Steve back for another visit. ROTR is currently accepting votes for the city to which they should go BACK. Voting ends today at 4pm EST. If you haven’t already, take a look and vote for Philly. We are in second place. Let’s bring the Revolution team back to the city that knows a thing or two about that!

Archna Sahay is the City of Philadelphia’s former director of entrepreneurial investment.