Or the second. Or the 11th. The redevelopers of the "Boner 4Ever" building have put out the call for commercial tenants for the mixed-use project. 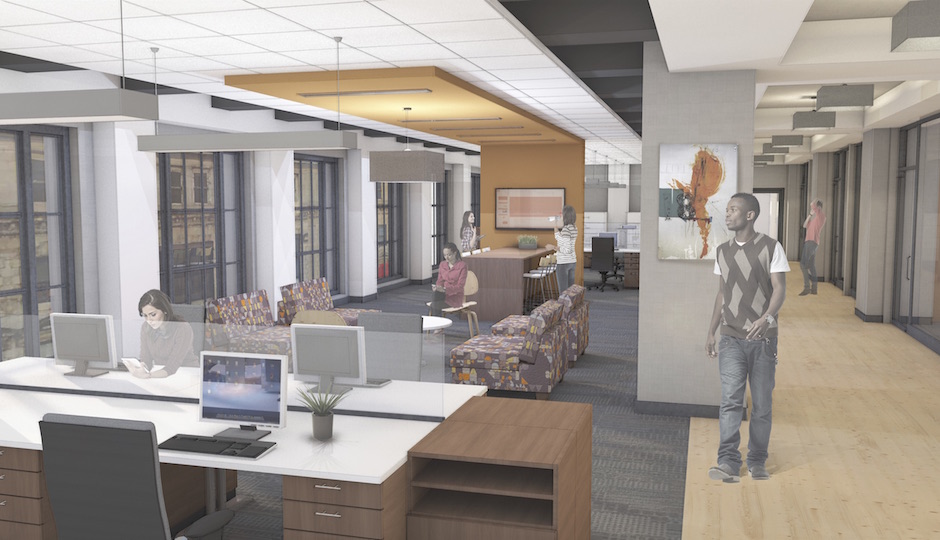 Rendering of a floor of the Beury Building configured for an office client. | Renderings: Kitchen & Associates via Shift Capital

“The transit-oriented development we wasted” is about to be wasted no more.

And the people who are bringing what may be the most prominent abandoned shell in North Philadelphia back from the undead are now looking for offices and shops to fill its commercial floors.

Work on restoring the 1926 Beury Building — known to many urban-decay aficionados as the “Boner 4Ever” building thanks to the tags two local graffitists splashed prominently on its north and south facades — won’t start until year’s end, but owner Shift Capital has already put out a call for expressions of interest from businesses interested in taking space on its first, second and 11th floors.

Brian Murray, Shift Capital principal and CEO, broke down the mix of tenants Shift would like to see in the building as follows: “The first floor is a retail user, such as health services, a grocery or a restaurant. The other floors are mostly office users that need to have a central location near transit.” 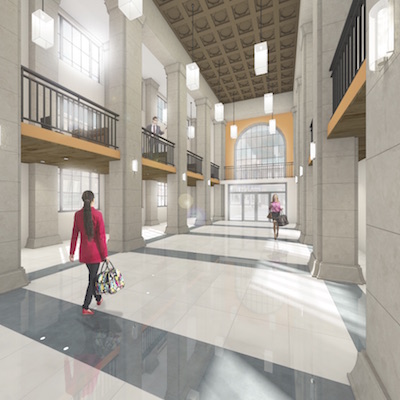 Rendering of the Beury Building lobby.

Transit is the building’s ace in the hole. The building, an exuberant Art Deco structure that’s listed on the city historic register, sits where Germantown Avenue crosses Broad Street, just north of where it crosses Erie Avenue. The triangular intersection, one of the few in the city that could approximate Times Square both in form and in appearance (in a parallel universe, that is), has been a transit hub ever since a Broad Street Subway express station opened beneath it the year after the Beury Building’s cornerstone was laid. (The building even had direct access to the subway station.) In addition to the subway, seven other SEPTA surface routes converge on the intersection, more than at any other non-terminal transit station on the rapid transit network.

As for why the commercial space was split between the two lower floors and the 11th floor, Murray explained, “This is just the way the building had to come together to make the development plan work. The top commercial floor will fit for an office user.”

The building will also contain 80 apartments, 50 of them affordable and 30 market-rate. Preleasing of the residential space is not taking place at the moment.

The Beury Building project fits in with Shift Capital’s doing-well-and-doing-good orientation. “Shift Capital’s mission is to employ socially conscious real estate development as a tool to revitalize communities and reward investors,” Murray explained. “We’re very much in the mold of a triple-bottom-line-thinking business such as a B Corp.” The company’s projects are focused on northern Kensington and the area around the Broad-Erie-Germantown intersection in Nicetown.

It should come as no surprise, then, that Kensington-based Shift has partnered with an equally socially conscious architect to design the reconstruction project. Collingswood-based Kitchen and Associates‘ portfolio includes dozens of affordable housing projects, including the Queen Lane and Norman Blumberg redevelopment projects; community facilities such as the Salvation Army’s Kroc Center in Camden; supportive housing facilities like Project HOME’s JBJ Soul Homes, and scores of public buildings throughout the region and beyond.

Shift hopes that this project will not only serve as the catalyst for further investment at and around the intersection but also stimulate foot traffic through it on the part of tenants, near neighbors, and students, faculty and staff at Temple’s medical campus, which begins one block south of the intersection.

Construction is slated to begin by the end of this year, with occupancy scheduled for the summer of 2019. Those interested in learning about commercial space leasing opportunities may contact Maria Sourbeer at Shift Capital.