I Love My Job: Jack Morey of Morey’s Piers in Wildwood

He tells us about Wildwood's party reputation, his long drive from Seattle, and how he hates spray sunscreen just as much as every other right-thinking person in the world. 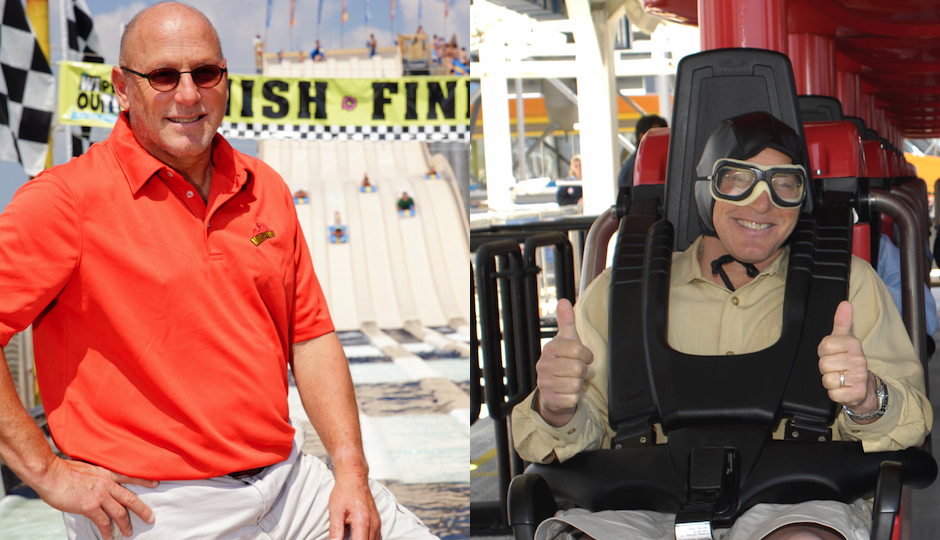 Though summer doesn’t officially start until June 21st, here in the Philadelphia area, we like to think it starts this weekend. So we checked in with Jack Morey of Wildwood’s legendary and longstanding Morey’s Piers to see what’s in store this season.

I grew up in… Ft. Lauderdale, but I was born here. My dad’s from here, my mom’s from Reading. They met in Wildwood. He was a builder. She was engaged to somebody else, and he had to convince her to marry him. And we spent our time between Ft. Lauderdale and here in Wildwood.

We opened our first hotel in… 1957. My dad used to build doo-wop hotels for other people, and one day he decided to do it for himself. In 1957, he opened the Fantasy. Every other year, they’d sell a hotel and build another and move closer and closer to the beach. 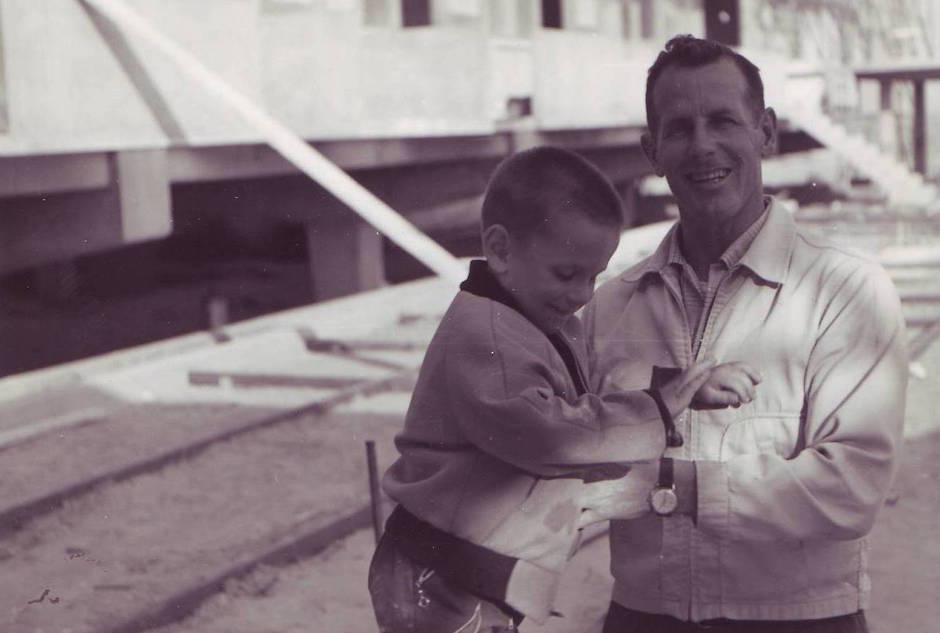 Jack and his father in Wildwood.

This year at Morey’s Piers we’re… doubling-down on food. We’re reinventing most of the menus, and we’ve got a new relationship with the Garces Group. They’re consulting, not running. But they’re helping us get a lot more serious about the food. But the really cool thing is the Penthouse at the Pan-Am, where our family lived in the summer in the 60s and 70s. We just redesigned it for this season, back to an awful lot of what it was originally was: an elegant showpiece born in the early 70s with a little bit of James Bond, some 60s old school glamour. It’s a helluva place. 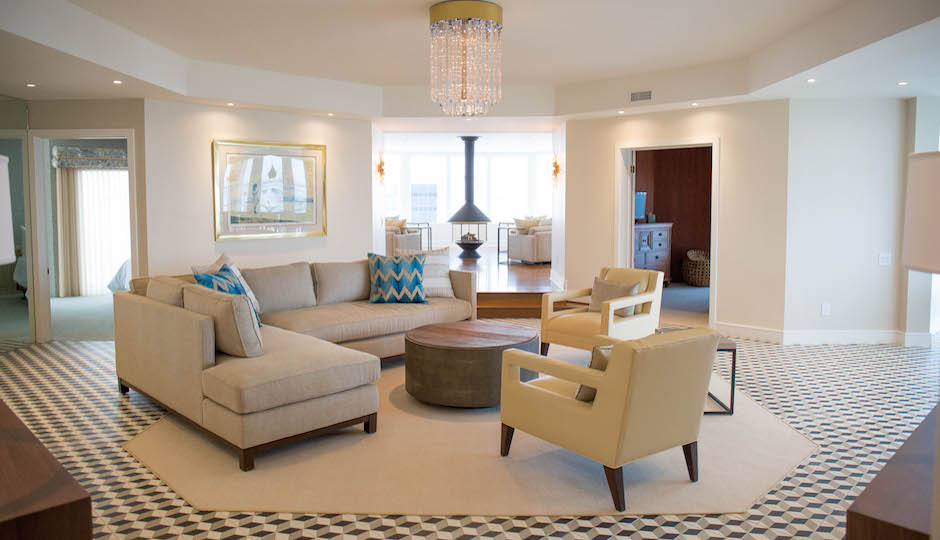 Not Your Average Jersey Shore Motel: The Penthouse at Morey’s Pan-Am resort.

The last time I was on a roller coaster was… very recently. It was the Great Nor’Easter, our coaster that was built in 1995. We just re-tracked the entire thing at a cost of $5 million. It’s a much smoother ride now. Guests now demand a smoother experience. Shaking your brains out used to be cool.

People would be surprised to know that I can… barefoot waterski. My dad taught me years ago. I can also ride a unicycle.

The best non-Morey’s place to eat in Wildwood is… the Lobster House. There’s something about it. It’s not the finest of food, but it’s classic and just tacky enough to be fun. Here at Morey’s, you’ve gotta eat at Breakfast In the Sky, our Ferris wheel gourmet breakfast 150-feet in the air. And Joe’s Fish Company, which is super great and really fresh.

The hardest thing about my job is… that it’s a seasonal business. It takes 1,700 people to make it go around.

My role at Morey’s is basically… the planning of it all. My brother Will is the CEO. I get to travel a lot and see a lot of things that wind up shaping the environment that we’re in. I have a backlog of projects on my desk. You want to build them all, but you just can’t. I’m working on four for next year. If I’m lucky, we’ll get to do one. In the next three years, there will be a major waterpark expansion and at least one new rollercoaster. It’s a lot of fun, but it’s also really hard.

Will’s role is… lots of things. I get to think of ten things and he gets to keep me from building nine of them.

The best place I’ve traveled to was… New Zealand, three or four years ago. My son was in school in Australia and we went to visit him, because we were afraid he wasn’t going to come home. New Zealand is like a giant national park.

One crazy project I haven’t been able to do yet… is a really large rollercoaster that will connect two piers together. It’s really beautiful to look at, and it’s all designed.

Ten years from now, Morey’s will be… internationally recognized as the best seaside park in the world.

The last book I read cover to cover was… Let My People Go Surfing. That’s an excellent book. And Hillbilly Elegy is terrific as well.

The hardest decision I ever had to make in this business… was when we were considering putting up a gate for all of the facilities, meaning people would pay general admission to walk onto the piers. We were on the fence for a long time. We actually decided to do it and then got cold feet. I think it would have been a disaster. Would have changed the entire culture of the boardwalk. This is a very public place. We made the right decision.

I get most of my ideas from… public spaces in cities. I love public spaces. There is a very social thing going on in public spaces. I don’t like theme parks that much. It’s a very controlled environment. The city’s big organic thing is a better social experience.

When someone uses that spray sunscreen near me, I think… man, that is really stupid.

The furthest I have ever driven was… from Seattle. It was a few months ago. I was leaving Colorado — it was me, my wife, and our two dogs — and I thought rather than just go home, let’s go to Seattle and Oregon. We did 8,260 miles in a small Jeep.

My second favorite shore town is… probably Cape May.

If I were the mayor of Wildwood, I would… embrace longer-term strategies in order to develop a really unique resort. Those strategies would include a beach park — a park on the beach. Only Wildwood has the opportunity to do that, because we have the widest beach. And I would focus like a hawk on public spaces, because only then would the place become a great spot to live year-round. The other thing I’d do is merge all three towns together — Wildwood, Wildwood Crest, and North Wildwood. Them being separate is a carryover of provincial thinking from 100 years ago that makes no sense whatsoever today.

The negative partying reputation that Wildwood has… is, no doubt, to some extent deserved, and it’s a very hard thing to get rid of. But I don’t think it’s a crazy party place. When I talk to people who don’t think they’ll like it, I give them some free pier tickets, and they always love it.

The best beach movie ever made was… Jaws. We played Jaws on the beach 15 years ago and 600 people showed up to watch it.

When we hear complaints about Morey’s… we consider it a learning opportunity. The customer really is often not right, but still. I would rather hear critiques than people always saying nice things. I can’t make the place better when you just say nice things. You gotta have some thick skin in this business.