Food Fight at 40th and Walnut

Penn has announced that an Acme supermarket will open in the space that has housed the Fresh Grocer since it was built. There's only one hitch: The Fresh Grocer's still there and fighting its eviction. 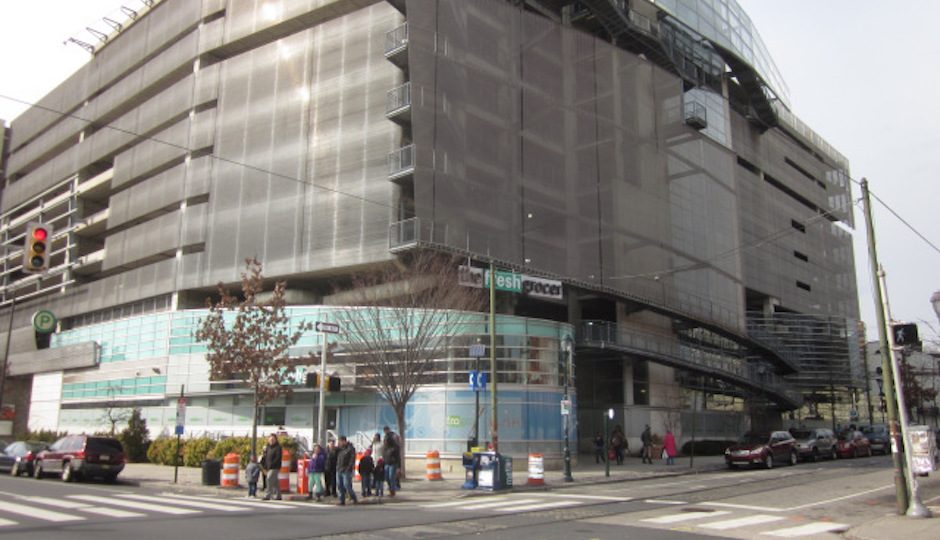 Penn has announced that Acme Markets will open a new store at the 40th and Walnut birthplace of the Fresh Grocer chain. But first, the Fresh Grocer has to move out. No word yet on when that will happen. | Photo: Gabriel Gottlieb, Philadelphia Heights blog

The University of Pennsylvania and Acme Markets announced yesterday (April 10) that Acme has signed a lease to open a new store in University City at the northwest corner of 40th and Walnut streets in a parking garage with ground-floor retail owned by the university.

According to the announcement, Acme plans to invest millions in upgrading the 34,500-square-foot supermarket in order to provide “a first-class urban grocery experience.”

No date for the store’s opening was included in the announcement, and there’s a reason for that: The current operator of the supermarket hasn’t vacated the premises yet.

That would be The Fresh Grocer, the local supermarket chain born at this location. The store opened in 2000 after Penn reached an agreement with Pat Burns, operator of the Drexeline supermarket in Upper Darby, to have him run a new grocery-store concept based on feedback the university had gathered from its Spruce Hill neighbors. The supermarket was part of a larger program of investments and programs Penn launched to stabilize and revive the flagging fortunes of the areas to the west of its campus. (This reporter was employed in Penn’s communications office at the time the store opened.)

The Fresh Grocer proved an immediate hit and showed Burns he could succeed at operating modern supermarkets in urban settings. Since then, the chain added twelve more locations and closed or relocated four of them. Currently, there are nine Fresh Grocer supermarkets in Philadelphia, its inner suburbs and Wilmington, all owned by members of the Wakefern Food Corporation wholesale cooperative, owner of both the Fresh Grocer and ShopRite trademarks.

“The grocery store anchors the 40th Street commercial corridor, which has been the recipient of continuous private investment from Penn for 20 continuous years,” says Jennifer Rizzi, director of communications in Penn’s Office of Facilities and Real Estate Services. Those investments, she said, include not only buildings like the one at 40th and Walnut but also various streetscape improvements aimed at creating a more attractive business district at the campus’ edge.

According to Pizzi, the roots of the current standoff began when the Fresh Grocer failed to renew its lease by a November 2015 deadline, six months after its prior lease expired. When four additional months had passed without a new lease signing, Penn sought proposals from potential operators “with the intent to identify an operator which would provide the best urban grocery store to support the Penn and local community going forward” in the spring of 2016. Several suitors, including Fresh Grocer, submitted proposals, and after reviewing them, Penn began negotiating with Acme in late 2016.

The Fresh Grocer responded with a lawsuit filed in December, and Penn countersued, seeking an injunction from the court to have Fresh Grocer out by March 31, the expiration date of the 2016-17 lease. The court denied Penn’s request on the grounds that there was a dispute between Penn and the Fresh Grocer over what actually happened with the lease. The Fresh Grocer’s lawsuit remains scheduled for a trial, and since the supermarket rejects Penn’s contention that the lease is now no longer in effect, it continues to operate at 40th and Walnut.

The Fresh Grocer is taking out ads in The Daily Pennsylvanian to rally support for its position, including one scheduled to run tomorrow promoting a social media campaign using the hashtag #SavePennFroGro. Meanwhile, Pizzi says, “Penn will continue ongoing legal proceedings to enforce the lease and enable its new supermarket operator, Acme Markets, to begin renovations to the market space. We respect the legal process, so as it unfolds, we’ll know better the timing of the Fresh Grocer store closure and then renovation by Acme to move in.”

Assuming, that is, that the landlord prevails in this landlord-tenant dispute.