The fearless leader discusses her role at Widener, Sanctuary Campuses, and why she didn't sign the letter from university presidents to Trump, which criticized his immigration order. 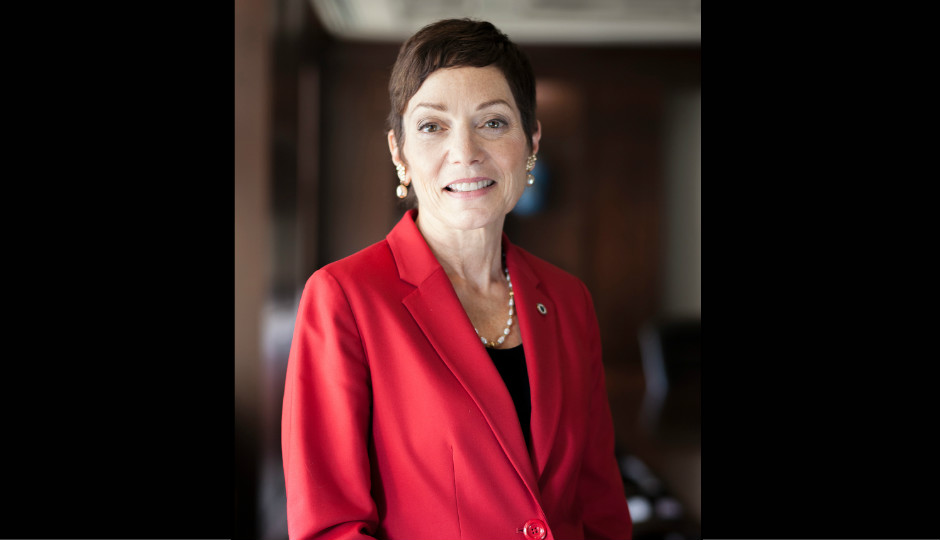 When Julie E. Wollman was inaugurated as the 10th president of Widener University in 2016, she also became the university’s first female president. With more than 25 years in higher education, Wollman has developed a strong understanding of the enduring value of education and of a college degree. And Widener surely isn’t her first go at leadership: Before making her way to the Chester-based school, which enrolls more than 6,400 students, Wollman was president of Edinboro University of Pennsylvania. During her time there, she established Porreco College, a satellite campus in Erie, Pa. that offers associate degrees and certificate programs. She’s also held leadership positions at a handful other schools across New England. In this interview, Wollman reflects on her own schooling and tells us a principle she’s championed at Widener. And with a new administration in the White House, Wollman discusses leadership, Betsy DeVos, Sanctuary Campuses, and why she didn’t sign the letter from university presidents to Trump, which criticized his immigration order. Wollman also tells us how she likes to relax and the most important books she’s read recently.

I grew up in … Philadelphia and the surrounding suburbs.

On the weekends I spend my time … mostly doing things related to my work. A lot of hosting of receptions and dinners for alumni and friends of the university. People might think this is terrible, but I really enjoy doing these things on the weekend. As a university president, you really live your work.

A vivid memory from my schooling … are the teachers who saw past my rebellious attitude and helped me see myself as a young scholar, as someone with leadership potential.

My undergrad professors … were wonderful. They reinforced for me the importance of having professors who care. When there’s a famous professor who gives you the sense that they care more about their research than the students, that stinks for undergraduates.

A TV show I’m a fan of is … the Big Bang Theory. And if I really want to relax, I watch the Food Network.

I got into higher education because … there’s no better way to make a difference in the world than through education. You see lives transforming in higher education. And it’s a rewarding career because you have an impact on a large number of people, on the students you’re preparing for the world. Plus, it’s a way to stay in school forever. [Laughs.] I love school.

A principle I’ve championed at Widener is … the expectation that everyone strives for excellence and the highest standards at all times.

That I’m the first female president of the university means … nothing in terms of my work. I’m accountable for and have to produce outstanding work regardless of gender. It also means I’m a role model for students and I take that responsibility seriously. Young women need to see women in leadership positions. And being one who is the first in this position is also important. It sends a signal to people about what they can do. They can believe they can do what they maybe once thought was impossible.

School rankings are a way to … achieve recognition and awareness of your school even though we recognize they are not perfect. There is no perfect way to get at what institutions do. The most important thing is how much personal attention students get and it’s hard to work that into the rankings, for example. 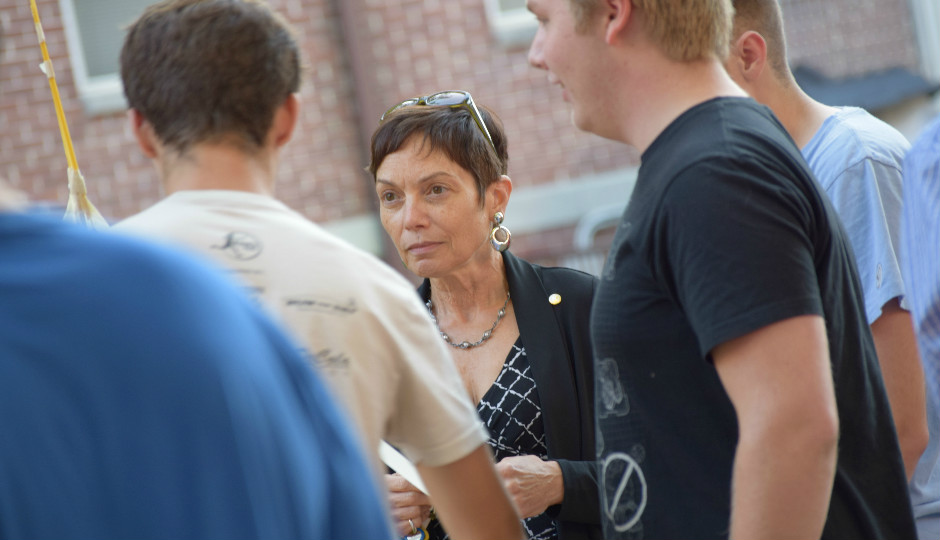 Wollman and her students. Image courtesy of Wollman.

I chose to study English as an undergrad at Harvard because … I love language and linguistics and writing. I knew that’s what I wanted to do. I also loved my English teachers in high school. They inspired me.

Outsiders don’t know that Chester … is like many other post-industrial cities. There are long-time residents who love their communities and families raising their children for a bright future.

Something that distinguishes Widener from other area schools is … our Oskin Leadership Institute. Leadership is a focus at Widener and students are able to earn a leadership certificate no matter what major or minor they have. That’s a huge value added from perspective employers. From the first day students get on campus we ask them “Why are you here?” and “What do you want to do?” With our career development focus, they’re getting real world application.

The appointment of Betsy DeVos means … If I had the answer to that, I’d be highly sought after. [Laughs.] We really don’t know. She has no record in higher ed. We can probably expect fewer regulations for higher ed and that can be good or bad. The regulations are costly and drive up the cost of higher ed. Some have brought up positive changes.

Widener is not a “Sanctuary Campus” because … the idea doesn’t have real meaning or legal standing. There’s really only about a dozen institutions that have declared themselves a Sanctuary Campus. We have the principle “We Are All Widener.” We are an inclusive campus and everyone has a voice here. We hold to that very dearly. That’s the most important statement for us. Campuses that have declared this can mislead students, having them believe that we can protect them from federal law. The key issue is making sure our students understand all that we do as university to keep them safe. That’s how we are a sanctuary for all students.

The most important book I’ve read in the last few years is … one I’m reading right now called Leading on the Creative Edge. So often we get stuck in the way we’ve always done things. We all have the ability to think creatively about how to solve problems. Another one is Letters to My Younger Self, which is edited by a Widener professor and student. It contains letters and poems written by prisoners. They reflect on their experience, and it’s a reflection on the importance of education.

The value of a college degree is … enormous. There are so many things you can’t do without a college degree, and the list is increasing. Analytical thinking, perspective, problem-solving and self-expression are important in any job. Nowadays we move around and don’t stay in the same profession. A college degree gives you those flexible skills you can use no matter what you’re doing.

A personal goal of mine for 2017 is … to read more for enjoyment. It’s so enriching for leaders to read in a broad array of fields.

I want my legacy to be … that people look back and say she was a fearless and courageous leader who brought integrity to Widener. I want them to look back and say we as a team transformed Widener into a first choice institution, a place where everyone wants to go. When I was inaugurated I said the world needs Widener. That’s a concept I want people to understand. I hope that’s part of my legacy.

A benefit to leadership under President Trump is … it’s helped us reinforce and reiterate our focus on “We Are All Widener.” We are focusing on common ground. People here see that their voices matter and our faculty and staff have pulled together for inclusion of all voices.

My favorite part of the school year is … the day when students come back to campus in August. Still love it as I did as a child.

We still need job-focused associate degrees and certificate programs because … a four-year degree isn’t for everyone. One of the greatest values of higher education is diversity and a range of opportunity. Employers are looking for people who can fill their jobs, but no one is doing the job of preparing the students. And for economic development, those kinds of degrees are important. 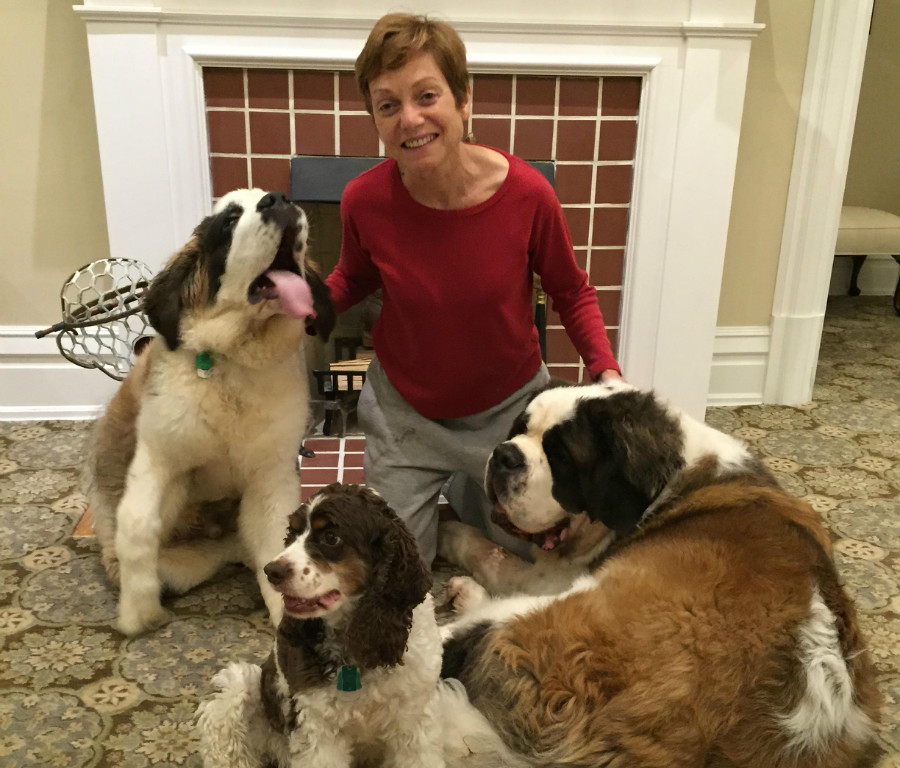 Wollman and her dogs. From L to R: Oliver, Leila, and Brock.

A quirk of mine is … that I use capital letters and punctuation when I text. My daughters tell me so. I like to write correctly no matter what I’m doing.

I like to relax by … spending time with my dogs. I’ll usually spend time with them in the morning before I go to work.

Diversity on campus is … crucial. You can’t achieve excellence without diversity, if you’re not exposed to a diverse range of perspective.

Education is a business because … we have to deal with financial realities and other realities. When you’re running a university campus, you are running a small city. There’s everything from food and living and operations and safety. There’s academics and entertainment. But it’s a business where the quality of the product —the students who graduate — is more important than the bottom line.

One of the best career moves I’ve ever made was … coming to Widener. It’s such an exceptional university. And also when I was given an opportunity to move into higher education administration. I wondered if it was the right thing, and I took a chance to try. That was a good move.