Why Valley Forge Is Banking on Sports to Lure Visitors

The kids come to play in regional and national tournaments, and they bring their parents with them. That can add up to big bucks, say the people behind Valley Forge Sports. 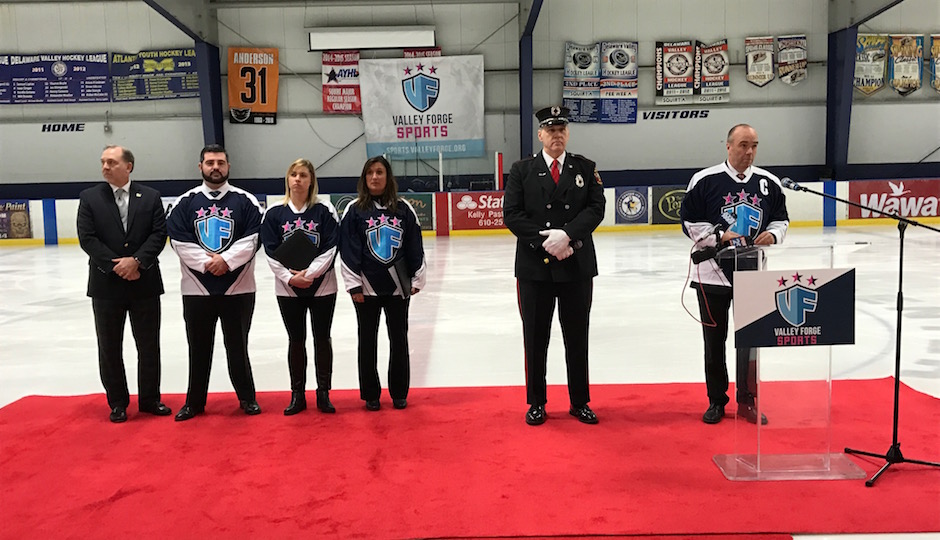 For an investment of just under $50 million plus a modest annual operating subsidy, Montgomery County hotels and restaurants could see $100 million or more pour into their coffers within five years if a new multi-sport tournament-ready playing facility is built in the county.

To get the ball rolling towards that goal, the Valley Forge Tourism and Convention Board held a kickoff news conference last Thursday (February 16th) at Oaks Center Ice to mark the formal start of raising funds and soliciting proposals for a Valley Forge Sports facility.

The facility the group seeks to build would have 92 acres of indoor and outdoor space, including an outdoor adventure facility. The indoor component would have eight basketball courts, 16 volleyball courts, two conference rooms and a café and seating area. Outside, there would be four natural grass and eight synthetic turf fields along with a zipline / canopy tour, a pavilion and parking for 1,400 cars. The facility would have the capacity to host tournaments in sports ranging from soccer to lacrosse to field hockey to pickleball. (What’s pickleball? Glad you asked.)

“This area is screaming for a facility,” said Andy Carl, sports sales manager at the VFTCB.

The Oaks facility is the reason why hockey rinks are not part of the Valley Forge Sports proposal. The two-rink facility with café and function rooms is already capable of hosting regional hockey tournaments like the weekend-long MYHockey tournament, which was set to start the day after the press conference. VFTCB President Mike Bowman noted that tournament participants and their families will spend 11,000 room nights at area hotels during the event.

Lisa Karl, vice president of sales and strategic partnerships for the VFTCB, noted that sports tourism now generates $20o billion in revenue nationwide each year, a figure that’s 20 percent greater than it was three years ago. Youth and amateur sports events like the hockey tournament account for $9 billion of that figure, and it’s that segment of the market in particular that Valley Forge Sports wants to go after.

Carl noted that the VFTCB’s sports marketing team lost out on tournaments that could deliver $100 million in economic benefit to Montgomery County over the last five years because tournament organizers either left the county for facilities they considered tournament-ready or passed over their bids for similar reasons. Citing a study the bureau commissioned from Sports Facilities Advisory that recommended getting construction of a facility under way as soon as possible, he said, “Find a site, clear the land, build the facility, and we will fill it.”

And the participants and their families will fill the county’s hotels and restaurants in turn. According to the VFTCB, sports tourism already accounts for 47 percent of all the room nights booked in the county each year, a figure that would only grow with a comprehensive facility. And Karl noted in her remarks that sports tourism is recession-proof: “Parents will forgo their own leisure time plans to ensure that their children can participate in sports tournaments.”

No formal timeline for raising the funds needed to build the facility, whose cost is estimated to run between $35 million and $50 million, was announced at the event, but the Valley Forge Sports promoters are sure to start beating the bushes now just as they work to lure sports tournaments to Montgomery County.