CHOP Under Fire Over Costs to Treat Croatian Cancer Patient

But is something lost in translation? “I’m proud because I’m not American,” reads one of the many comments left on the Children’s Hospital of Philadelphia’s Facebook page today. Another goes like this:

These posts are flooding in. Most are in broken English, and some are written in another language entirely. So what’s everybody so upset about?

Let’s break it down: Five-year-old Nora Situm has acute lymphoblastic leukemia. Nora is from Croatia, and her countrymen—despite Croatia’s gloomy economy—banded together via Facebook to raise $600,000 for an experimental treatment at CHOP. The day before she was scheduled to leave for America, local papers began reporting that the cost of her treatment had suddenly, inexplicably, gone up: the CHOP was asking for $237,000 more.

Or had it? The Atlantic dug in to the Croatian news report that set off the firestorm and found that the reports of the sudden $200K inflation were possibly exaggerated: “The price of Nora’s initial procedures didn’t go up suddenly,” reports the Atlantic.”That $200,000-plus figure is the estimated cost of continuing treatment over the next few years.” Huh.

It’s still a bit of a question mark, though, because the translation is haphazard at best. And the fact of the matter is, these angry posts and comments have been rolling in on CHOP’s Facebook page all day. Despite requests, the hospital has neither confirmed nor denied the reports but indicated, reports Philly.com, that it would have a response at some point today; as of this writing, CHOP hasn’t said a peep.

One more twist: A recent comment left on CHOP’s Facebook page claims that Croatia has raised the additional $200,000 necessary to pay for Nora’s medical bills.

We’ll update this post with CHOP’s response when it’s available.

Statement of The Children’s Hospital of Philadelphia Regarding International Medicine

Philadelphia, PA – Feb. 5, 2013 –CHOP treats thousands of children each year, from throughout the region, the country and the world and cares about the health of all children.  We know how invested the family, friends, and the community at large is in ensuring CHOP provides the best possible care for all of its patients.

While patient privacy prohibits us from commenting specifically on any individual’s medical condition without consent, we want the public to understand the pricing protocols we follow for all international families.

How the International Medicine Process Works:
·       CHOP’s process estimates the costs of treatment in advance and seeks payment at the time treatment begins.  Additional follow-up clinical treatments are sometimes necessary and can be administered over several years, either at CHOP or back in the patient’s home country.  CHOP does not charge for this follow-up clinical treatment at the time of initial treatment.  If the child is not further treated at CHOP, CHOP will never charge for the follow-up treatment.  However, CHOP does explain those potential costs to patient families at the outset so they understand the financial issues they may be facing.

·       We try to ensure that all international families understand the difference between the initial costs of treatment charged by CHOP, which does not change, and the potential future costs which will depend on future clinical treatments. 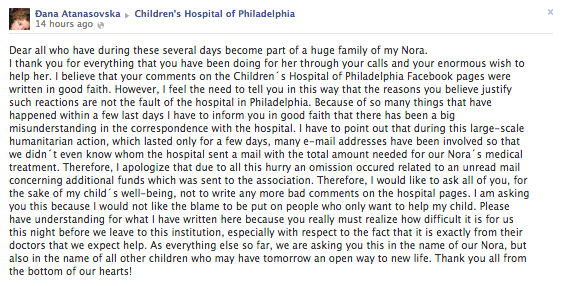