Sure, you get free drinks at the blackjack table. But by the time your waitress returns with your watered-down cocktail, you've blown a hundred bucks. In the Borgata's horse-betting lounge (how retro!), a $2 wager gets you a drink ticket (you may have to ask for it) good for most top-shelf liquor, including normally $10-a-shot Patrn. And by the time your (hopefully winning) race goes off, you'll be ready for another bet and another round. Even if you lose all your bets, you're only paying $2 a drink plus tip. Try scoring that deal at Churchill Downs. 1 Borgata Way, Atlantic City, NJ 08401, theborgata.com.

This cavernous steakhouse feels like it hasn't changed since Truman was in office and yes, we mean that as a good thing. A throwback in the style of the old Zaberer's in North Wildwood, it has a basic salad bar (iceberg and bacon bits) that beckons; a luscious, fatty rib eye that comes with jus to spare for the huge foil-wrapped baked potato; and no-nonsense waitresses who don't flinch should someone at the table ask for his meat medium-well. The Pub's got ambience and steak (and onion rings!) in spades all for a third of the cash you'd drop at your typical Center City steakhouse. 7600 Kaighns Avenue, Pennsauken, NJ 08110, thepubnj.com.

This cool, new and very popular addition to the East Passyunk restaurant scene offers excellent Malaysian food and a killer coffee service. The one thing it doesn't have? A bar. So the pro move here is to bring a bottle of vodka, ask for a tall glass of ice and a shot of Ribena (a black-currant cordial that, when drunk straight, tastes like the decorative soaps in your grandmother's bathroom), and then just thank us later. Because nothing goes better with a plate of goat satay and some coconut-sweet chicken kurma than this DIY cocktail. 1837 East Passyunk Avenue, East Passyunk, Philadelphia, PA 19148, facebook.com/SateKampar.

Though this Lehigh County property bills itself as a country inn, Glasbern is far more luxurious and refined than any you've probably been to. Opt for the two-level, $200-per-night-and-up Garden Cottage Suite, which offers all the comforts and amenities you could possibly want plus cathedral ceilings, two wood-burning fireplaces, and a private deck with pastoral views. It doesn't hurt that the on-site restaurant is producing some of the most sought-after food in the Lehigh Valley. (Score: breakfast is complimentary.) 2141 Pack House Road, Fogelsville, PA 18051, glasbern.com. 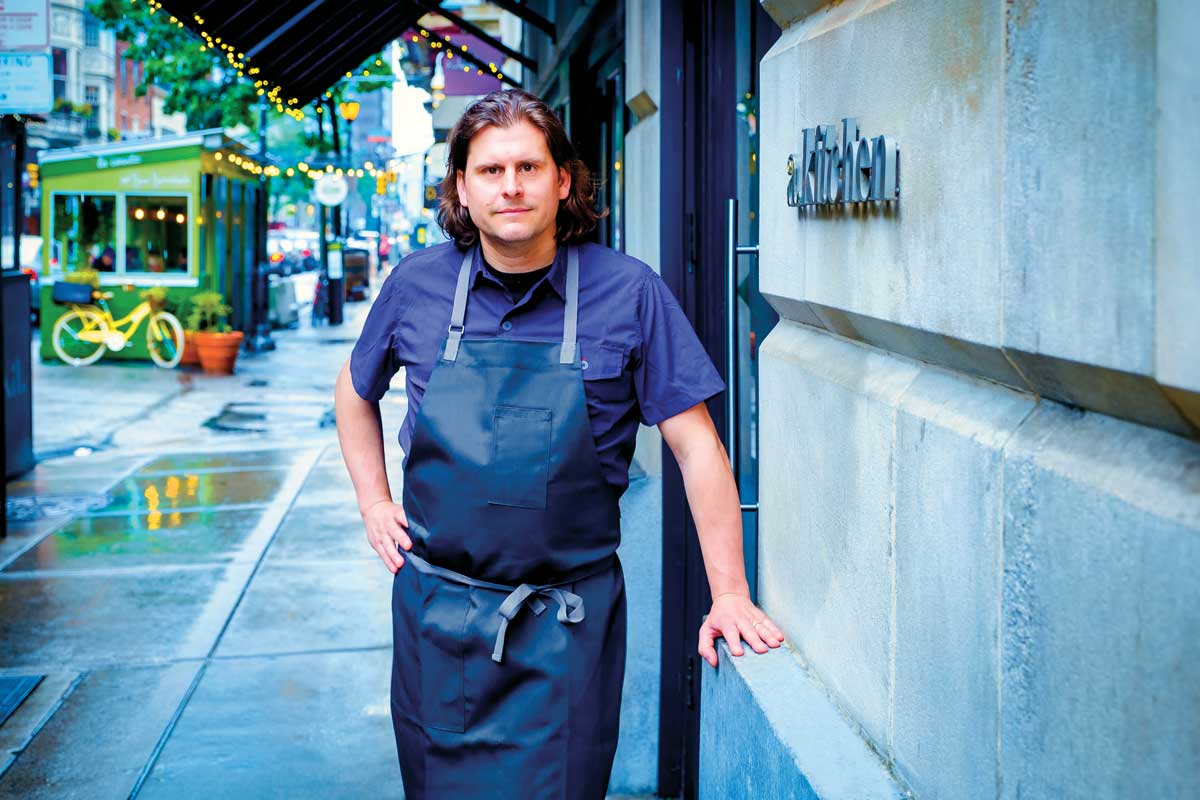 In a restaurant world roaring with egos (excuse us, personalities), Collins quietly lets his food speak for itself. Since 2017, A.Kitchen’s executive chef has been flexing his talent and imagination sub rosa, evolving new recipes and techniques for his ever-changing menu at this Rittenhouse cafe. You can see it in the smallest details: the dab of made-from-scratch date mustard that comes with the chicken liver terrine, the delicate tortellini hand-filled with chevre from a local farm, the mussels with broth built from ramps and pickled long hots. What’s missing from the menu is any shred of ego. Instead, every dish gets to be the star. 135 South 18th Street, Philadelphia, PA 19103, akitchenandbar.com.

Trendy places like Thirsty Dice and Queen & Rook are where you go when you want to hang out with your friends, have a beer or latte, and casually play some board games for an hour or two. Well, Redcap’s isn’t trendy. There’s no cafe. The store just recently upgraded from folding chairs. But what it does have is a hard-core dedication to providing an inclusive environment for serious tabletop gamers, whether your jam is Magic: The Gathering (tournaments every Friday!) or far more complex endeavors that make lesser players’ heads hurt by page two of the brick-thick manual. 3850 Lancaster Ave, Philadelphia, PA 19104, redcapscorner.com.

What began as swirly stress relief has become a creative career for this West Philly artist. Her emotional pieces have simple silhouettes drawn in colored lines and squiggles that never touch yet all come together cohesively. Her preferred drawing instrument? The Sharpie. “You can see those perfect details, the shape of the body, the curve of the hair,” says Spicer, who’s also a full-time photographer. Her first exhibit is via Fitler Club’s artist-in-residence program; those of us who aren’t members can browse her work online. lovesickartgallery.com.

There's a reason why when you cross the border into certain distant exurbs, every other car on the road is sporting a trunk magnet with the double-R logo of Railroad Street. This place has everything you want in a great beer bar -- a dozen-odd rotating taps, a huge bottle list packed with weird stuff, a staff that actually knows about all that weird stuff, some salty things on a menu that's better than it needs to be, and a back room filled with vintage pinball machines to play when you're drunk. 36 Railroad Street, Linfield, PA 19468, railroadstreet.com.

We absolutely did not need any more “New American” restaurants in this town. Mostly because that description means, essentially, nothing these days — it’s a semantically null phrase most often used for restaurants that don’t really know what they are. But Texas chef Randy Rucker knew exactly what he was doing when he brought River Twice to East Passyunk — opening a deeply personal spot that features modernist impulses, house-made pickles, butter beans escabeche, and his mom’s recipe for bread dumplings. In its moment, it was as idiosyncratic as it was startling, as welcoming as it was delicious, and while it pivoted to takeout during the unpleasantness, we’re hoping hard to see it open again one day soon. 1601 East Passyunk Avenue, Philadelphia, PA 19148, rivertwicerestaurant.com.

Running a family-friendly dining spot is harder than it looks: Cater too much to the kids, and parents want to blow their brains out; cater too much to the parents, and parents still want to blow their brains out (because if the kids ain't happy, ain't nobody happy). This neon-bright '50s-style Mount Airy spot gets the blend just right: The kids' menu (which comes on an old-school Viewmaster cool!) offers up crowd-pleasing kid fare like chicken nuggets and mac-and-cheese, while the regular menu has enough ambition and variety (including great veggie options, like an eggplant grinder) to make grown-ups happy, too. Mom-and-dad bonus: great craft beers and boozy adult milkshakes. 7619 Germantown Avenue, Philadelphia, PA 19119, trolleycardiner.com.

If you were traveling abroad when the coronavirus landed in the U.S., there was good reason to panic. Fear of spreading the virus brought international travel to a sudden halt, making returns to North America nearly impossible. Just when things couldn’t look more bleak or uncertain, there came the tiniest glimmer of hope from the least-expected source. Eastern Airlines, a small Wayne-based carrier (think 10 planes and a staff of about 200), came to the literal rescue. Through careful coordination with the State Department and local officials, Eastern organized rescue flights, and to date, they’ve flown nearly 24,000 once-stranded American citizens from Central and South America back to the States. goeasternair.com.