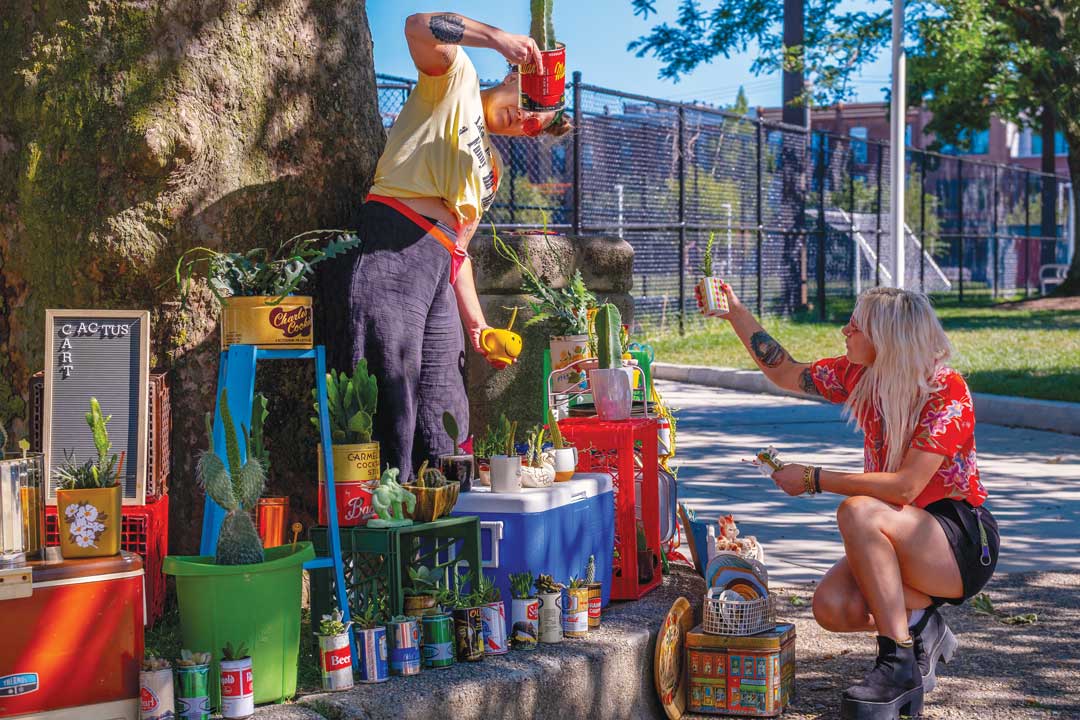 There’s nothing more Philly than a couple of punk kids rolling around town with a cart full of cacti, just like rag-and-bone men of yore. The Cactus Cart pops up on weekends at varying corners of South Philly, and the offerings are just what you need to spruce up your space: vibrant, spiky succulents planted in retro sugar cannisters and old beer cans. Plus, the cacti come in all shapes and sizes to fit on any windowsill or bookshelf. instagram.com/cactuscart2020.

In the wake of the debut of the Halston miniseries on Netflix, Katy Kane — the shop’s owner and an Antiques Roadshow appraiser — sold out of the ’70s designer’s looks in 24 hours, drawing interest from here to Hong Kong. She finds her pieces through private house calls; browse her proverbial closet online, then visit her appointment-­only studio in New Hope. Recently acquired: designs from Jackie Kennedy favorite Sybil Connolly. 1stdibs.com/dealers/katy-kane.

Musicians love to play for other people, but once bars and music venues closed, that wasn’t exactly possible. Enter the Facebook group Delco Quarantine Open Mic, which quickly grew to more than 14,800 members — many from Delco, but plenty from other areas, too. The page hosts several shows a week and features some seriously talented people who might make you think about pulling that old guitar of yours out of the attic. facebook.com/groups/524677775121227.

Philly will get its first-ever board-game cafe when the delayed Thirsty Dice opens in Fairmount, hopefully sometime this fall. For now, the Thirsty Dice crew hosts monthly pop-ups at Fishtown’s Evil Genius brewery. (The next one’s on August 8th.) They bring the games, and they’ll sit with you and your friends to explain the rules ... and to referee when needed. Because when you’re drinking, who really wants to pull out the instructions? thirstydice.com/.

Yes, Carolyn is sweet and patient and comes with a bag of tricks for the kids, but no one would get into family photography who wasn’t and didn’t. It’s really her work that makes her so sought-after—photos that capture casual, authentic moments in cool city settings (historic alleys, old park steps). Worth every penny. Carolynclementphotography.com.

The owners of Jason’s say they’re like a grocery-store sushi counter except that they use fresh fish. That about sums up this quirky, tiny spot that’s so fast and polished, you’d think it was a chain. While it’s mostly takeout, we’ve seen some Main Line moms commandeer the few tables for girls’ nights out—prosecco in hand, of course. 40 Rittenhouse Place, Ardmore, PA 19003, jasonstoridasu.com.

There’s something about rustic French cooking that’s just so comforting. It could be the simplicity in a cuisine built on rigid rules and regulations. Or maybe it’s the sense of calm that comes from recipes perfected across generations. And in the hands of chef Martin Gagne, in this 300-year-old farmhouse/24-seat prix-fixe BYOB, you taste all of that and more. 1470 Old Ridge Road, Coventryville, PA 19465, martinskitchen.com/wp/cuisine-du-marche/.

The park—just an hour from City Hall—sits in the largest chunk of forest between New York and D.C. and has 35 miles of trails, two lakes for fishing and boating (rentals available), a vast swimming pool, and disc golf and orienteering courses. As for the sleeping arrangements, if pitching a tent is a bit too rustic, modern cabins and even some yurts are available to rent. 843 Park Road, Elverson, PA 19520, dcnr.state.pa.us/stateparks/findapark/frenchcreek/.

The tickets are cheap (rarely more than $10) and it’s BYOB (no pesky drink minimums), but those are only a few of the reasons Good Good is most definitely not your Uncle Mort’s laugh house. While some of Philly’s best stand-up comedians are featured, there’s also innovative programming like Weeding Out the Stoned, in which the audience tried to guess which performer wasn’t high. 215 North 11th Street, Philadelphia, PA 19107, goodgoodcomedy.com/.

Let's start with the facts: It's a putt-putt course in a warehouse in Kensington. It's BYOB. It's 13 holes. It's decorated with ephemera that was around before Caddyshack was in theaters. It's got arcade games from the '90s and is open until 1 a.m. If your date doesn't find this the least bit amusing, it's time to call it a night. 161 Cecil B. Moore Avenue, Philadelphia, PA 19122, keystoneminigolf.com/.

The cutest footwear we've ever seen comes from Mason Dixon, a collection of kids' booties and derby shoes by Fishtown's Heather Holiday. Hand-cut leather laces, hand-sewn soles, whimsical color pairings and adorable styles make you wish she made them in adult sizes. (Wish granted: She finally does.) Philadelphia, PA mason-dixon-made.myshopify.com/.

We get it. You want to eat healthy, but the world is just full of delicious things that are so, so bad for you. Here's what you do: Lie to yourself. Go to Front Street Cafe and tell yourself the Buffalo cauliflower is good for you, because, you know, it's a vegetable, right? And completely ignore the fact that this cauliflower comes crisp and deep-fried, with a spicy Buffalo-sauce-spiked crust and a side of creamy cucumber-dill dressing. Look at you, health nut. 1253 North Front Street, Philadelphia, PA 19122, frontstreetcafe.net/.

Look, we know that now you can get pretty much anything delivered. What makes Caviar special is that it has allied itself with some of Philly's best restaurants, so you're not just getting any pizza/grilled cheese/shumai dumplings delivered; you're getting the best iterations thereof. And they'll bring it to you fresher and faster than any other service in town. trycaviar.com.

Steve, Jim, Pat and Geno pretty much do one thing: steaks. But Josh Kim, from the confines of a food cart the size of a shoebox, whips up everything from burgers to lobster rolls. And yet his cheese-steak is still a cut above, thanks to slices of hand-cut sirloin that are seasoned well and layered with onions that have some bite. facebook.com/spotburgers.

Allow us to count the glorious ways of this Fishtown yoga mecca: skylights in every classroom. An in-studio waterfall. Gorgeous locker rooms with showers. Amrita also has a roster of some of the city's best instructors and up to nine classes every single day. (We happen to be obsessed with Emile Sorger's Infrared Hot Flow class, but honestly, you can't go wrong.) 1204 Frankford Avenue, Philadelphia, PA 19125, amritayogawellness.com/.