Don’t expect to do a lot of working out in this workout. It’s mostly about animal rescue orgs helping puppies find homes – and puppy snuggles. Lots of puppy snuggles. Popping up at studios like Amrita Yoga & Wellness and OpenBox Athletics.

The new Tom's Dim Sum squats under a bridge on 11th Street like some kind of troll's shack in a culinary fairy tale. The treasure here? Soup dumplings as big as toads, thin-skinned, juicy and perfect in their tin basket steamers. 59 North 11th Street, Philadelphia, PA 19107, tomsdimsum.com/.

Need some motivation? How about a pile of cuddly puppies waiting for you at the finish line? That's what you'll find at this October race at the Navy Yard, which is put on by the Monster Milers and raises money for dog rescue and adoption. Rescuerun5K.com.

There's a reason this event sells out every August. Geeks -- especially geeks in tuxes and gowns -- are totally cool. Stroll the red carpet (or pet a snake; the event is at the Academy of Natural Sciences) with the region's top scientists, game makers and hackers -- and expect some Weird Science moments throughout the evening. Phillygeekawards.com.

Whether in his personal training studio in Center City or in the privacy of your own home, Maher, a certified strength and conditioning specialist, provides a custom exercise program, sensible nutrition advice, and, most importantly, the firm but friendly voice you need to drown out your inner "I'll just skip today" monologue. 1429 Walnut Street, Philadelphia, PA 19102, phillypersonaltraining.com/.

Sculptor Esherick's former home is now a please-do-touch-the-art, worth-the-advanced--reservation gem (without the bitter Barnes neighbors), and it displays more than 200 of his works mostly wood furnishings that haven't been moved since the artist's death in 1970. $12 for adults; $6 for children. 1520 Horseshoe Trail, Malvern, PA 19355, whartonesherickmuseum.org/.

Our favorite Philly funnyman, Doogie Horner, and his comedic friends go at it full-throttle every second or third Wednesday of the month upstairs at Fergie's, where the bar's namesake is known to get in on the action ... after a few beers. It's free and hilarious, so show up early if you plan on sitting. 1214 Sansom Street, Philadelphia, PA 19102, ministryofsecretjokes.com/.

Some people were surprised to learn that this new Center City spot is pairing pressure-fried chicken and champagne, but it’s been a thing, and one taste of the sharp bubbles cutting through the rich bird will convince you we’ve long deserved this brilliant concept. 2005 Walnut Street, Philadelphia, PA 19103, barpoulet.com.

Though still very much in start-up mode, PackagePost connects you with a nearby business that will keep boxes safe while you’re not home. Don’t yet see your ’hood in their area of service? Make a request via their website. mypackagepost.com/. 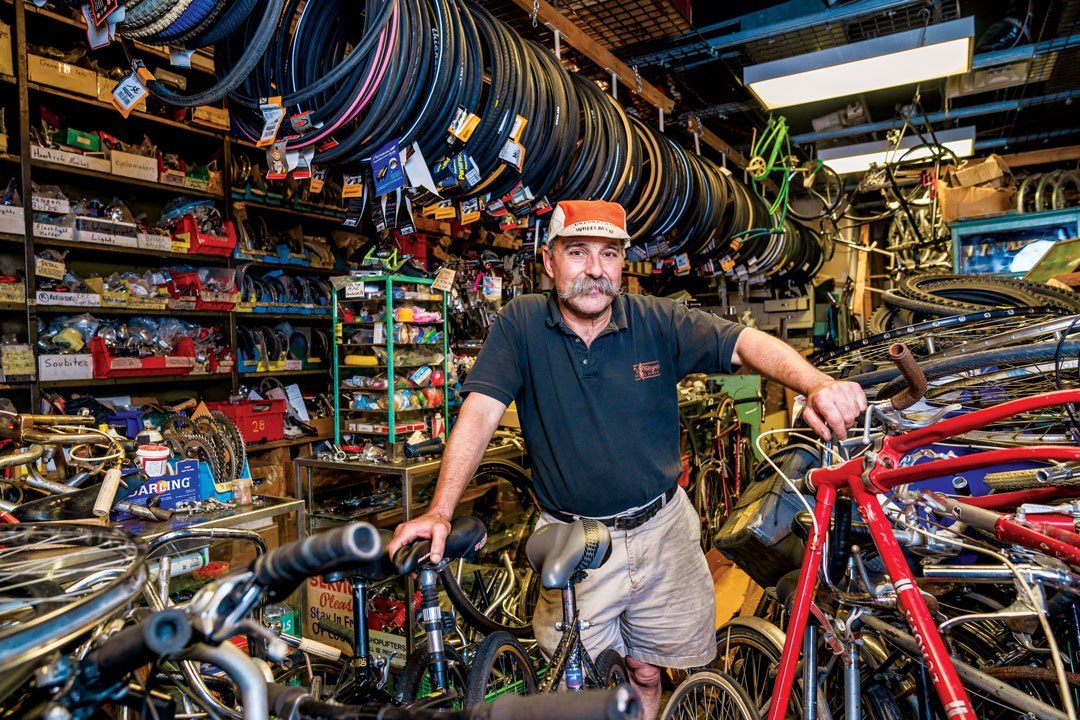 Curtis Anthony of Via Bicycle. Photograph by Jeff Fusco

Curtis Anthony’s shop looks like your granddad’s garage, and it has bikes and parts older than your granddad. (Some date back to the 1890s.) And Anthony won’t try to sell you $700 in new gear if a $7 part will do the trick. 622 South Broad Street, Philadelphia, PA 19146, Bikeville.com.

What’s grosser: cockroaches laying siege to your house, or the chemicals used to kill them? If your answer is “All of the above,” you’ll be beyond thankful for these West Chester-based pros who rid your home of pesky vermin in the most environmentally friendly ways possible. (And they’ve got a guarantee.) greenpestsolutions.com/.

It’s not all Harvard and Hopkins: Founder Meghan Leahy homes in on your children’s strengths, weaknesses, interests and goals in order to get them into a college that most suits their needs. Along the way, she’ll teach them skills – independence, time management – to thrive on campus once they get in. 50 East Wynnewood Road, Wynnewood, PA 19096, leahylearning.com/.

The Market at DelVal