Philadelphia natives Don and Kate Applebaum spent seven years in Louisiana before bringing their N'Awlins specialties back home. We're sure happy they did. Fridays and Saturdays, the longest lines at the Booth's Corner Farmer's Market are at Cajun Kate's, where Don's in charge of the gumbo (shrimp and sausage, duck, or slow-roasted pork, depending on the day) and Kate provides the sweets (fresh-from-the-fryer, dredged-in-powdered-sugar beignets). 1362 Naman's Creek Road, Boothwyn, PA 19061, cajunkates.com/.

The only thing that beats a farmers market is having one delivered to your door. Owners Pam Nelson and Mary Ann Ford work with 60-plus local farmers and food artisans to bring weekly deliveries of fruit, veggies, meat, dairy and pantry items to homes throughout the Philadelphia area. Order through the website, pay a delivery fee (up to $10), and get homegrown goodness on demand. 305 Windermere Avenue, Lansdowne, PA 19050, harvestlocalfoods.com/.

The Dogfish Head Experience in Lewes

Lewes, Delaware — a.k.a. “that town on the other end of the Cape May ferry” — is actually a charming beach resort that boasts the beer-centric Dogfish Inn. From there, you can pedal (on free Dogfish Head loaner bikes) to the Dogfish Head Brewery, where you’ll try exclusive Dogfish Head beers, and to Dogfish Head’s nearby restaurant, Chesapeake & Maine. Be sure to head home with Dogfish Head’s Compelling Gin, which has become an essential bottle in our bar. 105 Savannah Road, Lewes, DE 19958, dogfish.com/inn.

The Neon Museum of Philadelphia 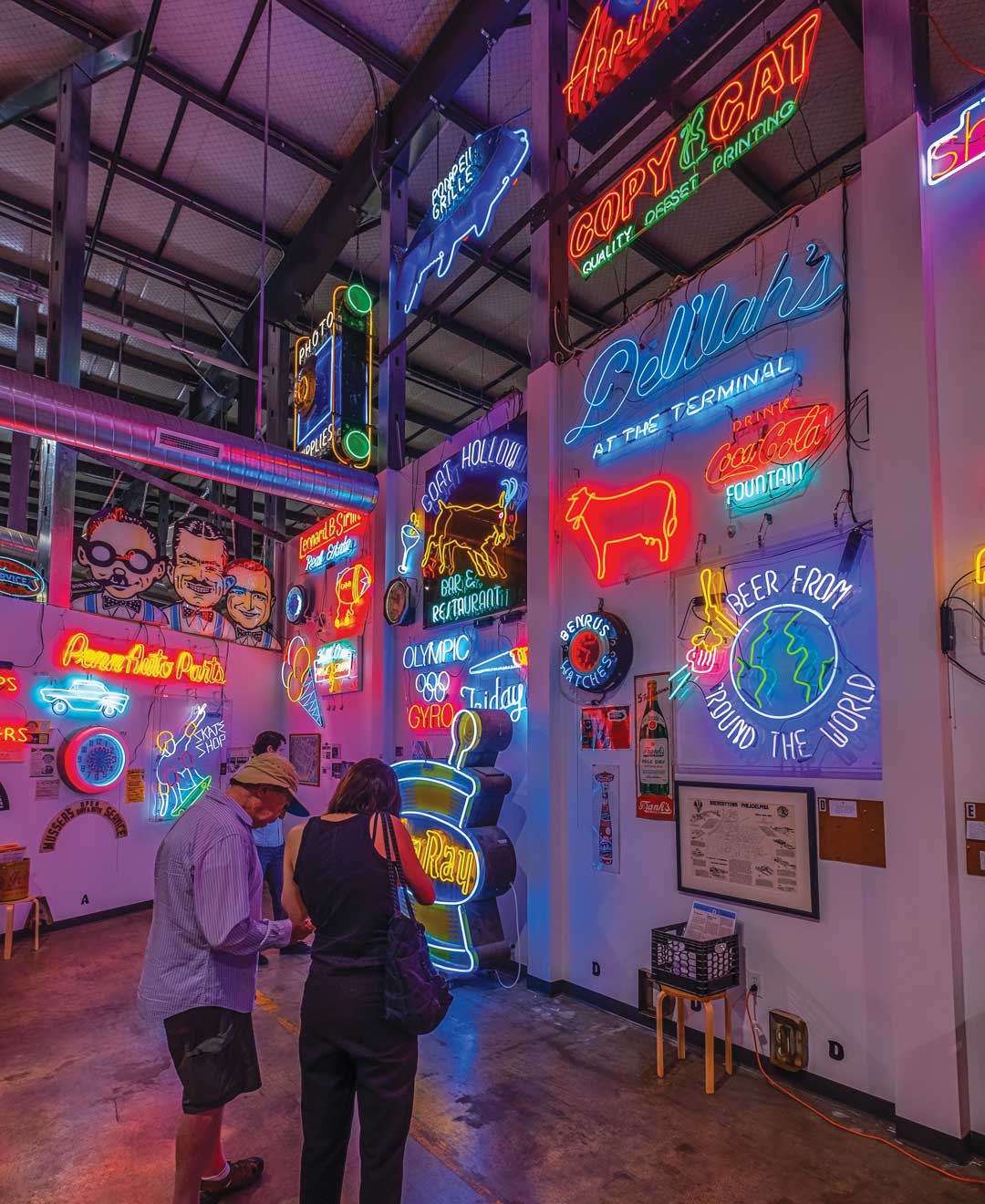 Inside the Neon Museum of Philadelphia. Photograph by Jeff Fusco

Musicians love to play for other people, but once bars and music venues closed, that wasn’t exactly possible. Enter the Facebook group Delco Quarantine Open Mic, which quickly grew to more than 14,800 members — many from Delco, but plenty from other areas, too. The page hosts several shows a week and features some seriously talented people who might make you think about pulling that old guitar of yours out of the attic. facebook.com/groups/524677775121227.

If being at home with your kids 24/7 has changed your attitude toward screen time, it’s okay. Allay your guilt (if you still have any) by registering for one of the many local kids’ classes that have popped up on YouTube and across social media. See the full write up at Virtual Classes. phillyinmovement.com/virtual-summer-camp-2/.

The owners of Jason’s say they’re like a grocery-store sushi counter except that they use fresh fish. That about sums up this quirky, tiny spot that’s so fast and polished, you’d think it was a chain. While it’s mostly takeout, we’ve seen some Main Line moms commandeer the few tables for girls’ nights out—prosecco in hand, of course. 40 Rittenhouse Place, Ardmore, PA 19003, jasonstoridasu.com.

The park—just an hour from City Hall—sits in the largest chunk of forest between New York and D.C. and has 35 miles of trails, two lakes for fishing and boating (rentals available), a vast swimming pool, and disc golf and orienteering courses. As for the sleeping arrangements, if pitching a tent is a bit too rustic, modern cabins and even some yurts are available to rent. 843 Park Road, Elverson, PA 19520, dcnr.state.pa.us/stateparks/findapark/frenchcreek/.

The tickets are cheap (rarely more than $10) and it’s BYOB (no pesky drink minimums), but those are only a few of the reasons Good Good is most definitely not your Uncle Mort’s laugh house. While some of Philly’s best stand-up comedians are featured, there’s also innovative programming like Weeding Out the Stoned, in which the audience tried to guess which performer wasn’t high. 215 North 11th Street, Philadelphia, PA 19107, goodgoodcomedy.com/.

These pros scrub your home the way you know you should but never actually do, using only green products and focusing on nitty-gritty details like baseboard crevices and that gnarly space behind the toilet. They also offer the rather elusive services of eco-friendly rug and upholstery cleaning and work in both the city and select 'burbs. 1215 Crease Street, Philadelphia, PA 19125, clenzphilly.com.

Look, we know that now you can get pretty much anything delivered. What makes Caviar special is that it has allied itself with some of Philly's best restaurants, so you're not just getting any pizza/grilled cheese/shumai dumplings delivered; you're getting the best iterations thereof. And they'll bring it to you fresher and faster than any other service in town. trycaviar.com.

Opened a few months back by a couple of Starr Restaurants veterans in the former home of Molly Maguire's, Stove & Tap has already established itself as an indispensable part of the Lansdale community. This is thanks to its excellent, wide-ranging weekend brunch menu, which covers everything from peanut butter and Nutella waffles and French toast made from Parker House rolls to a solid backyard burger and cold corn soup with a crab and avocado salad. 329 West Main Street, Lansdale, PA 19446, stoveandtap.com.

Grace Wicks daughter of restaurateur and environmentalist Judy Wicks grew up in a household with a true love of nature. But that home was in West Philly with no backyard, so her family did all its gardening in pots and planters, a skill she's perfected as the owner of Center City landscaping company Graceful Gardens. Her roof decks, planters, window boxes and backyards are as artful and lush as any country courtyard. Ask her about her edible works she designed the chef's gardens for the Four Seasons. gracefulgardens.net/.

Steve, Jim, Pat and Geno pretty much do one thing: steaks. But Josh Kim, from the confines of a food cart the size of a shoebox, whips up everything from burgers to lobster rolls. And yet his cheese-steak is still a cut above, thanks to slices of hand-cut sirloin that are seasoned well and layered with onions that have some bite. facebook.com/spotburgers.