Local Boxer Maleek Jackson Shares What it Was Like Training the Rocky, the Musical Cast

Plus, the South Philly native and owner of his namesake Northern Liberties boxing gym has his own underdog story. 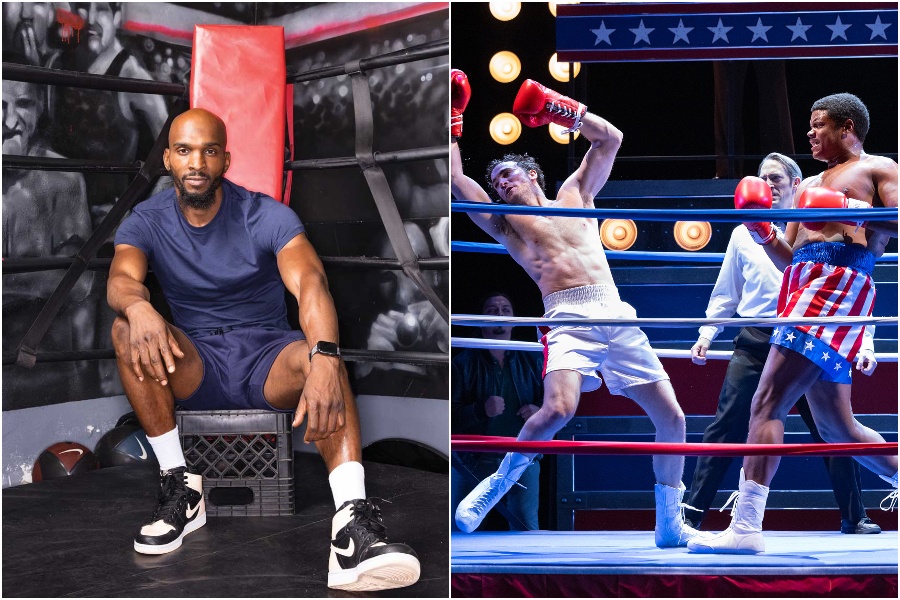 Local boxer and gym owner Maleek Jackson taught the cast of Walnut Street Theatre’s Rocky, the Musical the ins and outs of the sport. / Photographs by Colin Lenton (left) and Mark Garvin.

Rocky, the Musical officially opens tonight at Walnut Street Theatre. Like the OG movie, Rocky tells the story of a Philly underdog boxer training to defeat the world heavyweight champ Apollo Creed — with a little (okay, a lot of) romance, to boot.

The musical first debuted in New York City back in 2014 and ran for six months, but no other professional theater company in the country has put on the show since, according to WHYY. Until now, that is.

Obviously, the show features fight scenes — it is a boxing story, after all. And what better way to amplify the plot’s Philly-ness than to have an actual hometown boxer train the actors? That’s right: Walnut Street Theatre hired Maleek Jackson — South Philly native and owner of Northern Liberties-based Maleek Jackson Fitness Boxing Gym — to teach Rocky (played by Matthew Amira), Apollo (Nichalas L. Parker), and the rest of the cast the ins and outs of the sport.

We chatted with Jackson about his experience with the Rocky crew and his own underdog journey. (P.S.: You can buy tickets to Rocky, the Musical here. It closes November 6th.)

Be Well Philly: How did this opportunity come about?
Jackson: Brian Kurtas [associate artistic director of Walnut Street Theatre] lives around where my gym is located and knows the work I do in the community and throughout the city. He thought that Rocky the character and I are alike in our personal stories, and that my way of teaching would be a good fit for the musical.

How does your journey and approach to the sport (and life in general) relate to the themes of Rocky?
The story of Rocky is about perseverance and overcoming — the determination and self-belief that a person can become something bigger than their circumstances. It’s about getting back up when you get knocked down, no matter what, and embodies the overall spirit of Philadelphia, too — Philly is a fighting city.

I’ve been an underdog. My journey started when I was put in prison at 16 years old. I spent 10 years in prison, trying to overcome the obstacles of my circumstance. My goals and aspirations all revolved around what I’m doing now. When I sit back and think about Rocky as a character, I think about my own self: Prison is the lowest place in the grand scheme of life — it’s almost a step above death — and I spent a decade there. Prison can make a lot of people stop believing in their future. The thing about Rocky is that he wants to go the distance, and that’s what I strove for. My experience and Rocky’s story both get at the idea that sometimes you get your wins at the least expected times.

You’ve accomplished so much from then: A successful boxing gym, strong support for community youth, the outdoor space during the pandemic, and now consulting for a hometown musical.
Yeah, it’s amazing. It’s not my first time training actors, but it is my first time working in musical theater. You gain a different perspective when you see what goes on behind the scenes with people who are so good at their craft. I appreciate that the whole cast is like Rocky, too: They’re just trying to prove that they have what it takes to make a great show happen.

How did you approach training the actors for the musical?
I had to teach them the mechanics of boxing, like how to properly use their feet and hands, and generate power for jabs and punches. Then, we were able to create and put together the fight scenes, which had to be slowed down based on the musical, like if the referee or commentators had lines or music had to be played at specific times. That’s all new to me — syncing sound and movement — even though I have a strong understanding of rhythm. I can hear it now, “Take 3,000. Time to get it right, guys!” We had to all work together and coordinate everyone involved to find that even ground.

That seems like so many added layers to figure out, and different to how it is in the ring: Just you and your opponent.
Totally, but what I realized is really dope is that if you have enough people who are good at what they do in one room, then they can create something that is good. Everyone brings their expertise to the table in order to step up and combine worlds. It’s amazing to be part of that kind of creative process and bring a vision to fruition.

How many scenes did you contribute to, and what was your rehearsal schedule like?
I created all the boxing scenes — so basically, every fight in the show. But my overall contribution was teaching the entire cast the ABCs of boxing — the elements of movement, how to distribute your weight without losing balance — so that Rocky, Apollo and everyone involved was moving and looking like real boxers. That’s an important baseline: To have the actors perform authentic moves.

I actually started meeting with Nichalas [who plays Apollo] seven months prior [to opening]. I was at rehearsals about three days a week, and we started with the fundamentals and the confidence needed to both execute and enjoy what they’re doing. (It’s part performance and engagement/education.) As weeks went on, fights came together. And some of the actors took classes at my gym outside of rehearsals!

What lessons have you learned from boxing?
It’s a reminder that boxing is for everybody and is a gift. It’s the glue that held — and still holds — my life together. Teaching the sport and seeing others learn it puts into perspective a major life lesson: You come into this world by yourself and you go out of it by yourself. Same thing in the ring. You walk into an area filled with people, but you fight, win or lose alone. That can help someone figure out how to respond to adversity with solutions. It’s like this quote that I’ve taken to heart since I was 17: “If I know anything at all, I know a wall is nothing but a wall, and nothing more at all. It can be broken down.” If life is like a 12-round fight, then you have to learn how to control the controllables and be prepared for the hits — anything can be overcome.