The Weird Etiquette of Coronavirus Walking

When to say "hi," when to look away, when to step aside, and when to flip the bird — because socially distanced exercise has rules all its own. 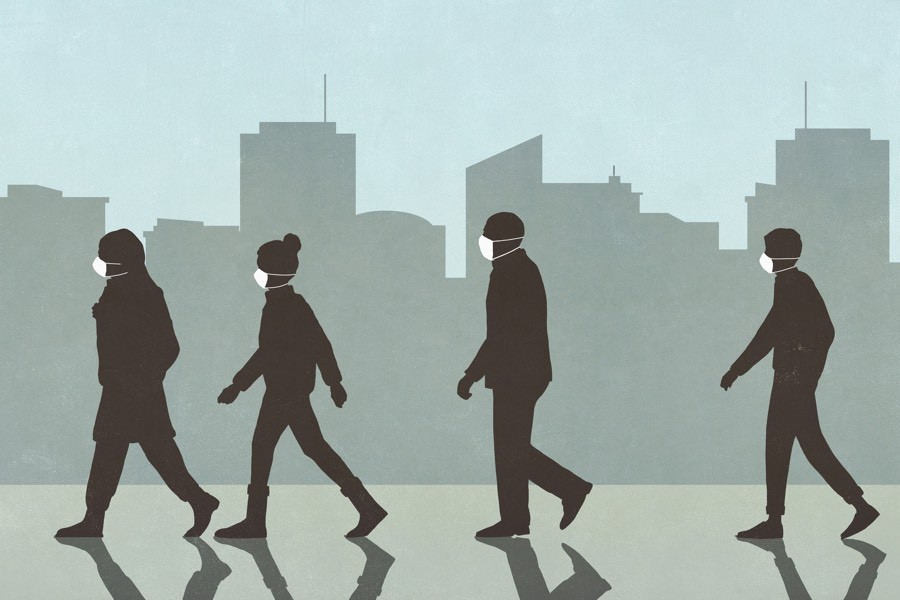 Have you mastered etiquette of coronavirus walking? Illustration by Malte Mueller, Getty Images

I was about two days into quarantine in March when I realized I was going to have to get out of my house. Mind you, it’s a perfectly nice house, in a small suburban town. There’s plenty of room indoors, plus a tiny yard. But simply moving from the garden to the kitchen table to the living room couch wasn’t going to satisfy me. I needed different vistas. And I needed more steps.

Back when we had a dog, we used to walk him around the campus of the local middle school and high school, about a block away. There’s a nice big rectangle of sidewalk that loops around the athletic fields; it’s fairly flat, and at some point, somebody landscaped the whole thing with trees and bushes — flowering cherries, crabapples, river birches, dogwoods, even peonies. It seemed logical to start walking there again and watching spring unfold.

I’m in my third month now of making that circuit twice daily. Well, almost twice daily; I’ve had some stretches of blisters, since I wore out my old sneaks and had to break in a new pair. And I have missed a few days for rain. But I’ve stuck with it, and because of my routine — one circuit in the afternoon and one in the evening — I often see the same faces as I make my rounds. Which brings up a sort of touchy point: how to acknowledge the strangers who are walking with — well, near — me every day.

Mind you, it’s not crowded at the schools, like a lot of public spaces in cities are; I see maybe a dozen people on any given outing. And it’s not that I’m looking for walking partners. (God forbid.) I’m doing this to clear my head and for exercise, neither of which is enhanced by making conversation. But when you walk past the same person day after day after day, it seems really weird not to at least say hi.

Not everyone agrees, apparently. Lots of my fellow walkers aren’t interested in so much as eye contact. But the new rules of safe exercising require us to maintain at least six feet of distance (though I prefer 12 myself). And when two socially distancing people are walking toward each other on a four-foot-wide sidewalk, some coordination is involved. One of us has to move, either onto the grassy field or out into the street.

I’ve come up with some internal rules for deciding who moves. If the person coming toward me is accompanied by children (usually on bikes) or is pushing a stroller, I head for the street. Same with folks walking dogs, since the pups are usually snuffling in the grass anyway. If I’m being approached by a pair of walkers, I’ll move, figuring it’s easier for one person to step aside than for two to have to. Otherwise, I sort of expect the general rules of politeness to be observed: If you’re young and fit, you should take the extra steps instead of old, gray-haired me. Naturally, this doesn’t always work, since, as my driver’s-ed teacher used to say, you can’t seize the right of way; you can only yield it. Occasionally, such a face-off turns into a game of chicken, in which case I’m happy to prove how very chicken I can be.

But those are the one-offs. What I find more interesting are the fellow walkers I encounter repeatedly. My favorite — or least favorite — is a woman about my age and size who, whenever we pass one another, chirps out: “Good for you, girlfriend! You’re my inspiration! When I see you out here, I just tell myself, well, if she can do it, so can you!” I’m … not sure what she expects my reaction to be. After the third or fourth instance of this, I told my husband about her and said wanly, “I must be in even worse shape than I think I am.”

About half the regulars on my circuit are wearing masks right now. The more serious among them just nod or give a brisk wave in greeting. Others say hi, or smile, or remark on the weather, which, lately, has made it easy to come up with comments like, “Man, this wind!” or “Sure would be nice to see the sun!” There’s a fine line to tread in such brief but repeated encounters; you don’t want to presume, or use up too much breath, but it’s only human to acknowledge another’s presence, right? Then there’s the whole conundrum of what to do when you’re lapped by another walker or, more often, jogger. You’ve already nodded or made small talk once; what do you do on your second and third go-round?

I’m pleased to report that at least along my walking circuit, we seem to have come up with some general rules of conduct without ever jointly saying much more than “Hi” to one another. If moms accompanied by kids apologize for said kids barreling into your space, it’s de rigueur to tell Mom it’s okay. Under no circumstances should you give her the side-eye, much less the finger. Christ, she’s home all day with little kids; isn’t she suffering enough? On the other hand, it’s perfectly acceptable, though perhaps not wise, to give the finger to any jogger who spits or sweats anywhere near you. This isn’t the 14th century; we know how pandemics spread. Some acknowledgement of any passing human is preferred, but I’ll respect your choice to ignore me if that’s how you want to play it. Just don’t come crying to me if you then lose your cell phone while romping with your dog and want me to call it for you (which actually happened the other day).

I think I’ve been pondering all this lately because except for trips to the grocery store every two weeks, these walks are my only excursions. Other than my (still going into his job) husband and the occasional neighbor, most days, fellow walkers are the only human beings I see. That means they take on an importance far exceeding the quality or duration of our interactions. We’re like Tom Hanks and his volleyball in Cast Away; they’re all that tether me to reality. I want to do right by them. I want them to like me. I want, like Hanks, to maintain some semblance of civilization while it seems to be crumbling around me. Purple sneakers lady, red Phils t-shirt dude, chattering athleisure duo, West Chester U. sweatshirt guy … we’re all brothers in arms — er, in feet — these days, doing what we have to, just trying to hang on until this all ends.