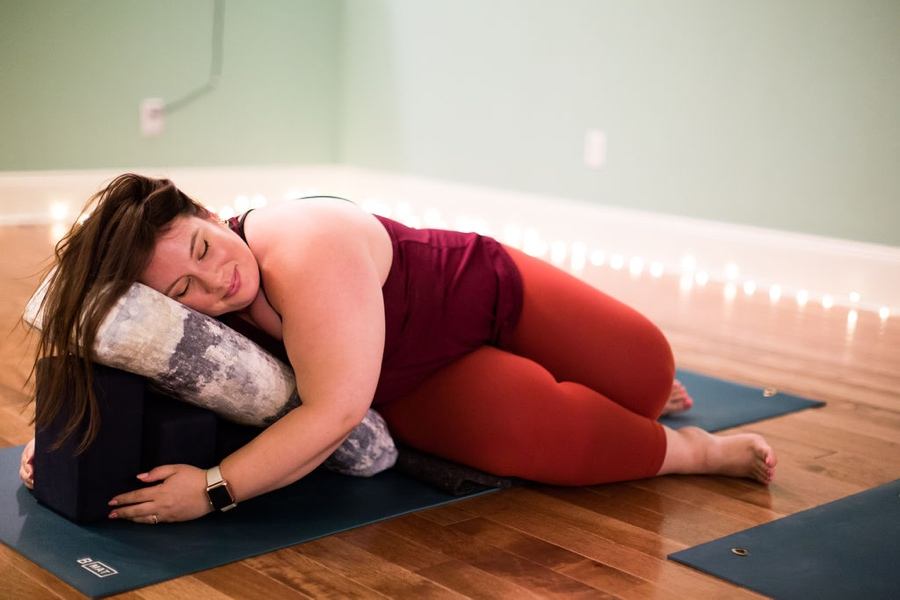 Who I am: Larkin Silverman

What I do: I co-founded and teach at Lumos Yoga & Barre in Fairmount.

“Pregnancy was a scary thing and an unanticipated thing because I have polycystic ovarian syndrome. The medical narrative that went along with that from when I diagnosed when I was a teenager is that I was defective and I was going to be infertile. I’ve had doctors telling me since I was 19 that I might not be able to have children. So we went off birth control thinking, ‘OK, this could take years. Let’s start trying now,’ and then it just happened immediately, which was shocking.

It was even confusing to date the pregnancy because they go off your last missed period, and when you have polycystic ovaries, you don’t have a regular menstrual cycle. So the first few weeks were like, ‘Is it real, is it normal?’ It was so very exciting but bewildering and made me confront a lot of years and years of how I interacted with my OBGYN providers around this illness. Honestly, being part of a small business, if I knew I wasn’t broken and was going to get pregnant right away, I might not have started trying when we started trying. The first two years of the business was not when I was planning on birthing a baby ‘cuz the business is the baby. But here we are.

However, if I was still working a 9-to-5ish job, I feel like I would have lost my job because there were days where I just had to sleep. Running a small business, I’ve had the space to take the time that I needed. I’ve taken naps in the yoga studio. I’ve built little forts out of bolsters and blankies or slept on the benches in our lobby. Or on Fourth of July the studio was closed. I somehow magically didn’t have to teach any classes that week ‘cuz I had subbed out some, so I just slept from July 4th to July 8th. I literally don’t remember those days. That wasn’t a planned vacation. How on earth would I have done that otherwise?

It has been challenging when I’ve had to teach my classes. There were weeks and weeks and weeks where I’d be puking before and after teaching, and I couldn’t take any classes. Just last Thursday night, I was in the middle of teaching a barre class and about three quarters of the way through, the heartburn was so intense that, in my head, I was thinking, ‘Do I just tell them honestly I have to end here?’ Do I try and hold it down and wrap up quickly and make it seem like it’s a 45-minute class?’ I somehow got through it and immediately puked all over the studio bathroom.

A week before that, I walked through the door and sneezed, puked, and peed all at once in my dining room. The validating thing is, friends who’ve been through it are like, ‘That’s so normal.’ I weirdly am grateful for Instagram, too, because when I posted that story about peeing my pants in my dining room — which I thought was the most bewildering, bizarre, humbling, also admittedly hilarious experience of my life — I got inundated with responses from people who were like, ‘Oh, that happened to me, too.’ One woman said that once she was actively puking into the toilet and peeing all over the bathroom floor and her husband had to bring her pants. A very fancy corporate lawyer friend was like, ‘That happened to me in my office, and I immediately left for the day. I had to not go to court.’ That’s crazy.

The first trimester was hard not only for the physical stuff, but I don’t feel mentally myself when I’m not moving my body. It’s probably an anxiety thing — like that GIF of Rob Lowe from Parks & Recreation [“If I keep my body moving and my mind occupied at all times, I will avoid falling into a bottomless pit of despair.”] I am in constant motion to keep the voices down. But I was so sick I literally couldn’t do it. It was hard to let go of that desire to be on a walk or at the studio at the time.

The other thing I had no idea about was that aversions were a thing. I’ve had really, really profound aversions to food you would eat every day. There was a week where literally water was repellent to me. It was so bad, especially for a full-time fitness person. That entire week, I could only eat pudding cups and could only drink Juicy Juice boxes that were room temperature. I also couldn’t grocery shop because of the layer upon layer of smells I could smell. I was like, ‘I can smell all the rotten food and I’m a superhero and no one else knows.’ That’s all been challenging for trying to teach group fitness.

Usually, when I’m teaching, I’ll introduce myself and say, ‘This is where I’m at in my pregnancy.’ My mantra right now for teaching has been do as I say, not as I do. It’s made me get more creative and precise about my verbal cues. Or I, a little bit selfishly, design the sequence around me. Or I will tell them point blank, ‘I’m going to get on my back and do one rep with you. If I can feel the baby move or I’m uncomfortable, I’m standing right back up.’ That’s also a funny dynamic to be literally standing over your class while they’re in bridges or abs. It feels kind of icky, like I’m a master conductor or something, but everyone’s been really supportive.

When I’m taking most classes now, I always have to do this mental calculation in my head, like, ‘Can I modify this? How can I make it safe?’ (versus prenatal classes, where everything’s on the menu, and I can also excuse myself and go vomit if I need to and feel like it’s fine). But my body’s really good at telling me what’s off limits. Baby tells me what is and what is not OK. Last night, I did a forward fold with my barre class and I could feel the baby kicking around. I was like, ‘I don’t think the baby likes this, so I’m just going to stand up.’ I still don’t know if the moving is a good thing — maybe they’re really titillated by it and they’re having fun and they want to forward fold, too. But maybe they’re telling me, ‘I need more space, I need more space.’

I also grab all the props. Last night, I was taking myself through my barre sequence before my class arrived, and I went to the yoga room and grabbed the giant bolster and a blanket and elevated my hips on them. If I go to a non-prenatal yoga class, I always make sure I have a blanket or two, a bolster, and three or even four blocks, and I’ll just build myself towers. I take up a lot of space.

The other crazy thing is for higher-impact stuff, which I’m still having fun doing, I can’t not pee when I’m jumping now. Sometimes I have to leave and pee and then I can come back. Or if I’m not able to do jumping jacks that day, I’ll do side to side steps.

I’ve also gotten carpal tunnel from the pregnancy, which is a thing I had no idea about. As a result, modifications I would typically take — like a table top — are now a challenge. So, again, I’ll build a tower with blocks and do higher forearm planks. If I feel like I can keep my knees up in a plank, I’ll get my feet as wide as possible, almost in a big wide V shape. My down dog these days is almost like a wide-legged fold. Any hip opener feels amazing — I’m sure it’s some weird intuitive thing about getting ready for birth. If I take a yogi squat, I’ll build a tower of blocks and sit against the wall, so my shoulders are supported by the wall. If there’s a twist being offered, I keep it open, with my shoulders over my hips instead of pushing my shoulders past hips. And then if I want to do obliques, it’ll be a heel-to-heel touch versus a bicycle or a scissor. Any real twisting and wringing feels icky and baby doesn’t like it, so I don’t do it.

There’s been all of the emotions. There are definitely weeks where I wondered, ‘Should we be doing this? Can we be doing this? Am I already a terrible parent for thinking that?’ But ultimately, the minute I think about the fact that there’s a heart beating inside the place where my heart beats, I start to cry, and they’re grateful tears. I went to a gentle yoga class a few weeks ago, and the instructor had us do a body scan when we started, and I was like, ‘God, everything hurts. I feel achy. I feel crazy. My hands are swollen. My feet are swollen.’ Then, at the end, she told us to take inventory again and express gratitude. And I burst into tears. It was like, ‘Yes, my feet are swollen. But I am so grateful for my swollen feet right now because they carry me carrying you.’”