A month ago, Revel Ride decided to launch a summer studio in Avalon. Here's what they went through to make this last-minute idea come to fruition. 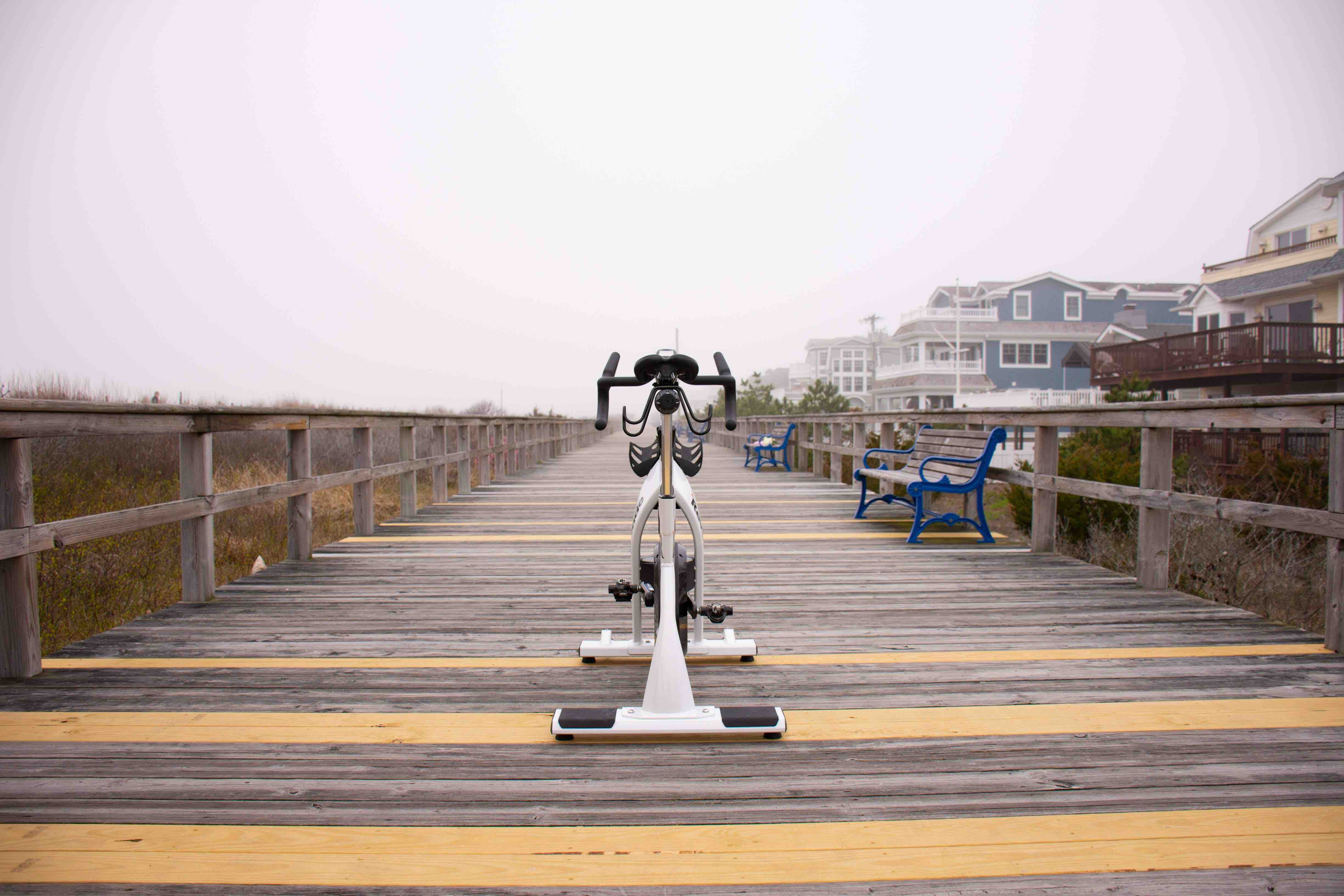 It started with a casual comment over dinner. Jamie Promislo, the owner of Revel Ride, and JJ Francis, the Graduate Hospital spin studio’s operations manager, were out at Kei Sushi, talking about what they could do over the summer to infuse new life into their boutique workouts. The obvious thought was to do as the locals do: slather on some SPF 30 and head the hour and a half or so southeast to the Jersey Shore.

But it would be a logistical nightmare. They’d need 30 additional bikes, more commitment from instructors (of which only Francis is full-time), a place to stay, and, oh yeah, a space. And it was late March. People start booking summer rental homes in November. Trying to open another location on the Shore by Memorial Day weekend — the unofficial start of beach season — would be insane.

Yet that is exactly what’s happening. On May 25th, Revel Ride, which has been open on South Street for less than a year, will launch a second studio in Avalon, New Jersey. The “pop-up” studio will only be accessible during the summer, when the Cape May County borough is full of sunbathers looking to keep up their fitness routines on vacation. (Revel Ride Avalon will likely close after Labor Day weekend, but marketing manager Ray Smeriglio says it might stay open a little longer if enough customers keep coming through September.)

Otherwise, the experience will match what indoor cyclists have grown to expect from the luxury studio, from the iPad check-in and complimentary cleats to the surround sound set-up and eucalyptus-scented towels. There will also be a coffee bar, so you can get your caffeine and your endorphin fix all in the same visit. Prices will be a little more higher than at the Philly location of Revel Ride. The classes will cost $30 for a drop-in; $145 for a five-pack, $280 for a 10-pack, $399 for a 15-pack, or $1,200, which breaks down to $12 a day for 98 days, for the entire summer, although Revel will host a discounted pre-sale running from tomorrow until opening day. (The packages have charming names — the Day Tripper, the Shoobie, the Weekender — that truly might convince us to buy a session by themselves.)

All of that, though, is simply the final glossy result of a whirlwind month, in which the Revel Ride folks schemed, bartered, cried, and sent tipsy emails in an attempt to turn a last-minute plan into a viable experience. Here’s an abbreviated version of the hustle, starting on March 30th — 48 hours after Promislo and Francis hatched this harebrained idea.

April 4th: Francis reaches out to the bike distributor in California to see what the likelihood is that he can get 25 new bikes to them by Memorial Day weekend. The guy laughs and says, “The earliest we can do is late June.” Francis says, “You’ve GOTTA find a way to do it, if we pull this together.”

April 6th: Promislo and Francis drive down to Avalon to talk to gyms about partnering and decide to go see a rental space that used to be a deli. That location doesn’t work — but there’s an empty space next door that the landlord says they “probably won’t be interested in.” It’s essentially a blank canvas, easy to adapt, and close to Lululemon and the popular Whitebrier Restaurant. (Translation: Lots of foot traffic.) It’s perfect.

They then decide to go over to the Long & Foster Vacation Rentals office to see about rental homes. (they’d need a place to live if this were to happen) and look at four different properties. Promislo texts Smerigilio, the marketing manager, who’s out at a bar back in Philly, that things are looking good, and he starts emailing to set up photo and video shoots, cocktail in hand.

April 7th: Promislo, Francis, and Smeriglio meet with the 12 other Revel Ride instructors to tell them about the possible expansion and figure out how they can teach at the Shore on top of their schedules at the Philly studio and their actual full-time jobs. Although Francis and Promislo will be shouldering the bulk of the teaching duties, everyone agrees to use a week of their vacation or work remotely, so they can help out.

April 8th: Francis gives Promislo a thumbs-up in the middle of her 5:30 p.m. class, indicating the lease on the Avalon space is good to go. She yells, “Oh my god,” but can’t explain further. Promislo begs the bike distributor to figure something out, and he says he’ll make it happen.

April 10th: Francis starts working with Mindbody to make a second location through the booking app. While in the process, the studio goes “live” online, and it’s visible to everyone on the app. Francis freaks out, starts to cry, and screams at the customer support guy for three minutes to get it offline. Fortunately, the new location was listed as a “test,” so the secret was hinted at instead of fully leaked.

April 11th: Francis drives to the Shore to meet with a contractor and design the floor plan of the Avalon space, then goes to look at two more rental houses. Since they’re booking so late in the season, it looks like they’re going to have to get five different houses and move around every couple of weeks. Questions are also starting to roll in from riders who noticed the test location online, but the crew stays quiet. 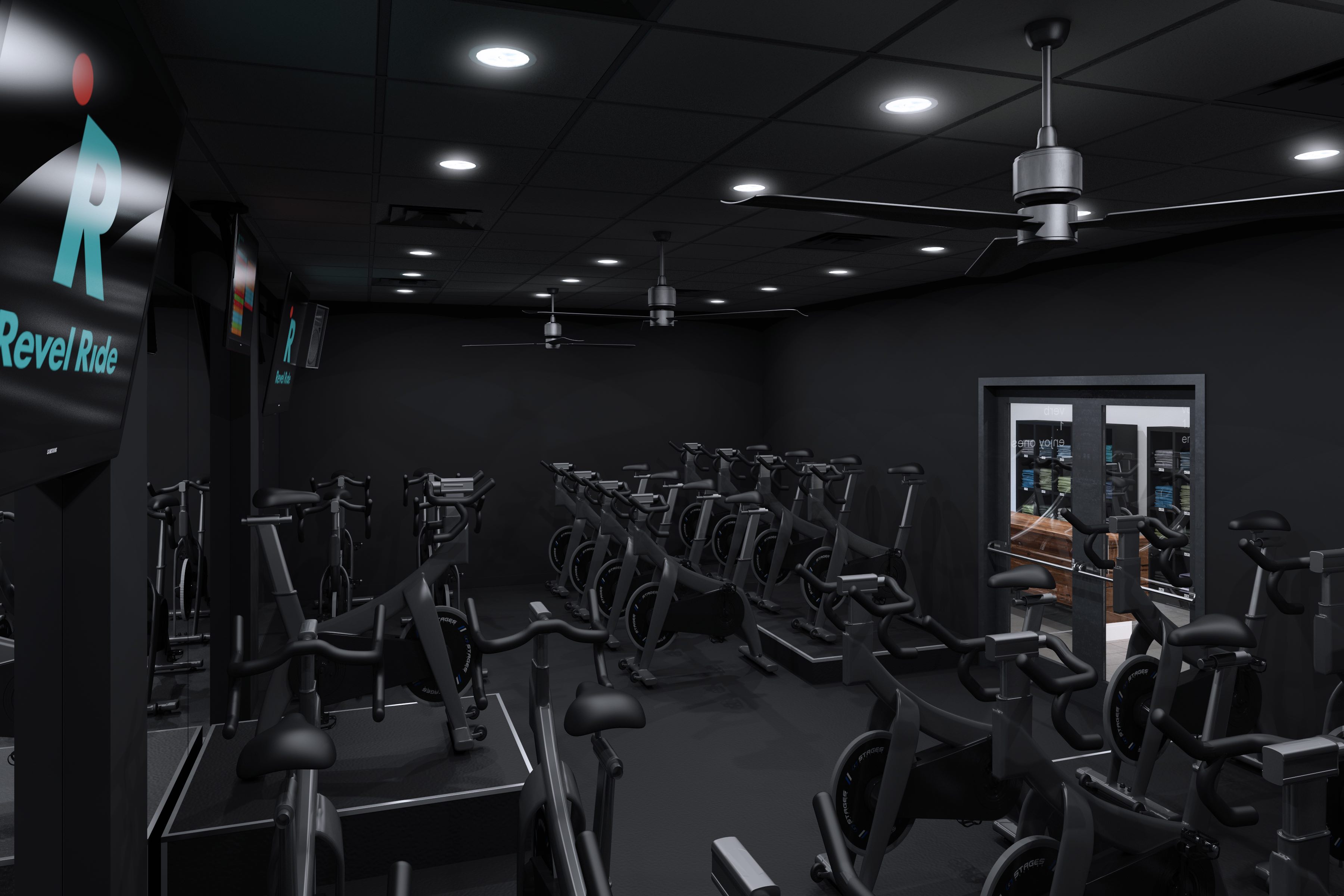 A rendering of the Revel Ride Avalon studio. / Photograph courtesy of Revel Ride

April 14th: Promislo, Francis, and Smeriglio, along with several other instructors and riders, head to the Shore for a photo shoot — drone included.

April 21st: Francis has a family emergency and immediately boards a flight to Ireland.

Week of April 22nd: Construction supplies start to be delivered to Promislo’s and Francis’ homes. Boxes. Are. Everywhere.

April 25th: The final meeting before launch weekend takes place at Promislo’s, where the video, advertising plan, budget, and renderings are approved.

Between April 29th and May 25th: A lot still needs to happen. Here’s the full list: