Here's what it was like to spend a weekend with 150 unusually happy strangers. 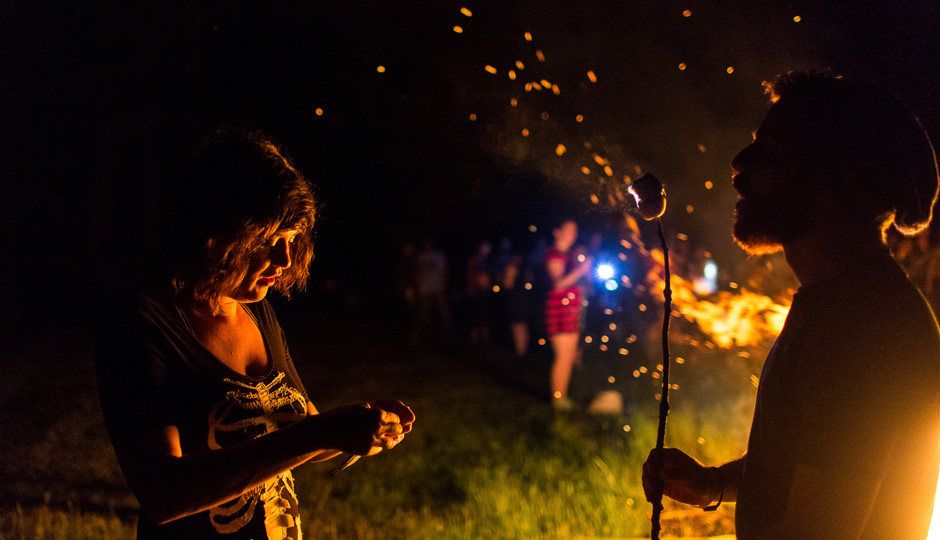 It’s around 10:30 a.m. on a recent Friday when I roll up to 30th and JFK to catch the bus to Camp Bonfire and I’m already tired. I feel exhausted from a solid two weeks of work without a break. While I’m looking forward to an unplugged weekend of outdoor fun in the woods, part of me wishes I had stayed home to lie around and watch The Great British Bake-Off and give myself anxiety attacks from reading Twitter.

Right away, I can tell who’s waiting for the Camp Bonfire charter and who’s in line for Mega or Bolt: The Camp Bonfire people are smiling and laughing and hugging. Plus they all have sleeping bags.

The bus will take us up to Lake Owego Camp in the upper right corner of Pennsylvania, in the Poconos, not far from the New York or New Jersey state lines. In July and August, its cabins, lake, climbing walls, and basketball courts will be home to a few hundred boys for two months of sleepaway camp. But this particular weekend, 120 adult campers and 30 or so counselors and staff will take it over.

That’s pretty much Camp Bonfire’s value proposition. As one verse of their camp song starts, we’re grown-ass adults at summer camp. There are no obligations to worry about: no meals to make, no errands to run, nothing to spend money on (although camp will cost you between $450 and $550, depending on how you get there). No boss, no coworkers, no kids, no email, no social media. While some campers have come with friends and a handful are there with spouses or partners, camp is a place where you can be whomever you are when no one you know is around.

At the same time, we’re grown-ass adults, and campers are expected to make the most of the weekend, whatever that means for us. While it’s never explicitly stated, talking about work or asking a new person to define themselves by answering the question “What do you do?” seems frowned upon, as is drinking irresponsibly. (This is not Camp No Counselors.) Craft beer and cocktails are provided at the nighttime bonfire and dance party and at the bourbon tasting, the activity that filled up most quickly.

Otherwise, the weekend is packed with counselor-led activities like archery, climbing, mountain biking, canoeing, embroidery, and hip-hop dance. Play ping pong or giant Jenga or Capture the Flag with foam swords or Life-Sized Hungry Hungry Hippos. Duck into the Arts & Crafts Palace to paint or make a friendship bracelet. Go on a tree-identification walk with Ben or do yoga with Shay or make fairy houses with Jesse.

Or do none of these things. Take a snooze in your bunk (for beds intended for children, they’re pretty comfortable), or read in one of the many lakeside hammocks, or walk in the woods. Although the schedule is tightly organized, plenty of the slots are labeled “free time” (veteran campers tell me this is a welcome change from the last two years), and there’s even a designated “rest hour” where the whole campground is either napping, doing yoga, or otherwise chilling hard.

Part of what Camp Bonfire offers is the chance to free yourself from technology; many campers choose, as I did, to offer up their powered-down smartphone along with other valuables for safekeeping at check-in.

If you absolutely can’t live without those likes, you can go to the Designated Technology Area — a cabin in a remote corner of the campground marked with a sign that reads “Keep the news to yourself” — and be on your phone. Just don’t do it around the other campers, who have been instructed to gently taunt violators with “beep-boop-beep-boop” noises. (The organizers make an exception for several Instamax cameras that hang next to two trees with lines of twine and sacks of clothespins; campers are encouraged to take mini-Polaroids and pin them to this IRL “timeline.”)

Instead of staying connected with the world, at Camp Bonfire you’re meant to connect with (gasp) other people.

This culture is fostered by the top-down positivity that flows from leadership down to the counselors and the campers. The co-directors, Jacob Winterstein and Benjamin Camp (yep), started Camp Bonfire because their time going to camp as kids was some of the best of their lives, and they wanted to recreate that feeling of freedom and adventure for themselves and other adults.

The three tenets of Camp Bonfire are invite, inspire, adventure. The organizers invite us to share this weekend together; we are encouraged to invite our fellow campers to join in our activities or sit with us in the cafeteria for a no-frills but tasty meal. The goal is to be open, vulnerable, to feel free, to have fun — to reacquaint ourselves with a way of being that, if any of us ever had it as kids, can prove elusive in the real world. And adventure? If swinging from a super-high rope or paddling a canoe doesn’t sound that wildly adventurous to you, the prospect of being in a remote location with 150 unusually happy strangers just might.

The counselors all seem like that person you know who, no matter what, radiates positivity and chillness and fun to such an extent that you’d totally hate them if they weren’t just so nice and cool that they can win over even your crabby, pessimistic ass. They are all, in public at least, beams of sunlight in human form who are able to summon a seemingly endless supply of unforced positive vibes.

At one point, as camp is convening, before we split off into our respective activities, one counselor says, “We believe that the epicenter of fun is inside of all of you.” At Camp Bonfire, this is a totally normal (and wonderful) thing to say.

A week later, I’m still processing how I feel about my experience — what does it say about me that I reverted back to my Twitter anxiety loop before I’d even gotten off the bus home? But when I was at Camp Bonfire, I had a really great time.

I got to know my cabin mates. I shot a bow and arrow for the first time, and it felt awesome. I learned to embroider. I won a fire-building contest on a team with five other campers. I spent most of the pool party (yes: pool party) choreographing an impromptu synchronized swimming routine with six other lady campers. I practiced wildflower identification with a fellow plant nerd, a woman from Ohio who was old enough to be my mom. I sweated my ass off on the dance floor to that Justin Timberlake song from the Trolls movie. I got deep into my feelings during Yoga for Your Inner Child.

I teared up no less than three times at Saturday night’s Talent/No Talent Show, which included spirited performances of a spot-on impression of a velociraptor, a belly dance, a heartbreaking original song about divorce accompanied by ukulele, and “You’re the One That I Want” from Grease, enthusiastically lip-synched. Several of the performers had never been onstage before, but each act, no matter how unpolished, was met with real and joyous applause.

On Sunday afternoon, the whole camp met by the lake for a closing ceremony. We took a big group photo and lit one last ceremonial (small) bonfire. Camp is a part of us now, the directors told us, and we can carry that with us everywhere we go. “When I went to camp as a kid, I told everyone it was my camp,” Ben said. “We want this to be your camp.”

They invited any campers who were so moved to say a few words. One said how much she appreciated that she was encouraged to be by herself during camp when she wanted to. (Amen.) Another stood up, saying that the weekend was the first time she was able to look into other people’s faces and see herself staring back, that we really were all one. She was in tears. She wasn’t the only one.