He's raising awareness for his nonprofit, the Firefighter 5 Foundation.

Steve Bender is not crazy. Well, maybe he’s a little crazy, but it’s the kind of crazy you can’t help but admire and hope rubs off on you just a little bit. He’s the guy who ran the Philadelphia Marathon yesterday in 50 pounds of fireman’s gear — helmet and air tank included.

But wait, it gets crazier: His 5:30 finish came just one day after completing the Annapolis Running Classic half marathon on Saturday — which, yup, he also ran outfitted in his fireman’s gear. (His finish time at that race was 2:28:19, if you’re wondering.)

I got wind of Bender’s antics by way of a thread on the Run215 Facebook group, on which several were runners singing his praises. “Saw him at 22 and he was amazing!” one wrote. “I chatted with this guy a bit up the hill on Chestnut … he was kicking my butt even with all that gear on!” wrote another.

I just had to know what this guy’s deal was. So last night I tracked him down. “I’ve run 20 marathons all together — four full and one half in gear,” says Bender, a 41-year-old volunteer firefighter at Reliance Hook and Ladder Co. in Boothwyn. “I do it to help motivate other people” — I’d say he’s sure got that one down — “and to raise awareness for my foundation.”

That would be the Firefighter 5 Foundation, which pays entry fees to races for first responders who want to participate. Bender started it back in 2013 to encourage other firemen and EMTs to be healthy and active when they’re off the clock. The cause was an outgrowth of his own story, which found him, six or so years ago, looking in the mirror at his 235-pound body and wondering, in his words: “Holy cow, what happened?”

He’d been a volunteer fireman since age 13, was athletic back in high school, and served five years in the military during Desert Storm. But somewhere along the way, things went off the rails, health-wise. “Being a first responder, I look at all the firemen around me — most are overweight, they don’t care about their health,” he says. “That’s exactly how I was.”

He started down a path toward better health with a single one-mile run. “I remember feeling like I wanted to die, but I just kept working at it, and eventually I ran a 5K, then a half marathon, then a full marathon,” he says. “I lost the weight, and my health was getting better.”

Now he puts in 30 to 40 miles each week to stay race ready. Believe it or not, he doesn’t actually train in the fireman’s getup, nor does he strap on a 50-pound vest to get used to the extra weight. “I just run,” says Bender, who first donned the head-to-toe gear during a race in Cleveland in May (pictured below) to run for a firefighter’s father who had ALS. Of course, running in all that gear has its drawbacks. For one, it’s hot. Really hot. Bender says he was more than a little toasty at yesterday’s Philadelphia Marathon, at which the starting-line temperature was around 50 degrees. Underneath the suit, he says, he wears normal running shorts and a sweat-wicking tech shirt.

The most cumbersome parts of the uniform are the helmet — it alone accounts for about seven pounds, which Bender says really takes a toll on his neck — and the air pack strapped to his back. “You can’t get it tight enough to keep it from bouncing around, and I really feel it in my butt,” he says. “It’s like doing squats for five hours.” When I asked him if he runs in boots, he laughed: “No, I wear sneakers. That would just be crazy.”

Bender runs in his firefighter gear to help raise awareness for Firefighter 5 and to motivate folks who are running alongside of him — hence, all that chatter on Run215 about the guy in the fireman’s getup who was inspiring the heck out of fellow marathoners yesterday. Running in the gear, he says, tacks on an additional one hour to his typical half marathon finish time and two hours to his marathon time, which means ends up further back in the pack — right where the people who need the most motivation tend to be.

“I like to talk to people while I run, give them some encouragement,” he says.

His next goal? Running a marathon in all 50 states. He plans to track his progress on a website that’ll launch later this month. He hopes other first responders will be inspired to join him.

And, of course, you can bet he’ll be running in all his gear. 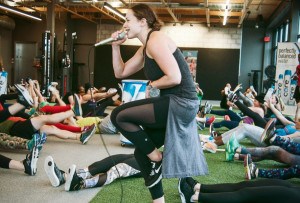 A New Fitness Series Is Coming to Philly