Check Out This Epic Engagement Shoot in an Abandoned, Graffiti-Filled Railroad Car

Yes, the couple is aware what’s behind them. 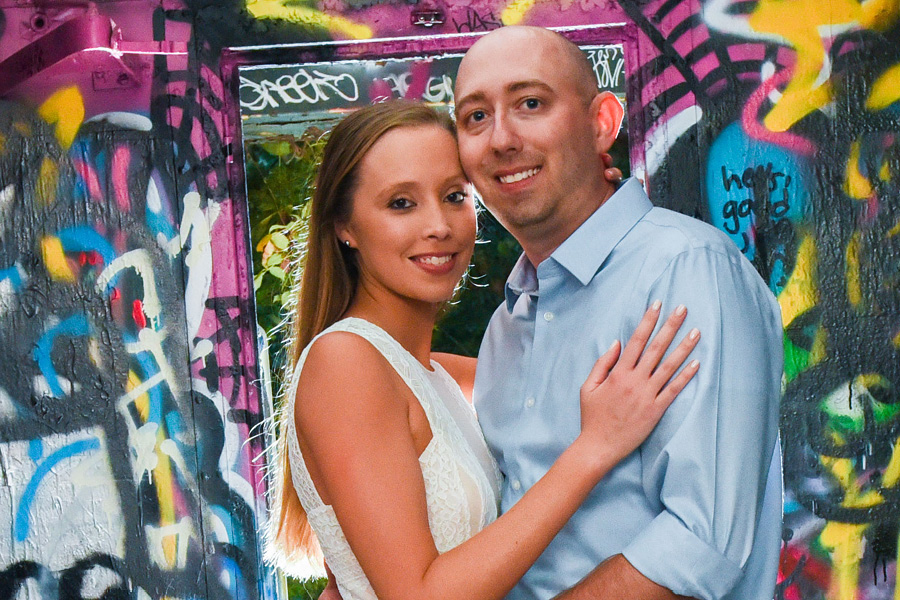 There’s something to be said for going outside your comfort zone for some — or all — of your wedding festivities, and your engagement shoot is a great place to start. Naturally, Philly folks are into it: They’ve staged date-night photo sessions or American Horror Story-themed pictures, among many other inventive ways to showcase their love stories. Then there is this couple: When photographer Rebecca Barger suggested they pose in an abandoned, graffiti-filled railroad car for their Lambertville engagement photos, they took her up on it — and, yes, they are aware that some of the art is, er, promiscuous. Here, a look at their approach. 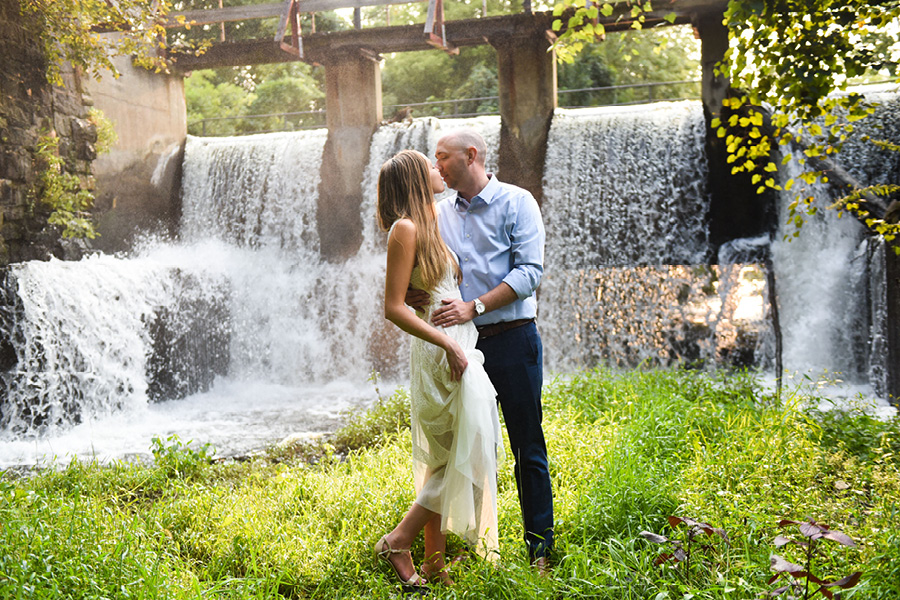 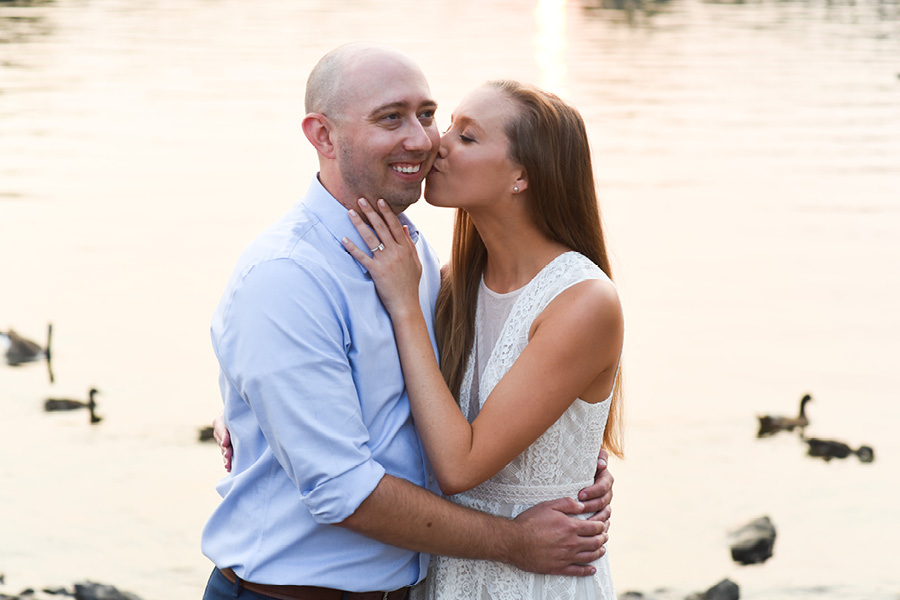 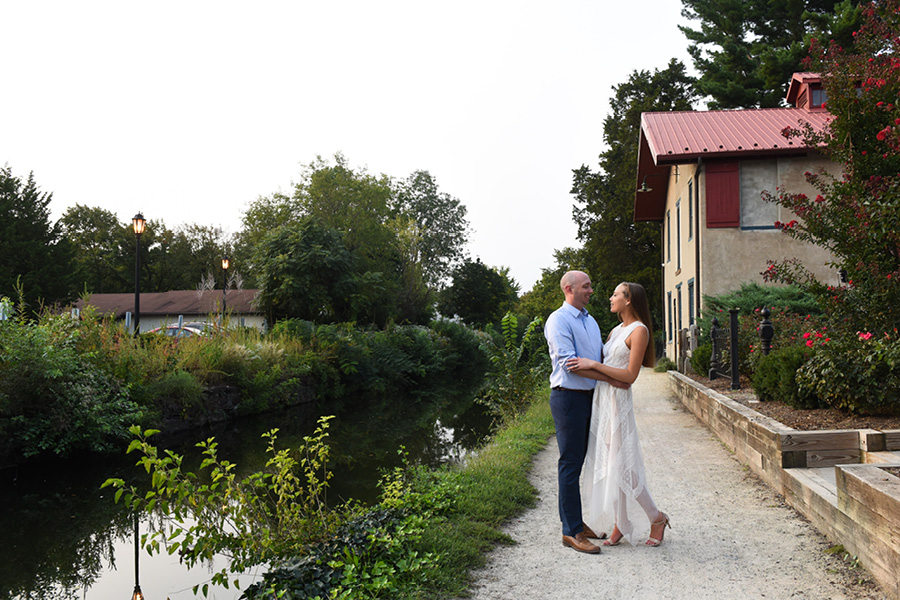 How they met: Stephanie and Dan met in what they call the “new, old-fashioned” way — online via Hinge in July 2018. Their first date was at the former Cooperage in Washington Square. Their initial plan for “just drinks” turned into a three-hour dinner — and dessert when the chef sent out the last treat for free. (He must’ve seen something special.) Their relationship developed quickly — they say that Dan’s dog, Cooper, helped seal the deal — and soon became exclusive. 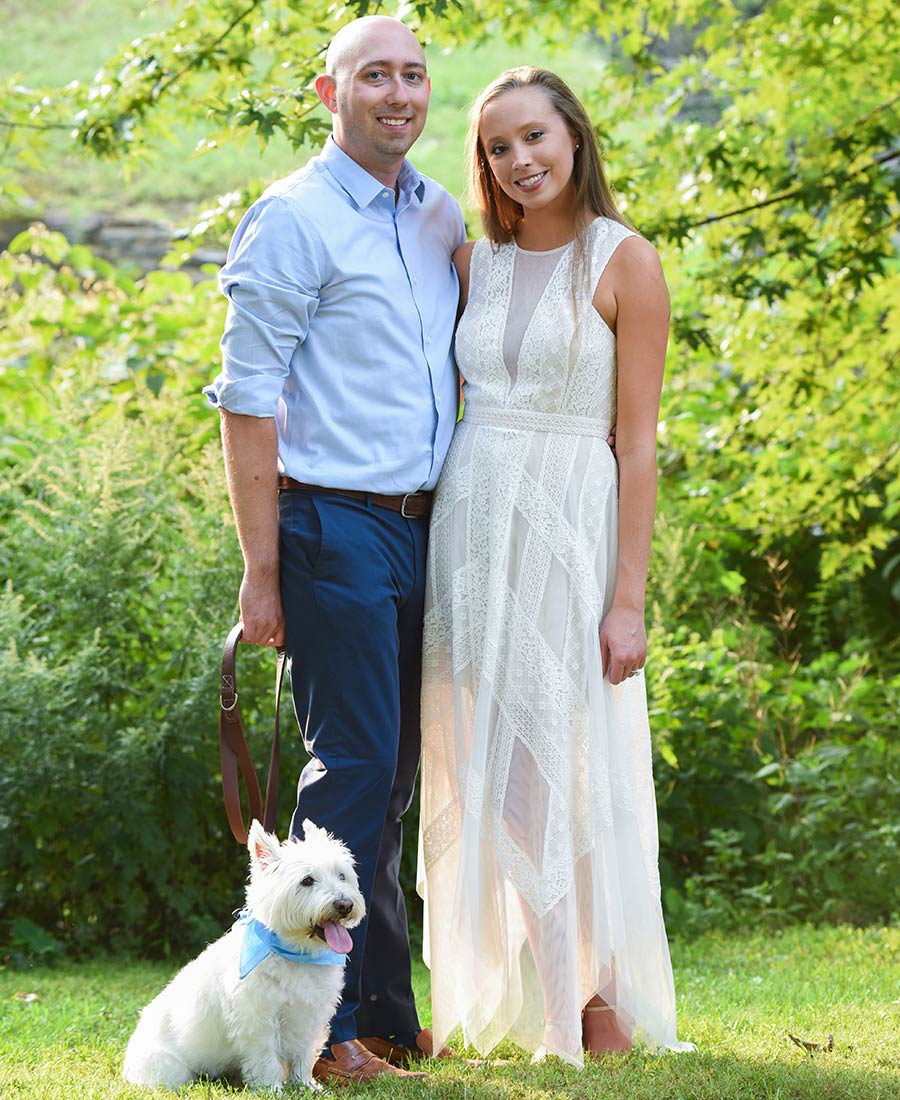 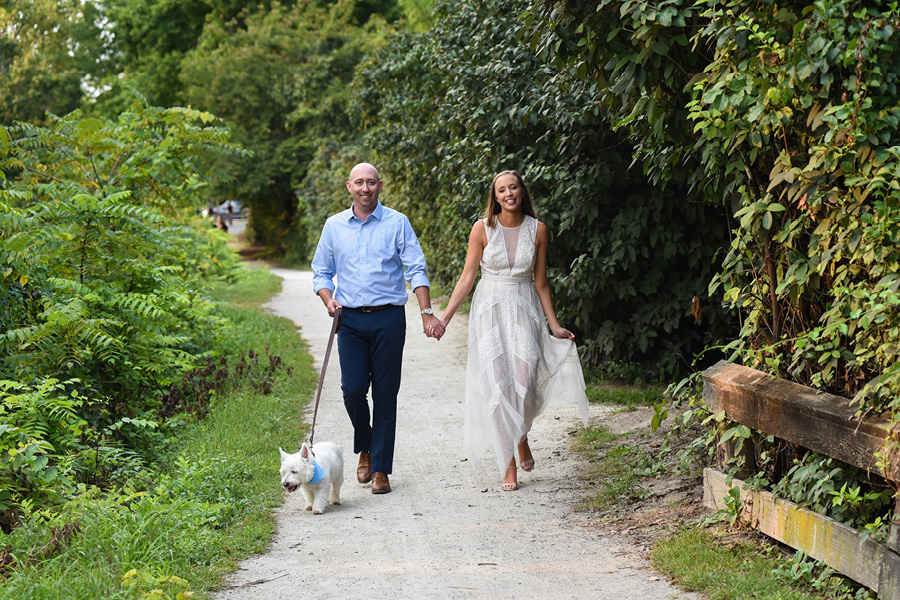 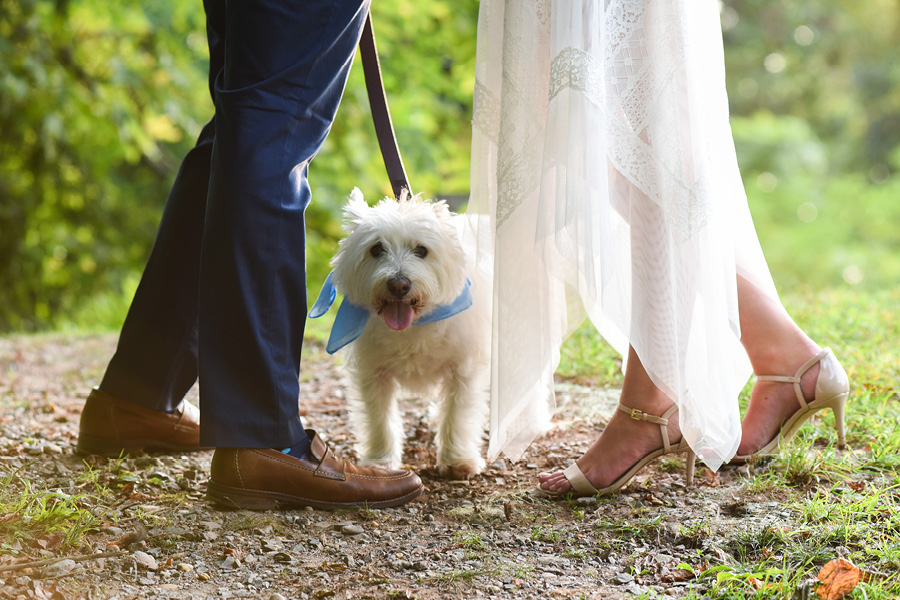 Their proposal story: Two years went by before Dan popped the question in May 2020. He had decided on the weekend six months ahead of time; he had hoped to stage the big moment along the canal in Lambertville (in front of a lock that appears to form a waterfall) then celebrate afterward with a private family dinner at Marsha Brown in New Hope. When the pandemic prevented that plan, he decided to set the scene on his rooftop terrace in Fishtown. Fresh flowers were planted; a bottle of champagne was chilled; and a takeout steak dinner was ordered. Dan also kept Stephanie off his trail by telling her “something big” was happening the following weekend. Needless to say, she was completely surprised.

The engagement-shoot locations: Because the couple frequently visited the Lambertville and New Hope area for a rural escape when they were dating, they knew they wanted to incorporate their special place. They narrowed it down to a few spots, including where Dan wanted to initially propose. Photographer Rebecca Barger mentioned a few additional locations, including an abandoned, graffiti-filled railroad car she’d wanted to snap a couple in for the past seven years. While Stephanie and Dan thought that it was a little risky, they trusted Barger and figured they’d give it a try to get that one-of-a-kind artistic shot, even if it meant there were some eyebrow-raising images in the background. 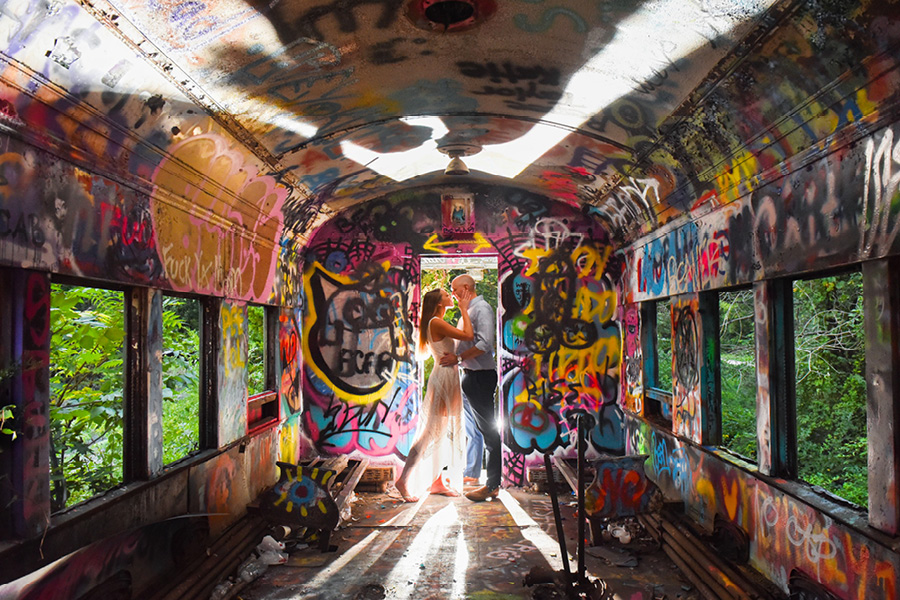 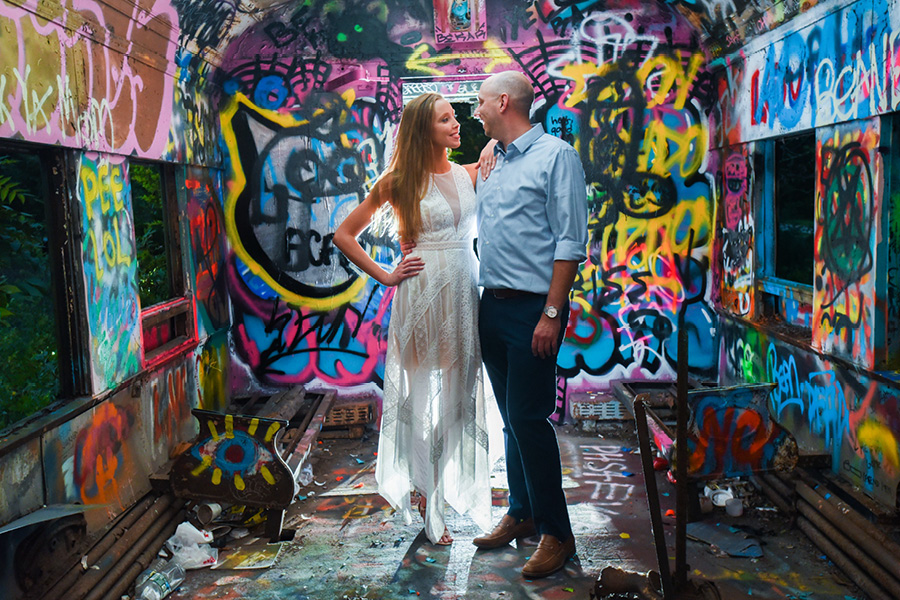 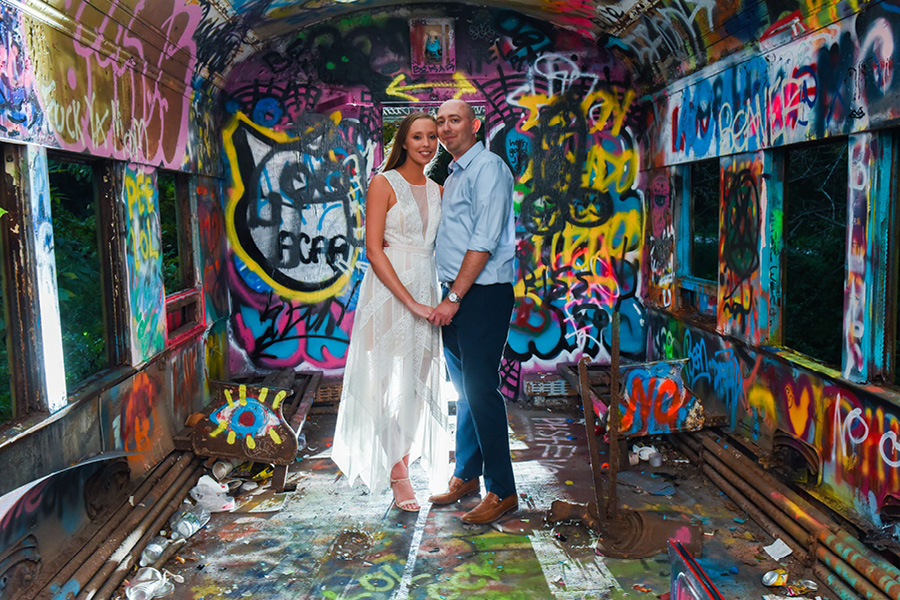 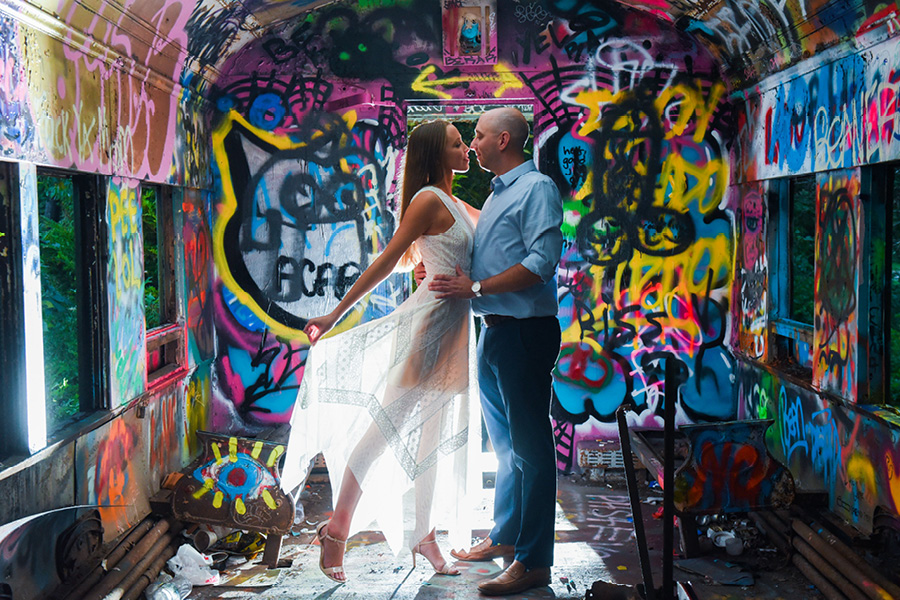 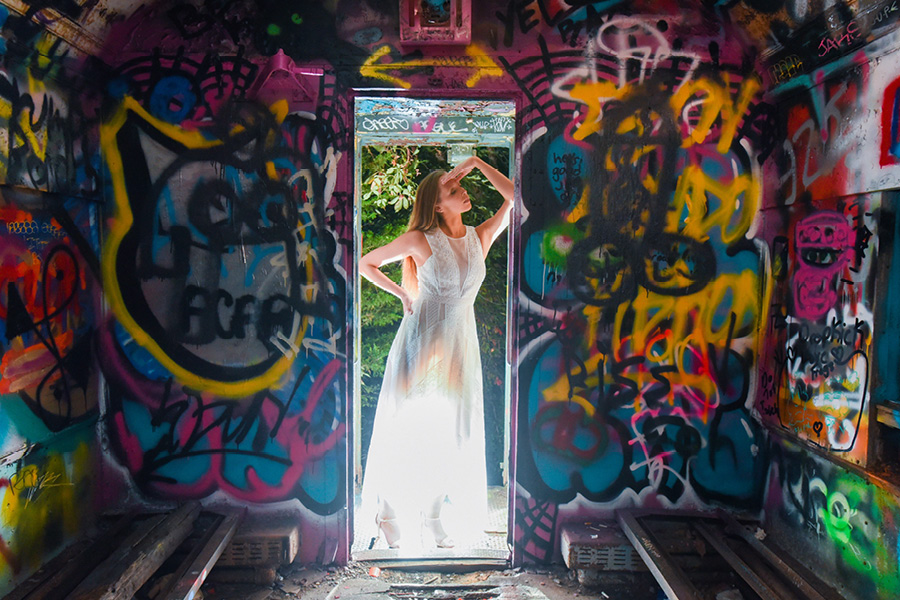 The attire: Stephanie’s dress in particular added a dreamy, ethereal contrast to the vivid colors and bold — and gritty — designs that surrounded the couple in the rail car. She chose a BCBGMAXAZRIA cream dress with lace netting. “I wanted a dress that was a combination of whimsical elegance and romance,” she says. She paired the frock with her ring from Vecere Jewelers in Lambertville and nude open-toe heels by Michael Kors. Dan was crisp and classic in a Banana Republic shirt, Bonobos pants, Johnston & Murphy shoes and a Tag Heuer watch.

The pup’s photo moment: Of course, Cooper had his time in the spotlight, too. Stephanie’s sister and maid of honor, Kelly Quigley, helped corral him, though he was pretty well-behaved. The initial plan was to snap a few photos with their four-legged friend then have Kelly take him home. Instead, Kelly (and Cooper) stayed the entire time and assisted Barger with the rail car photos. 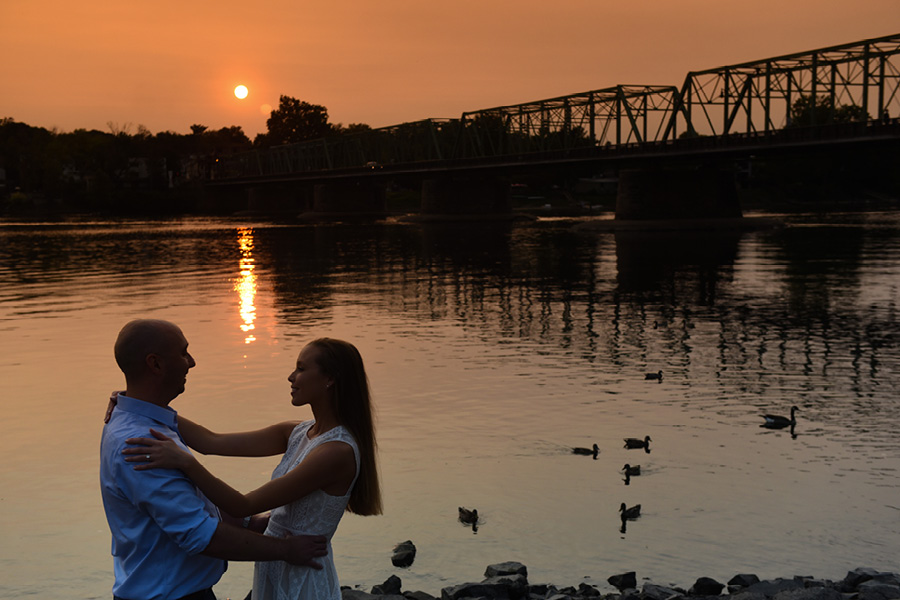 The Big Day plans: Stephanie and Dan plan to say “I do” on August 6th in the backyard of their new home, a historic facade in Bucks County. They will be having a larger celebration at The Ritz-Carlton Philadelphia on August 5th, 2022.