Two Limited-Edition Beers to Drink in Philly This Weekend

You've got two chances to sip some ultra-rare brews, including a West Coast rarity for charity and yet another hoppy homage to Gritty. 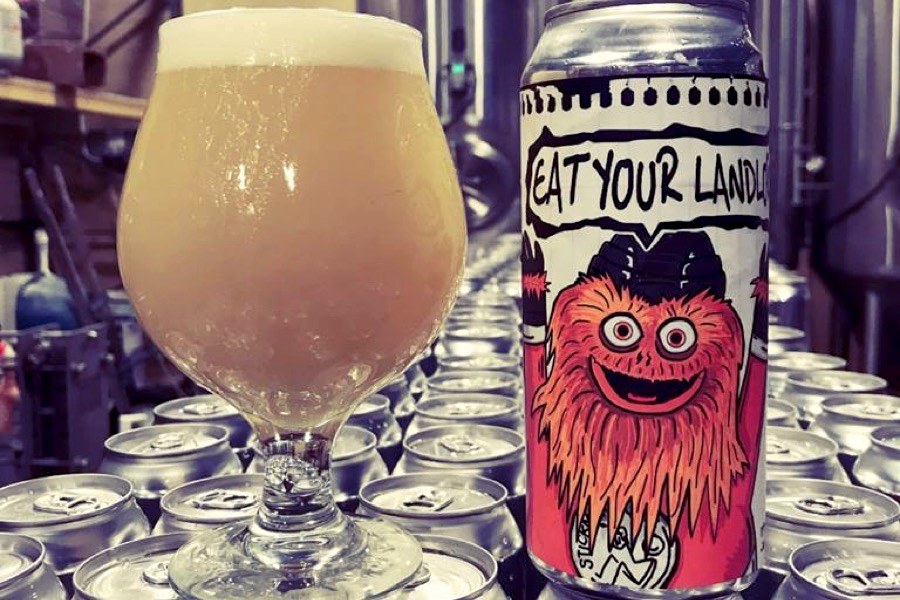 It’s a big weekend for super-limited-edition beers in Philly.

First, Royersford-based Stickman Brews has a new Gritty-themed beer dropping this weekend. Eat Your Landlord — with a name inspired by socialists’ affinity for the lovable mascot — is a fruity, melon-forward IPA with a pineapple finish, but no bitterness. It’s available to purchase in cans this Saturday, February 23rd from Stickman locations in Royersford starting at 12 p.m. and Chester Springs starting at 11 a.m. as well as their satellite location at Tony Joe’s House of Great Eats in Pottstown starting at 11 a.m.

Eat Your Landlord is the third Gritty-inspired beer we’ve seen since the eldritch hockey monster’s arrival on the scene last fall, along with Nightmare Fuel from Bucks County’s Broken Goblet Brewing and Gritty Gruel, made by South Philly’s Brewery ARS, who incorporated the hot fresh donuts from Federal Donuts and ReAnimator Coffee’s cold brew into the recipe.

Also this Saturday, February 23rd, beer nerds can head to Monk’s Cafe for their annual Pliny the Younger fundraiser and a chance to taste an ultra-rare, high-ABV brew you can’t find anywhere else on the East Coast from noon until 5 p.m. Russian River Brewing’s sought-after triple IPA is only made once a year; Pliny the Younger clocks in at 10.25% alcohol and is loaded with eight different hop varieties.

Monk’s will also have a slate of other Russian River beers on tap — they’re the only bar east of Denver to get any varieties from the beloved California brewery — like double IPA Pliny the Elder, Blind Pig IPA, a 2016 batch of Consecration, a brown ale with fresh currants aged in silver oak Cabernet Sauvignon barrels, and several others (see Saturday’s full draft list and get more info about the event here).

One hundred percent of sales from all draft beers from 12 .m. will be donated to childhood cancer nonprofit Alex’s Lemonade Stand, so you can cross of some of your bucket list beers while supporting a good cause, too. Be sure to bring paper money, because the fundraiser is cash only, and get there early so you don’t miss out.